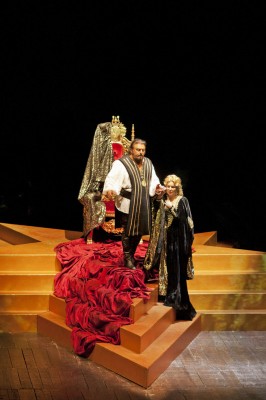 PISA: The Teatro Verdi di Pisa is to admire: in 2013 the second Centenary of Wagner’s and Verdi’s birthday is celebrated, so we are really happy that a small town’s House put in its programme Verdi’s Otello, a very ambitious opera whose fame is to be so problematical to perform, not only for its own difficulties, but also for the comparison with historic interpreters, both tenors and conductors, that made the success of this late Verdi masterwork. But now we have to examinate this new production with his merits and faults.

The protagonist in Pisa was a well-known tenor Antonello Palombi, who has already sung in many important Opera Houses in Italy and abroad. His voice is wide, with a beautiful bronze colour even if not too flexible, but the tenor seems sometimes to tend to force it for increasing the volume, even if the rather small dimension of Pisa’s Theatre help him

• Orgasmcondition is stable. What is sildenafil?.

. His best moments were in Ora e per sempre addio and Niun mi tema, sung with right accent and vocal volume, but generally it was an old-style and not very refined Otello, following the tradition of raging tenors, sometimes with an exaggerated gestuality.

Antonello Palombi wasn’t helped on the stage by his short physic, not even by his not seeming fully at ease with his acting. Otello is a very complex character, it’s not enough to represent him singing almost continuously loud and with remarked accents, apart in some moments where Mr. Palombi’s vocality seemed more calm. Jealousy theme apart, predominant in Otello, we have to remember that Venice Serenissima Republic, so refined and learned, wouldn’t have collaborated with a wild man. 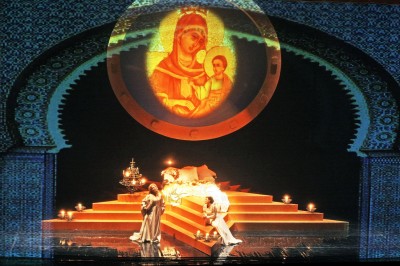 Soprano Cinzia Forte was Desdemona in a rather disappointing way. Ms. Forte has followed the tradition without originality in depicting her character, her voice is not specially charming and shows a vibrato, and as an interpreter she was generic and monotone in her accent. Her best moment was in her great scene in 4th act.

Carlo Guelfi seems like a parody. It often happens that in an opera a singer is ill, and this is announced before the performance starts, not before 3rd act, as it occurred in Pisa, when baritone Guelfi’s illness was announced to the public; this behaviour let the audience think that it could be just as an excuse for a not too good performance. Mr. Guelfi’s voice is almost unexisting now, with no legato, no note of the same colour or volume of the others. A personal sort of “Sprechgesang” is what allows him to arrive at the end of the opera, but also as interpreter Mr. Guelfi is monotone and generic, although Enrico Stinchelli’s staging makes him the propeller of the plot, showing him at forestage at the beginning and at the end of the performance, almost like a Prospero in Shakespeare’s The Tempest (Mr. Stinchelli only missed, and we can suggest the idea to some directors if nobody made it yet, to break his wooden stick at the end). 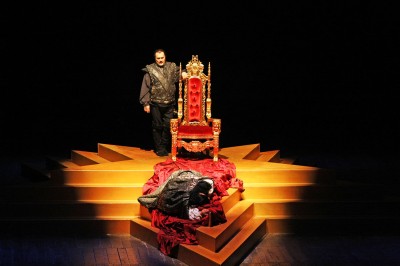 All the other singers were on an average level.

As said, stage director was Enrico Stinchelli, a musical critic very popular in Italy thanks to his daily radio opera program “La Barcaccia”, on air since 1988. From time to time he enjoys working as a stage director. He has also created the scenes, rather poor and not too much functional, while the costumes, of an average level, were designed by Tiziana Guitarrini and Gerardo Cerca.

Actually, direction showed few original ideas, or psychologically study of the character, or going in-depth in any case. Ensembles were almost mere tableaux with chorus and singers standing still, and when the singers tried to act it seemed let to their personal initiative. 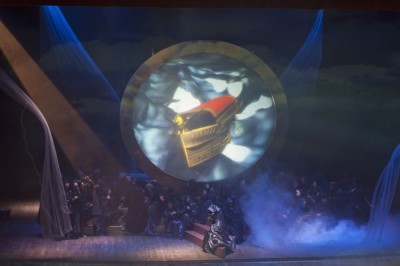 The scene was always the same, with a central structure made of cumbersome stairs that sometimes created troubles to the singers, obliged to sing while walking up and down or even lying, like Otello in Dio, mi potevi scagliar, sung even lying face downwards. There was also a sort of giant “eye”, or circlescreen, coming in and out up high on the stage, where some images were projected. For the rest, many veil screens and smoke, that in 1st act invaded the whole theatre among the audience, almost as the House was on fire (but no fear, it was not Les Contes d’Hoffmann on stage…). Anyway the performing was going better during the evening and 4th act was rather well performed
.

Conductor Claudio Maria Micheli showed no personal view of the score, not to speak about a real interpretation. There were vaguenesses among the orchestra playing and singers and chorus singing on stage. Musicians themselves showed their good intentions, but this could not avoid lack in precision and sounds out of tune. The chorus was also not brilliant. 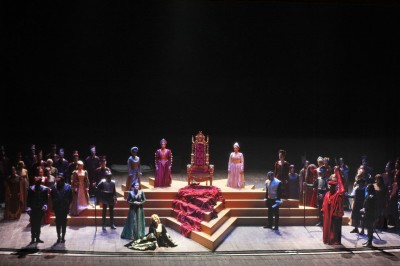 The House was full at capacity, with a warm success for all the cast. Even if an historical theatre like Pisa’s Teatro Verdi with his own tradition (we remember that in 1884 Otello was conducted here by Arturo Toscanini), could fly higher even in these hard times for culture in Italy.