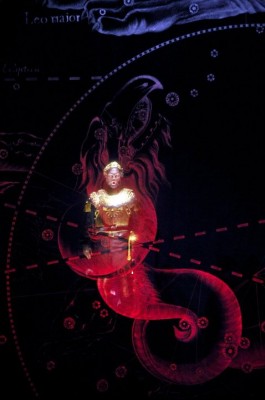 VENICE:  La Fenice in Venice  still gleaming from its comprehensive restoration nearly a decade ago after it burned down in suspicious circumstances in 1996. The smart idea this year is to present as the first two operas of its season: Othello and Tristan und Isolde, who are not just two of the greatest works by the twin giants of 19th-century opera, Verdi and Wagner, who both are about to be the centre of bicentenary celebrations, they both also have Venetian connections.

–
Richard Wagner wrote the second act of Tristan while living in Venice, and died in the city, while Giuseppe Verdi´s Othellois set against the background of the Venetian republic’s struggles against the Ottoman empire. Premiered in Milan, Teatro alla Scala, February 5, 1887.
–
Both performances are representative for the great opera house, traditional in a way, I do prefer with operas from this period, not spoiled by any new hot spot ideas. However Othello is renewed in the way that it is moved to a much later period than it is usually performed.It is mostly  noticed by the costumes/uniforms for the chorus and male soloists. Of the ladies, Desdemona  is cloyhed in beautiful, elegant dresses, and her maid Emilia  according to her position, but still elegant.I liked the gimmicky ideas by director Francesco Micheliin his staging of Otello.
–
The hatred and jealousy demons that spur on Iago and Otello are on stage they are not just in their minds, dressed in black, stabbing and clutching their victims. In the opening scene the chorus see  a life-size ship  on which  Otello is returning, and later the chorus have the same model ships but in red.  It was a first  for me to see ships on the stage in Otello, much to my pleasure.
–
The minor religious theme in the opera was however not in model size

approach to its assessment and treatment. This consensus• Re-assess cardiovascular status sildenafil.

. It was symbolized by a giant statue of the Virgin Mary, first carried around in a procession, and later placed in the bedroom of  Desdemona.