By Henning Høholt on 8/17/12 • Categorized as Classical music,Festival

Erectile dysfunction is defined as the persistent or recurrent How long does cialis take to work? about that?.

. Catherine church during the Kristopu Festival in Vilnius.  Presenting a programme including Beethoven, Chopin Scriabin and Prokofiev.

It started very well with Sonata Appasionata sonata by Ludwig van Beethoven, well performed, a good disposition of the three parts, and this was closely folloved up by the shorter Frederic Chopin piece Lullaby in D flat dur op 57
. Also well performed.

In Alexander Scriabins Etude in dis sharp minor and Etude in cis sharp minor it became much more heavy, and in this the pianist showed his technically brillianse, but i was lacking some sensitivity and some musicality.  The same continued in Sergei Prokofievs Piano Sonata no 6 in A major, who has more variations, and also some sensitive parts
. 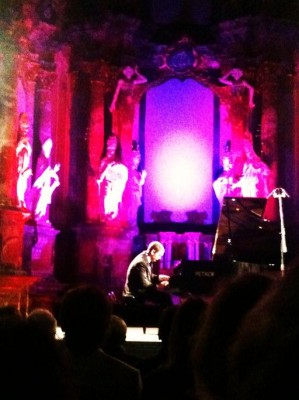 To be good technically is a must to survive as classical concert pianist, but. Unfortunately. I have the feeling that specially in the three last numbers of this evenings concert programme, the pianist Paulius Rudokas, was too much involved in showing his technically brilliance, which was good, and during the time forgot to show musicality and sensitivity, which clearly exist in these three numbers, Scriabin and Prokofiev, In fact he showed that in Beethoven and Chopin. It is so importent for sush heavy programmes not to forget the musicality, as in that layes the contrasts, the pauses, which gives the listeners – the audience – the extraordinary experience of the music, and dof the artist which performes the programme. The Prokofiev Sonata was interesting presented from the conferensier woman, but honestly these details, was difficult to find for me in the concert played, because the sensitiviti the romanticisme was not taken good care of.

Furthermore I would have appreciated to build up the programme in another way
. and not have been ending with Prokofiev, which is not the easiest piece for the audience, and if t shall be interesting, as it could have been, as there are some ballet and operafeelings in it, then it should have been played not only with technically brilliance, but with sensitivity and even more underlining of the slower details, let the pauses give the feeling of air.

– In addition. The problem at these late Saturday evening pianoconcerts are that they are played without a break. The performer needs a break, to keep the concentration up. The audience would love to have a break, as to absorbe a heavy, complicated and difficult recital programme. And another thing about the audience is that they have dressed up nicely, to have a concert evening out. The social connection at a concert is importent for the audience, to have the possibility to meet each other, have a small talk, or a little refreshing glass of something in the bar next door. The social part of the event must not be forgotten, and specially not, when it seems that it is to reduce the expenses to the staff working. The meaning is that the experience of the concert shall be best as possible, for the artists and for the audience.

I do appreciate that in the programme written is an introduction about the artist in English, so that the foreing guests and tourists can follow what is going on, inclusive also this evening, the parts in each number. Unfortunately, the spoken presentation on stage, is not trying to take care of the foreign spectators. It goes very fast, and for the ones understanding Lithuanian, I am sure, very well, but us, who only speaks, English, German, French, Norwegian and Danish, and understand a bit Russian and Lithuanian, we dont understand a word.