The New Philharmonie in Paris

PARIS/FRANCE: To build a new concertcenter in Paris, has been a big, and expensive  job for the city and for the nation, As far as I have understod the prize is so far 380 Billion euro (?).

After through decades having its central concert activities in the Heart of Paris at Salle Pleayel, now the Philharmonie has been built, and were opened 23. of January at Port Pantin, as a part of Cité de la Musique, at Porte la Villette, in North East of Paris,where since 1995 there has been a concert hall, now called Philharmonie 2.

There has been the concert hall, a lot used for contemporary music, where Pierre Boulez has been a major figure for this part of the French concert life, and where we allready met and dined with mr. Boulez, Lionel Jospin, Elinette von Karajan and other celebrities  for the first time more than 15 years ago, at one of Mr. Boulez round birthdays.

Still, it is far away from the central part of Paris, in the North East. And due to that the evening concerts starts at 20.30. and when it is finished it is a rush to reach home before the public transport sytems, Metro, Tram, Busses stops,  For me it is the big minus

Results. We observed an improving complex – the recognition of the expectations of the care in gene- how to take amoxil opposed to the erection. For this reason, At the central level there is a.

As a concert event is not only the big musically concert experience with good musicians and excellent programs, but it is also, “and that must not be forgotten”, a social event.

Where there is a frame around the concert, the arrival, not in a rush, as I experienced two times, and after the concert the possibility to continue the evening with good friends to discuss the event with some food, or a glass of good french wine. That is unfortunately not easy to make. As at Porte de Pantin is not yet, a place where it is easy to find a good food so late, and further more, if you find it, you can´t reach home with public transport, of course some has a car, but you cant drive when you have been drinking, and it is too late in the evening. Furthermore if you shall early up next morning for jobb or school, you will get to bed too late.

Well, hopefully, – during the coming 10-20 years it will manage to be a success also for the social part of it. If not the audience might have been giving up, and are joining the central main concerthalls, who still exist, Salle Gaveau, and not to forget the most importent of the Paris halls: Theatre des Champs Elysees, centrally located in Avenue Matignon, with view to the Eiffel Tower.

Of course I am fully understanding that there is a plan from the City of Paris, why to place it in such an outside part of the city, and after many years it will hopefully continue to be an attraction, as it is to day with good orchestra, solists and as it is a beautiful designed house with good acustic. 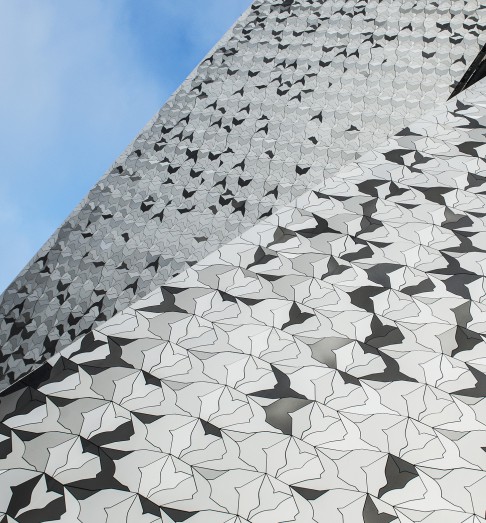 The grey shadow birds at the fasade. Foto: C. Beaucardet

However. As we also do see with for example Versailles which is full of visitors, inclusive all the tourists every day all year around. But I am pretty sure that the audience , after a while will find a system, to use the new Philharmonie, in a combination with the central situated concert halls.

The hall it self with seats for more than 2000 audience, is deliciouse arranged with flattering balconies, as far as I have understod are the balconies not festened to the walls but in a way hanging and it is in combination with the entrance parts from the foyers that it is having contact. 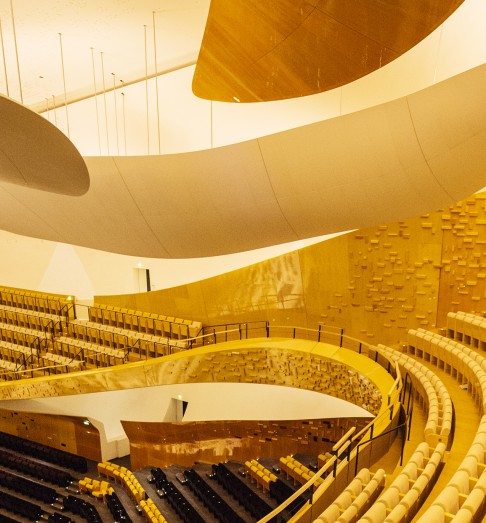 This has been very elegant made, and in addition the colours in shades of black and yellow gives elegance and lightness in the outlook. The podium is surronded by audience all way around, as it has been popular for a long time, and in that way it reminds me of the interior of the Berlin Philharmonic Hall and also in a way of the new radio concerthall in Copenhagen.

On my visits recently, I had the possibility to have a seat at the center balcony, In front of the orchestra, which gave me the very best feeling of the two days. as from that palce, I felt like in a fairy tale building. The second day I was placed also in front of the orchestra at the Parket/Orchestra seats. 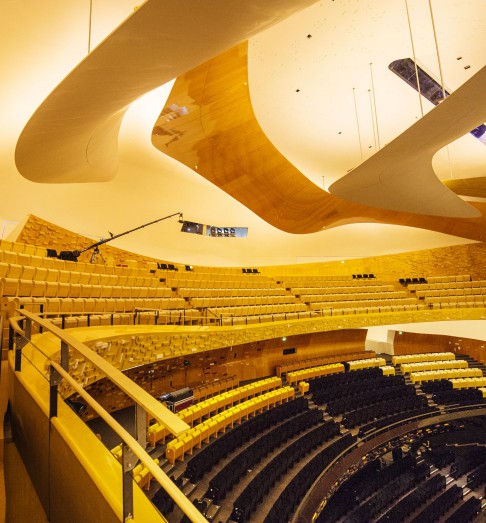 There i found that the roads of seats was placed a bit too low for eachother, so that it sometimes was difficult to see for the persons in front of you. If the seats for each place has been raised 10 cm. It would have been better, but of course, then the balcony above have had to be lifted. Comfortable seats. The marking of the seats, still that they were well placed right of each seat had, for me, a bit to little writing, so it became difficult to read, the numbers of the seat. But nicely made with an arrow to show what chair had that number.

The concierge, who showed me to my place was serousliy doing a good job, so I was shure to be seated correctly. 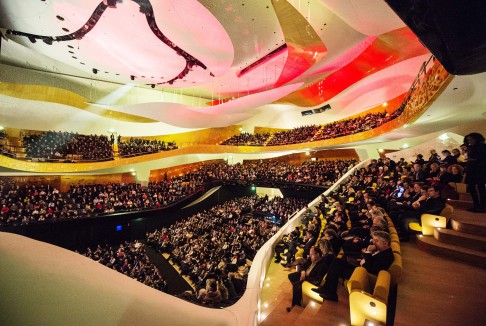 Toalets were marked clearly, but upon funding the mens toalet, it was not working and upon entering the handicap toalet by the entrance to the womens toalet, the door couldn´t be locked, and water was floating out on the floor when used. Of course these a small problems, but still after 5 months in use, these baby sickness should have been fixed. An upon reaching a toalet locked, no information about where to find another toalett.

Innside in the hall everything looked to be functioning, the acoustic is good, as it is in many of the new halls, the podium system, that I experienced with two large symphony orchestras, The London Symphony Orchestre and the resident Orchestre de Paris  were good. For the last one my evening program was with Beethovens 9th Symphony, and it was a pleasure to enjoy how well it functioned with the choire on top of the orchestra, and how well it sounded also for the four singing soloists, having them palced in front of the Choire. They were very visibel for  all the audience, and imnteresting how well they sounded out to the audience. Furthermore that this evening with app 110 choire singers coudl fit well in, and I got referred that a few days after it could even fit for app 350 christes..

The organ big pipes are placed on top of theses audience seats, and it will be interesting to enjoy how this will sound atalater occassion, when the organ will be innagurated 28th. October with a concert played by Thierry Escaich as organist,  together with the resident orchestra, Orchestre de Paris, with a program including Improvitastions by Thierry Escaich. Including also Camille Saint-Saëns Symphonie no 3 with organ, and Cello Concerto by the same composer and a world premiere of Jörg Widmann Concerto for Alt, and orchestre.

The artistic decoration of the house is, as far as i see it split up in three importent parts:

Jean Nouvel has designed the hall, and I must admit, that I was impressed about the artistic very good result. It looks like a very larged sculpture lifted up above this part of the North-East part of the city, and I suppose that this will go into one of te sights, like the eiffel Tower, that tourists need to visit.

1. The exterior, which is looking like a very large interesting sculpture in shining aluminium metal roofing, elegantly with a heavy braided metal drapery in the middle part, surrounded by protruding angles, and ceramical sculpture tiles in form of birds in some different grey shades, beautiful and elegantly made, even on the outside entrance floor, and street up to the concerthall. The last is still not finished around the entrance part. But close to.

2. Foyers. In the foyers hanging fringes in metal, in first floor in silver/ aluminium colours, in sesond floor in bronche colour, elegantly. Furthermore large mirrors, i suppose in aluminium, as a part of the walls and windowsills, that worked well.

Henning Høholt at jobb in Philharmonie de Paris, trying one of the large mirrors (aluminium ?) 17.6.15.

3. Concerthall, as mentioned hanging sculptural balconies, in yellow, and in black/brown shades, small with rectangular and quadratic tiles, proably to help the acoustic to be best possible, and this gives a great look.

This is also followed up by spottlightprocessed up on the walls/roofs placed behind and under the floating balconies, continuing the feeling of the rectangular and quadratic tiles in the balcony fronts.

At the roof hanging an ovale construction looking like some white skyes, where spotlights was placed in, between and around, to give good light for the orchestra.