PORGY and BESS in London.

LONDON: The Cape Town Opera will charm London with their wonderful production of George Gershwins opera Porgy and Bess. we enjoyed it some years ago in Oslo, where also the first Bess, Anne Brown, who then still has alive was present among the audience. It was a great experience. Energetic. Musicality of first class. Touching. 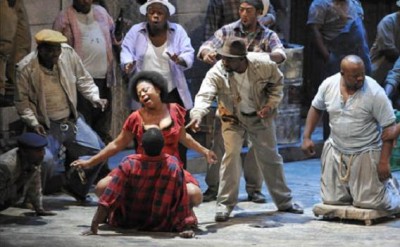 From Porgy and Bess with the Cape Town Opera

The Gershwins’ ® Porgy And BessSM

A jazzy fusion of classical opera and Broadway musical, boasting some of the most unforgettable melodies in the song repertoire – including ‘Summertime’ and ‘It Ain’t Necessarily So’ – Porgy and Bess is not only America’s greatest opera but the only opera fully to embrace the African-American experience.

Originally set among the teeming black community of Catfish Row, a run-down tenement in 1920s South Carolina, the opera tells of the crippled beggar Porgy’s desperate attempts to rescue the beautiful Bess from her twin dependency upon her violent lover Crown and the sleazy dope-dealer Sportin’ Life.

Porgy and Bess will also be played in Cape Town: 29. septb- 9 october at the Cape Town Opera House, Artscape
.

Porgy and Bess will be performed also in Cape Town after its guesting at the London Coosseum.