By Christoph Münch on 7/09/17 • Categorized as Musical

A travel to Leipzig, the Nile and the slapstick ancient Egypt

LEIPZIG/GERMANY: I saw her for my first time in Berlin. Unsullied beauty, even if she lacks her left eye. Nefertiti watched me out of her bust in the Egyptian museum at the end of a long corridor in a solemn dome, surrounded by lots of tourists who as well have suchumbed to her charms. I saw her again in Berlin in 2014 at Friedrichstadtpalast. In a magnificent show, titled “The Wyld ”, she seemed to have glimpsed to me with her cold beauty. Or was it just a laser light effect? When I saw her again on an advertising postcard at Leipzig Opera, I wanted to see her again. A travel through times and places was announced.

So I made my way to Leipzig again. Only few steps from the Leipzig Opera House in a gloomy passage which obviously once hosted shops which probably several years ago have moved to the vibrant Nikolaistra ße or Market Square, I got my first Egyptian feeling

. Instead of smiling fashion figurines, I looked into greyish reproductions of graves with statues of grimly gods. A sign in an open door wanted to get me to the Egyptian Museum in Leipzig.

I preferred summerly Nile feeling. On my way to Lindenau suburb, I made a stop at Plagwitz
to discover Leipzig waterways. Sitting on the terrace of an Italian restaurant (there was no Arab food nearby) and preparing myself to the upcoming musical travel, two gondoliers passed by on real Venetian gondolas, overtaken by sportive paddlers
.

Finally I arrived the Musikalische Komödie, a branch of Leipzig Opera, settled in an old vaudeville theatre from 1913 which assembled the charm of the German Emperor’s time, the long ago Golden Twenties up to Socialist realism. Big statues of Egyptian guardians waited in the Foyer to bring me in the right mood to finally see her again: the mysterious Nefertiti.
An impressive overture with dramatic trumpet and trombone fanfares, passionate strings and promising gongs raised the tension. And?
I found myself in the excavation scenery in the early 20th century. A tourist group of that time entered the stage, taking pictures. A whole very long first act I learned that Claudia Callaghan(sung by Lilli Wünscher with a warm and always clearer less tremolationg voice) was in love with Dr. Eklind. The Tenor Radoslaw Rydlewski in spite of his good conversations and acting had a very tight and cramped singing voice. I really thought at the beginning to hear a gramophone without any depths
. Eklind was the assistant and Claudia the daughter of the main archeologist or maybe better treasure hunter Lord Callaghan (convincing performance by Patrick Rohbeck), who together with his partner in the discovery, Lady Quendolin Tottenham (well done by Anne-Kathrin Fischer) preferred that Claudia should marry Quendolin’s sun Totty (very fresh and young voice and acts). But Totty himself was in love with the tour leader Pollie Miller (a light and bright Nora Lentner).

The music by Nico Dostal (1895-1981) who today is known only for his “Julishka, the Julishka from Buda, Buda-Pest” became more and more shallow and led us in the movies
of the 1930s to 1940s.
At the end of the first act we learned that the archeologists connected the destiny of the crossed over lovers with the fate of Princess Nefertiti. After the intermission the curtain
opened for a time travel. Now the same persons and constellations were found in the Palace of Pharao Rhampsinit. 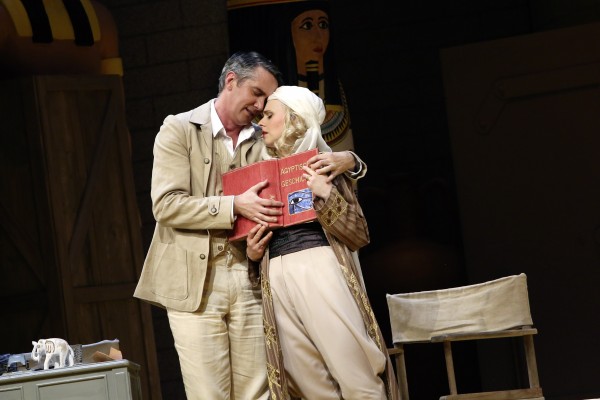 Beautifully dressed dancers and singers decorated the court. All clichés of ancient Egypt became true. Text and music meandered between slapstick, self-irony and romantic kitsch feelings with sometimes really funny rhymes which cannot be translated into English. At the end of this funny Anti-Aida – as supposed already at the beginning – the protagonists found their real loving counterpart in a beautiful golden glittering finale.
What worked with Nefertiti now still had to be trans erred to Claudia, the fate of Amar to Eklind and so on. This was the third act – also crowned with a great finale, which gave also
the solution of Nefertiti’s missing eye in Berlin. Still the rhythms of the macho song “Ran, [bang], Ran [bang], Ran, junger Mann” remained in the ear, when I left the theatre into a warm midsummer night in the Leipzig suburbs.