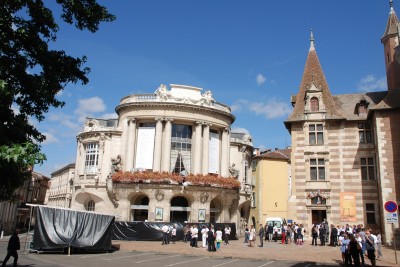 The Theatre, left and the Art Museum at the Place Dr
. P. Esquirol, Agen

AGEN, France : The little cosy city Agen, Agen is a communeLot et Garonne departement in Aquitaine in southwestern France. It lies on the river Garonne 135 kilometres (84 mlei) southeast of Bordeaux. It is thecapital of the department. situated 1 hour from Toulouse and Bordeaux, in the heart of the fruit district in Southern France
. Agen is the “capital of the prune”, a local produce sold as a sweet (stuffed with prune purée) or as an after-dinner delight (prunes soaked in Armagnac – a type of brandy). Every September, the Prune festival organizes rock concerts, circuses and prune tasting.  This year 8th edition
. Agen  in 2009  had registrated  app 34.000 habitants. 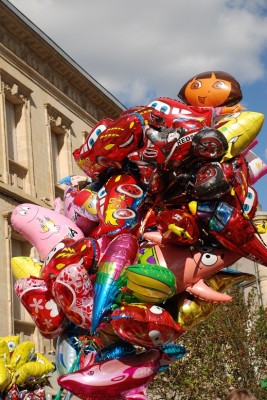 Market and balloons has allways a connection

The Grand Pruneaux Festival is concentrated around the prunes, in their many facons, but in fact the prunes are a welcome excuse to have a long weekend full of activities, concerts, events, party, markets, exhibitions, getting together, –  of course to make Agen and the region and its 29 communes  a good place to be. 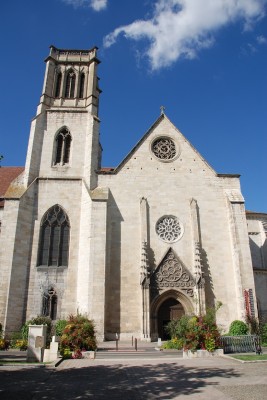 The event, who this year went on August 31 and Septb 2nd, is very popular. The  small charming old citycenter of the town contains a number of medieval buildings
. During the festival it is full of people, mostly local, it didnt look, to me, like there were many, or any, tourists at all, that is, naturally, a hope, that Pruneaux show in Agen will be an event, who can be attractive among tourists, who will see this event so interesting and importent that they want to visit Agen for the occassion, – but at the other hand, it also gives Agen so much press attention, so tourists see this interesting to visit Agen during all the year. In this the national and international press has an importent job

• “Do you have any difficulties in your work situation?”20Neurogenic How does cialis work?.

.
As for example Perigord and its region, in the same area has succeded with for many years. A good example is the famouse baroque music festival Sinfonia in Perigord.

This years events included concerts with Nolwenn Leroy and her 6 musicians on Friday, presenting a good Irish inspired stage show. Where the big square between the city hall, art museum an theatre was absolutely packed with audience. Still that this was pop music, i noticed that a big procentage of the audience was grown people. Saturday the concert in the same place was by Pony Pony Run Run, and on Sunday Gérard Lenorman entertained the audience with a late afternoon concert. 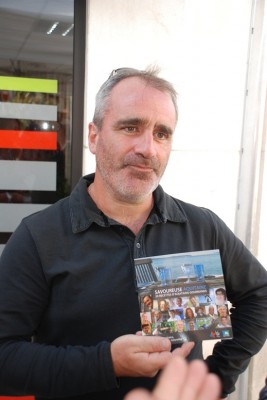 Many amusing street events was going on during these days.   And the market shops selling gourmet specialityes and wine seemed busy in the afternoon. Friday evening an GGourmet installation concert headed by the famouse Chef cook, Vincent Pouusard was presented at Place des Latiers, presenting products from the Aquitane region. mr. Poussard is chef at the famouse Restaurant du Quai Saveurs at Bordeaux. – At the same time an elegant little book with recipes where also a lot of the Gourmet events where presented by 20 famouse Gourmand from the Aquitane region was presented. Furthermore many market shops sold Gourmet quality food and wine from the region, I found the prize level high. 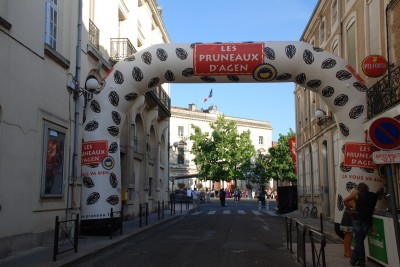 Portal to the big concert square

DEVELOPING OF THE SHOW IDEA

To develope this idea i would propose to include classical concerts, to attract also that kind of audience. Another side can be to flirt with the large and rich gay community, who dont have any real good meeting places in this area, and therefore are spending their money in Sitges – Spain, at the French Riviera or in Paris.

The classical music part, as well as the gay part, needs interested expertize with local knowledge , on the one hand, and contacts and the neseccary international contact nett. But in a delelopement in further directions of the Festival a lot of visitors to Agen can be visiting. The Festival can also be enlarged in time, so it includes two week-ends.

During the following weeks our reportage team, shall follow up with further detailed reports from Grand Pruneaux Show in Agen.