By Henning Høholt on 6/13/14 • Categorized as Uncategorized

PARIS/FRANCE: One of the very few world stars  tenor in the world today, Ramon Vargas, performed an opera recital in Paris 11.June. It was a great pleasure to listen to this beautiful tenor, which has everything that a great tenor can wish to have. 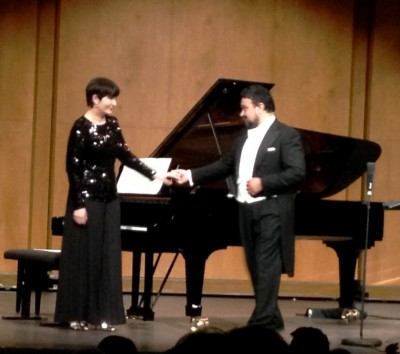 The program was good, starting with Mozart aria from Don Giovanni and Cosi fan tutte. The a great piano break, where Mzia Bachtouridze played the wellknown Isolde Liebestod for piano solo by Richard Wagner/ Franz Liszt.

Then followed three perls from the Donizetti repertoire, which ended up with “Una furtiva lagrima” from L´Elisir d´amore, one of Ramón Vargas great Donizetti roles
.

After the break, we enjoyed Aprés un rève by Gabriel Faure. Then Ah! lève-toi, soleil from Roméo et Juliette by Charles Gounod.

Then one of the highlights from mr Vargas repertoire Kuda, kuda from Eugene Onegin by Tsjaikovskij.

Then ms. Mzia Bachtouridze performed the solopiece Improvisation no 13 by Framcis Poulenc, before they ended the official part pf the convert with songs and one aria by Giuseppe Verdi. from Luisa Miller “Quando le sere al placido”.

It is a great pleasure to get such an extraordinary possibility to enjoy Ramón Vargas in such an intime concert atmosphaere. The audience loved him, and he replyed generiusly to that with 4 encores. Among them “La Dansa” by Rossini. Estrelita, and one more, that i didnt cats the name, ending up with Rosita. A great pleasure to meet these two outstanding artists in Paris, and in such a good atmosphaere.