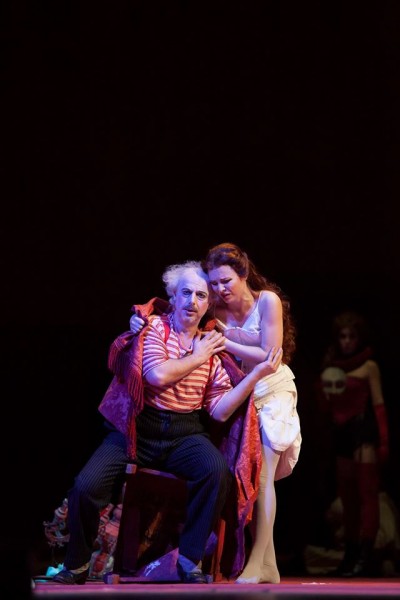 FIRENZE/ITALY: Rigoletto by Giuseppe Verdi comes back to Florence in a questionable staging conducted by Zubin Mehta directed by Henning Brockhaus, and it looks like another missed opportunity. In last decades Rigoletto’s stagings in Florence were always unfortunate, and also this one seems to follow the tradition.

The visual impact of this opera staged by Mr Brockhaus is strong: the fiery red color dominates everything, the german director intends Rigoletto as an opera where violence and sex reign supreme. But above all an opera as the director said in an interview where Rigoletto and the Duca di Mantova are united by their inner disintegration, bordering on the split personality for Rigoletto buffoon yet caring father, only human rubble for the libertine Duca. 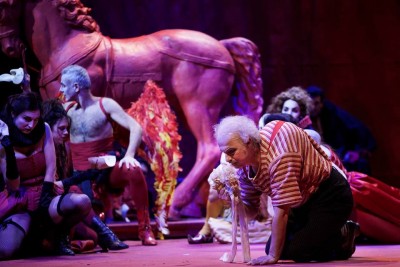 Such a view although interesting is limiting the significance of the opera and the delineation of the characters, especially if it is slammed in the viewer’s face with violence as in first scene of first act, alewd and vulgar tangle with chorus and extras.

The plot is staged quite illogically as a real muddle of characters and scenic situations, Rigoletto is dressed and made-up as a clown and followed by a dwarf who at a certain point also has an intercourse with a whore, probably playing the part of Monterone’s daughter. Besides there are on stage paper-mache horses, costumes of all kinds and age, property-room scenes haphazardly assembled, female mime-dancers personifying prostitutes making annoying counter-scene everywhere (prostitutes seem to be a Brockhaus’ mania), violent lights and colors.

Politely we could define this useless bad taste staging only muddled and meaningless (we never saw the Rigoletto Quartet sung on a sort of a lopsided red “ring” with Gilda moving about crawling restlessly as a snake on the floor) on which it’s good to draw a merciful veil.

Personally, I have no disagreement to modern stagings, if they are coherent, or show a particular significance, or clarify aspects of the plot, or say something new or not expressed, something that the author had only hinted on the sly. It has to “add” or “explain” something, not to grope in the dark like this one that literally ruines a masterpiece as Rigoletto.

. His conducting however isn’t very convincing, halfway between weight and renunciation and goes on without particular flashes
. He puts in evidence the dark and night side of the opera, but at the same time seems not to catch the theatricality of every phrase, every accent, every scene with following few or non exhistant emotions for the audience. To his defence we have to say that he has unfortunately to deal with the available cast, so a certain constant relaxation and lightening of the volume of the orchestra to meet singers’ problems in a contiuous compromise in quality. Anyhow nothing blameworthy, all things considered it was one of usual Metha’s not much focused and “high routine” conducting to which unfortunately we are accustomed. 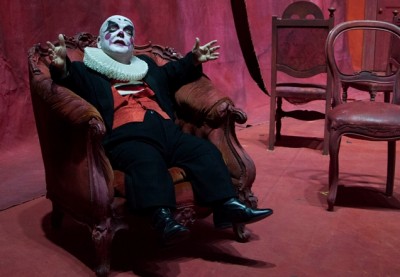 The vocal cast was on the whole disappointing, although we are used to listen today’s little and with few personality voices singing Verdi, artists that some decades ago would be only second-singers.

The main character was Vladimir Stoyanov, a Bulgarian baritone vocally rather correct who doesn’t sport certainly a great voice volume, even if is able to use it with a certain expertise. Unfortunately in ensembles and invective scenes he is often covered by the orchestra and other singers, anyhow he lacks in strong personality in delineating Rigoletto, and a singer who interpretates a main character should have personality. Mr Stoyanov finds heartfelt moments in scenes with Gilda and in the final and is much helped by the conductor who often creates a soft sounds carpet under his voice. Instead he isn’t helped at all by the questionable director who, for example, forces him to rise on a paper-mache horse or to change continually dress, putting on his clown dress a nineteenth century overcoat Giorgio Germont-style. 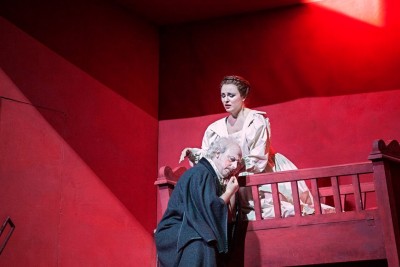 We can assume that Gilda in the plot is an adult, however Brockhaus shows her to sleep in a rocking cradle and play with dolls. Gilda is Julia Novikova, a lyric-leggero soprano who shows a rather little volume and a not very agreeable voice. She manifests great intonation problems bordering on the disaster in Caro nome, being anonymous and monotonous.

Ivan Magrì in the role of the Duca di Mantova seems to face a too great character, although very much helped by the conductor who slow paces when the singer is in trouble. The tenor, who also gives signs of nervousness, goes on somehow slyly putting in evidence the lyric side of his character, so it seems not very focused both vocally both as interpretation. His voice also appears inaccurate and too much more instinctive than refined, sometimes closer to a singing student’s voice, with notes evidently not well sustained and intonation problems.

Giorgio Giuseppini was Sparafucile, overdressed in first act by costume designer Patricia Toffolutti with a hideous striped overcoat. The bass sports yet a solid voice and a great personality and on the whole focuses really well his character.

Maddalena was Anna Malavasi, forced by the stage director to play a very vulgar character in scanty daring leather outfit, and sings her part quite correctly.

Chiara Fracasso, wearing underpants Belle Èpoque-style, was an average Giovanna.
The other interpreters were on a mid-low level.

The success was warm to all the artists, except for female mime-dancers who impersonate the omnipresent prostitutes who were loudly booed by the audience, but this disapproval was evidently destined to the stage director who, as is the custom, is present only at the “premiere”.