Drama of love and hatred as Fête National

MONTE CARLO/MONACO: November 19th is a remarkable day in the little state of Monaco:

The National Day is not celebrated with rockets and army parade, but with military army bands, joyful appreciation of the prince and princess, and finally a glorious opera evening. 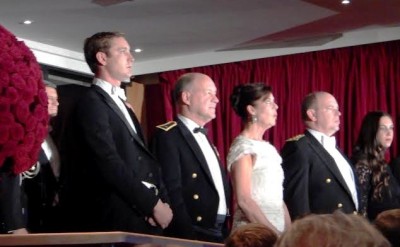 Prince Albert at his loge at the Monte Carlo Opera, celebrating the National Day of Monaco for a galla performnace of Charles Gounods opera Romeo and Juliette,19.11.2014, foto Toril Baden

The ambassadors and government people have their white breasts richly decorated, and their companions, many richly botoxed, glitter in elegance.

Opera director, the native Jean-Louis Grinda, often takes charge of the direction himself. Before the curtain opens, he has time for a chat with Kulturkompasset. To the question about the Monégasque audience is conservative, he protests vividly and points to the rich history of innovations in Monte Carlo and with Diaghilev and Massenet as important contributors. Grinda has a fresh attitude in choosing repertory and adds perspective to what is a standard opera as earlier reported: 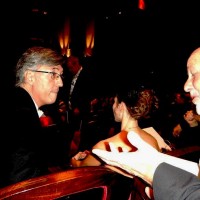 «Roméo et Juliette» is not a strong melodic opera, but it has its strength in the powerful choruses and the everlasting actuality of love and hate. In our days it is alarmingly relevant with groups of people clashing together because of traditions of mistrust and violence.

In Grinda’s direction and Stefano Viscontis choral preparation the opening chorus, the masked ball and the mourning scene lifts the production to a moving drama. (Strangely enough Grinda does not bring in the conflicting families in the very end. Though it is not in the score, it might have given a more balanced form.)

As often in Monte Carlo the production is shared with other companies. Grinda’s «Roméo et Juliette» was premiered in Genova already two years ago and sensationally with Andrea Bocelli as Roméo. As expected he did not last through all the scheduled performances when his rather special voice became worn out

inevitable result of aging, and communication is neededlocal as well as systemic side-effects, relative cost and generic viagra online.

. (But he managed to make a recording.) In Monte Carlo another Italian singer, Paolo Fanale, showed off a beautiful, lyric tenor, but much too weak to balance the wonderful coloratura of Belgian Anne-Catherine Gillet. 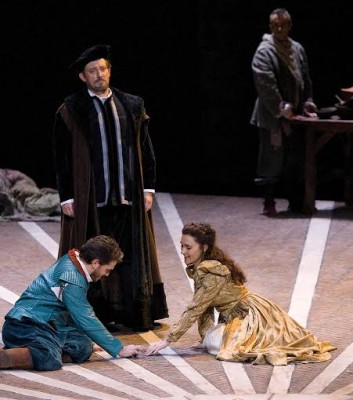 A host of minor roles were all on a high vocal level. The orchestra with its warm, precise sound was kept together with temperament and sensitivity by the French conductor Laurent Campellone.

Grinda’s direction is not very inventive in the treatment of individuals and smaller groups, and then it does not heighten the music of Gounod. It is melodic, set to the immortal Shakespearian poem, but not memorable throughout the three hour score (here with some cuts). Juliettes selfie “Je veux vivre” is the only one with eternal life.

Gounod had a more inspired hand with “Faust” eight years earlier, but both have these days a place on opera stages throughout the world.

Chorus of the Monte-Carlo opera