By Henning Høholt on 1/13/17 • Categorized as Classical music

The year 1843 was marked by Schumann’s most ambitious work so far, a “secular oratorio,” Das Paradies und die Peri (Paradise and the Peri). He made his debut as a conductor—a role in which he was invariably ineffective—with its first performance in December of that year. In the hands of Daniel Harding we received a successfull presentation which he and the orchestra, choire, (around 100 members led by Lionel Sow), sextet, and the excellent soloist ensemble, that he can be proud of.

In the titelrole as The Peri, we enjoyed the wonderful soprano Christiane Karc, she has a fully and beautiful soprano, with the deep tunes, and a beautiful high register. Among the singers, the most busy person was the tenor Andrew Staples, who was moving from solo roles at the front, and to the singing quartet in front of the choire, he managed very well taking care of three roles. His tenor voice is very beautiful, with a great piano and forte, and very many beautiful parts. In the opening of the three part oratorio Gerhild Romberg, alto, was singing extraordinary well.

However, Matthias Goerne, – the world famouse baryton, became the highlight of the evening when he, in the third part entered the front of the orchestra and with remarkable beauty and fantastic well controlled pianissimo presented his long solo part “Jetzt sank des Abends golden Schein”. This became an unforgettable beautiful highlight of the evening.

Daniel Harding´s first season at the head of the Paris Orchestra continues over large projects, like this oratorio composed in 1843 by Robert Schumann. The great rarity of the work. definitely made the evening an event, in addition to let the great orchestra with large choir and sextet, to the vocal soloists. This evening placed on the floor, which functioning better than when the choire has been placed at the balcony. We appreciated the valuable of instrumental clarity, from the introit of the first part, tender Andante inviting the ideally mellow mezzo-soprano of Gerhild Romberger. The breathless tempo break sign the arrival of la Péri –  Christiane Karg. The great tenor Andrew Staples, who joined the Quartet in the heart of the device – Kate Royal (soprano), Gerhild Romberger (alto) and the bass-baritone, Matthias Goerne. The last issue of the first part has remarkably soft strings, the harp of Marie-Pierre Chavaroche. The final is initiated by the robust fugato of the choir, which emerges the purity of the Peri, until the happy “will kommen doreen!” to however inaccessible apotheosis to heroin.  New accompagnato, to Gerhild Romberger this time – superb “Im Waldesgrun am stillen See!. This central episode, yet we salute the amazing funeral “Lullaby” which is well revealed by Christiane Karg.  The musicality of the choir and the small sextet, was excellent. Well prepared by Lionel Sow. 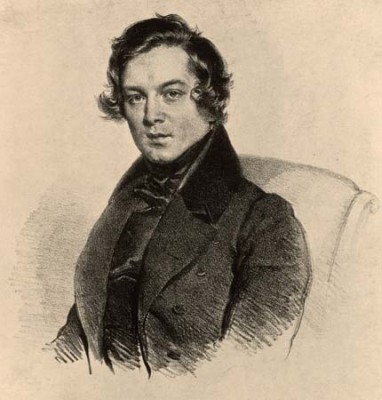 Paradise and the Peri – historic:

Paradise and the Peri, in German Das Paradies und die Peri, is an oratorio for soloists, chorus, and orchestra by Robert Schumann. Completed in 1843, the work was published as Schumann’s Op. 50.

The work is based on a German translation (by Schumann and his friend Emil Flechsig) of a tale from Lalla-Rookh by Thomas Moore. The peri, a creature from Persian mythology, is the focus of the story, having been expelled from Paradise and trying to regain entrance by giving the gift that is most dear to heaven
. Eventually the peri is admitted after bringing a tear from the cheek of a repentant old sinner who has seen a child praying.

Peter Ostwald in his biography Schumann: The Inner Voices of a Musical Genius records that Schumann “confided to a friend that ‘while writing Paradise and the Peri a voice occasionally whispered to me “what you are doing is not done completely in vain,” and that even Richard Wagner praised this work. The cantata is generally held to be a significant achievement by Schumann, and it perhaps appeals less than it might otherwise to modern audiences due to the flowery, Eastern-inspired verbiage of the libretto, which represents a vogue for orientalism that was in full swing in the 19th century but has receded considerably today.

Applaus, seen from the back side, – or went to the balcony. Foto Romuald Sip,

The first English performance took place under difficult conditions at the Hanover Square Rooms in London at the invitation of the Philharmonic Society conducted by William Sterndale Bennett with Jenny Lind taking the leading soprano part.

Paradise and the Peri was the vehicle for Gabrielle Krauss‘s first important appearance, in Vienna in 1858, when she was not yet 16 years old.

– “From Wikipedia, the free encyclopedia”