Semiramide by Rossini in Firenze 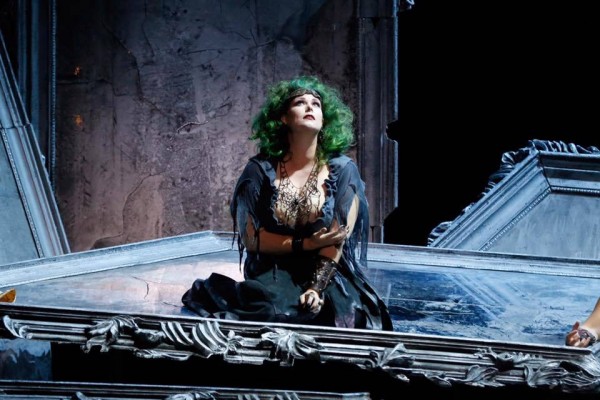 FIRENZE/ITALY: The Rossini-renaissance of the ‘60s of the last century allowed scholars and audiences to shed a new light on masterpieces that were out of standard repertoire or nearly forgotten
. Semiramide, an “opera seria” written by Rossini in the years 1822-1833 and premiered at Teatro La Fenice with Isabella Colbran and Filippo Galli, is perhaps the most shining example.

However the wait is always great for each staging of this very important 19th Century opera, an almost mythical one, which is long, complex, difficult requiring from the singers uncommon both technical and expressive qualities. The extraordinarily beautiful pages follow one another, “serious Rossini”’s unbridled creativity is here at its top.

In Florence this very difficult “Belcanto cathedral” is now staged after too many years: the latest staging was in 1968 and it isn’t appropriate to make comparisons between the current cast and that at the time, with Joan Sutherland in the main role and Richard Bonynge on the podium.

Semiramide is a very problematic opera as it needs four great singers in the main roles and a much more varied and ingenious conducting than Antony Walker‘s, a conductor who does his job with phlegm and few ideas.

He shows a really scarse philological concertation, with cuts and cuts in score, some even distressing.

The main character is Jessica Pratt, (right) one of the most exciting sopranos of her generation.

She approaches the complex character of Semiramide with her lyric soprano voice and her interpretative personality.

Given her vocal characteristics, there is no doubt that she belongs to the Sutherland genre, but conscious of the limits of her voice in the middle and lower register Mrs Pratt whenever possible makes acute “out of ordinance” variants, in fact the upper register is her most interesting one. Unfortunately she proves not to have an overflowing interpretative personality, lacking too often in accent and emphasis (the oath scene sculpted recitatives were bordering on catatonia) and even in her most convincing passages sometimes there is something generic and not too much personal. However an interesting interpretation, strongly applauded by the Florentine audience.

The Spanish mezzo Silvia Tro Santafe in the dreaded en travesti role of Arsace shows an interesting and well educated voice, although lacking a little in incisivity in the phrasing and a little monotonous in the colours. We should note that in this edition staged by Ronconi, and born for the Teatro San Carlo in Naples in 2011 with the same mezzo, the almost adolescent figure of Mrs Tro Santafe takes in this morbid story something of further morbid, almost as Arsaces is a Semiramide’s toy-boy in a scene also almost carnally touched by the Queen (of course they not yet know that are mother and son).

Assur is Mirco Palazzi, whose voice seems a bit too light for his vocal line
. He shows a good voice, elegance in singing and good intentions, although lacking in incisive trembling accents when the scenic and dramatic situation would require them. 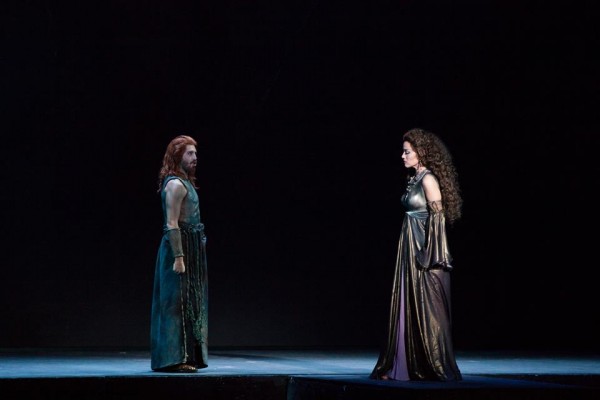 In the terrible role of Idreno the tenor Juan Francisco Gatell is a quite positive surprise. He sings both his arias, sometimes giving the impression to force the voice, and apart from some imprecision he emerges unscathed from this very difficult role.

Oleg Tsybulko was Oroe (in this production turned into a kind of chalky-looking stylite) overall showing a pretty blurred and disappointing vocale line for his rather important role.

The other singers were on an average level.

This Florentine production that we are reviewing is a revival of the staging that the director Luca Ronconi prepared in 2011 for the Teatro San Carlo in Naples, a production now hosted in Florence as a tribute to the great Italian director who died last year. This production is now staged again by Marina Bianchi and Marie Lambert.

Everyone knows that director Ronconi’s last years ideas are notoriously less interesting than the previous decades. In this Semiramide the stage director’s ideas seem to be almost withered, everything seems to be “à la maniere de Ronconi,” only a repetition of seen so many times “modules”, mirrors, columns, frames, carts, supernumeraries that emerge from the stage floor (clear quotation of Ricciardo and Zoraide staged in Pesaro in 1990), everything not vivified by ideas worthy of the name. The story takes place in an undefined time, with the supernumeraries that replace on stage the choir almost always still as timeless classics reliefs, almost a Classicism as a foissilized Oedipus Rex avant la lettre. No frills and exotic trinkets, the terrible story of death unfolds just between the characters and their psychologies, even if their acting does not seem carefully prepared by a unifying hand.

Overall a didactic and not too interesting staging, devoid of real ideas, even if the greatest criticism I would to make is to deploy the chorus in the orchestra pit instead of on the stage.

The costumes by Emanuel Ungaro were good, almost non-existent but functionnal the scenes by Tiziano Santi.

Orchestra of the Maggio Musicale Florentine

The Orchestra of the Maggio Musicale Fiorentino was quite good so as the Choir, unfortunately the audience wasn’t particularly large but warm in applause with all the interpreters.