SHOSTAKOVICH Symphonies with Boreyko at CD

By Fabio Bardelli on 1/28/13 • Categorized as Classical music,Music CD's 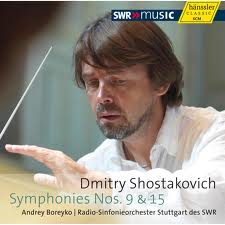 Almost thirthy years separate these two Dmitry Shostakovich’s Symphonies. Symphony nr
. 9 was written in 1945 and premiered that same year in Leningrad under Evgenij Mravinskij. Symphony nr. 15 is the composer’s last one; he worked on it in 1971 and its first performance was in Moscow in 1972, the conductor was Shostakovich‘s son Maxim.

In spite of being so far apart the one from the other in terms of years, these two compositions have probably something in common, and maybe Andrey Boreyko has put them together on this CD because both have a rather serene spirit, almost carefree in the nr. 9. Also in the nr.15 we recognize surely the typical Shostakovich style, but as if gone through a filter of serenity if not unconcern, and even the quotations from other composers seem part of an enigmating puzzling game
.

Elusiveness is also the main characteristic of this last symphony, even if we find in it also a meditation about death. This was due to important health problems that Shostakovich had in 1971, feeling near to die. But in the whole he keeps a distant point of view, with his usual sarcasm, as in the Rossini’s quotation in the first movement. So we can say that this Symphony’s characteristic is a curious mix of foreseable depht and unexpected lightness, together with irony and sarcasm, not forgetting the usual instrumental refinement

These two symphonies are probably rather astonishing
. In fact, nr. 9 was hardly criticized by Soviet regime that wanted a solemn and triumphant music to celebrate victory in World War 2nd
. At the contrary, we face a work openly inspirited to 1700s, light-hearted and witty, Mozart or Haydn-like, instead of a Shostakovich’s “Chorale” (similar to Beethoven’s Ninth Symphony), a page so far from a celebrative purpose, that it was judged lacking in respect towards the fallen in war.

Conductor Andrey Boreyko is Russian by birth and musical training, and he is quite at ease with Shostakovich‘s music as a fish in water: both are born in Leningrad, probably both breathed its mood, or probably there is something in the fact of being born in the same place, that makes natural and believable the energy and rhythm of these pages.

Probably it would have been important to take more care of the orchestra in the slow tempos, but Radio-Symphonieorchester Stuttgart des SWR, is a very flexible and skilled orchestra, and the musicians follow the conductor with energy and show to be very comunicative. The orchestra shows nice and refined colours, the pace chosen by the conductor is really enthralling, and the first parts of each instrumental section, hardly engaged by Shostakovich‘s writing, are really good.

The technical level of this Hänssler Classic CD is very good, as well as the introductory material.