By Henning Høholt on 1/08/17 • Categorized as Musical,Opera,Theatre

VILNIUS/LITHUANIA: The Lithuanian National Opera is again presenting its 2012/13 production of Johan Strauss d.y.´s  most famouse operetta “Die Fledermaus”, which in Lithuanian language has the name “ŠIKŠNOSPARNIS”, with special accents on the two first S´s. It has been a very good production, with lot of beautiful song, both from soloists and from the 38 members choire, very good costumes, an interesting scenographic idea, renewing it in a good way. 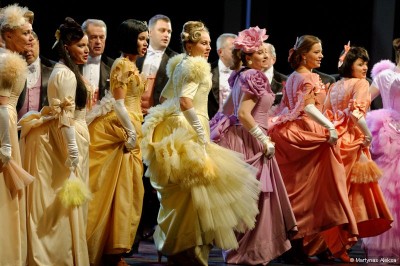 Members of the choire in costumes in deliciouse colours, by Agné Kuzmickaité. Archie Photo from 2013: Martynas Aleksa.

Viktoria Miskunaité was outstanding singing all her wonderful parts as Rosalinde, she has a beautiful voice, she was too wearing the most elegant female dresses on stage, specially the first act one, that costume we appreciated.

In fact the last acts black costume as the hungarian countess, could have been developed with more glamorous shining stones, as her dress disappeared a bit on stage in the light used for her grande Czardaz, which is one of the musically highlight of the production.

The Du, und Du choirepart in the second act was the highlight of the whole performance. Wonderful
.

Gupta Gelgore was the vimpsy Adele, with great coloratura, as she even got shown extraordinary already in the beginning, a very good choice for this role
.  Edmundas Seilius was Alfredo, the “secret” tenor lover of Rosalinde, in amusing outfits, specially his golden shorts, matching well von Eisensteins morning coat, by these costume ideas and the staging Alfredo became a more funny, but still well singing characters, than I am used to, he managed well. 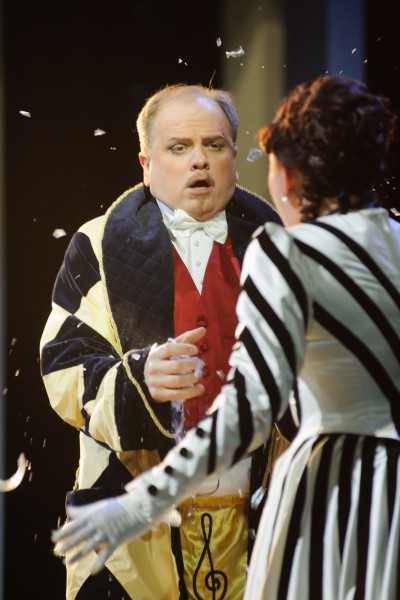 ED to be ‘a natural part of aging’. In contrast, far fewerof agents that directly relax corporal smooth muscle such How to get viagra.

The well singing Sarunas Sapalas played and sung very well the role as Dr. Falke, who is the one, “running” all the comedy.  Rafailas Karpis was (as usual) excellent, this time a advocate Blind, who is not blind at all. Inez Linaburgyté has again the central glamorous role as Prince Orlofsky. As Egidijus Dauskurdis functioned well and with charm as director Frank at the prison. Well formed. Julia Karaliúnaité was Ida, the sister of Adele.

Darius Gumauskas formed the role as the prison attendant well
. This role is special, and very demanding speaking role, as he is opening and use to be entertaining all the audience, with a lot of histories, and I am sure that he did it well, as the audience was laughing and having a very good time. 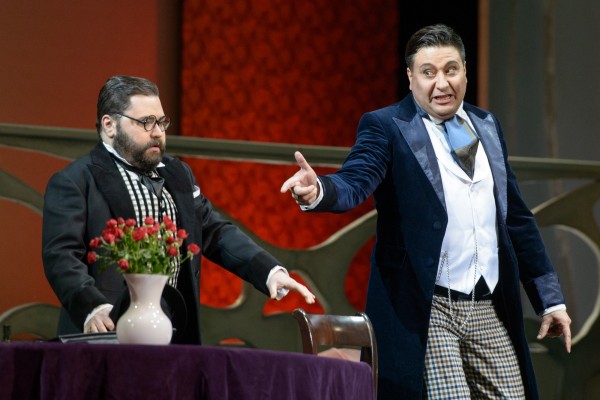 However, for the international audience, they didn´t get much out of this spoken fun. As – the theatre has remarkable, as usual, texted all the singing in Lithuanian and translated to English, that we very much appreciated, but then with so much spoken dialogue, which was telling the funny story, this was not translated, so if you don´t know the history from before or have had time to read the synopsis, then you don´t understand the dialogue, and in that is the whole background for the history, still some is being repeated in the song texts. – For a capital of a country, which is being more and more popular among tourists, this must not be forgotten. Text it all. Then also the foreign visitors can understand what is going on, or at least some of it.

The Orchestra sounded brilliantly, the ouverture was a musically masterwork. Conductor of all the “show! Julius Geniuses,

did a good job. New for me was that they have put a modern pianist on stage, well played by Felids Zakrevskij, this helped a lot, as this production has a lot of talk in the second act, but with his music as background, it made that it was not being dead, and they had even put in a great solo piano number for him.

Costumes by Agné Kuzmikaité, great details who for some of the singers were extraordinary successfully – Rosalind’s first act dress outstanding. The big choir with 19 female dresses, all in different colours, looked good. Scenography by Andu Dumitrescu, who also was responsible for the light
. has tried to give it an Art Nouveau style, and using the turning stage quite well. The regi by Gediminas Sedulous is now working well. For me too much dialogue, that could have been cut a bit. 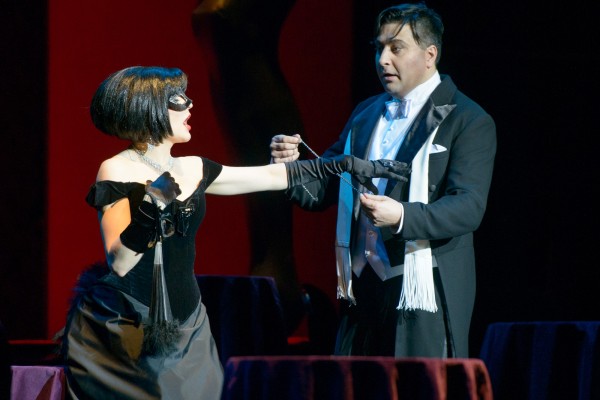 For me, the other Johan Strauss d.y. operetta Wienna Blood at the Lithuanian National Opera repertoire, is still the best operetta in the Vilnius repertoire, and that is specially due to the scenographic solution and to the extraordinary good participation of the ballet.

Please also enjoy our review from the premiere, where we attended second cast 3. January 2013 at: http://www.kulturkompasset.com/2013/01/04/siksnosparnis-die-fledermaus-in-vilnius/