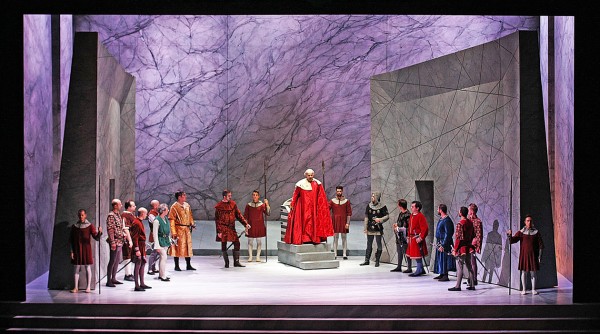 PISA/ITALY: The final version of Simon Boccanegra, a Verdi opera of extraordinary fascination, is bound to Arrigo Boito: actually he was the author of important interventions on the original libretto by Francesco Maria Piave, even if more essential were the changes made by the composer to the score, under the influence of an almost expressive urgence as if Verdi were just waiting for the right opportunity to revise a work written more than twenty years before. It took about two months to review this opera that had so little success in his first draft in 1857 and that was premiered again in its definitive version in Milan in 1881. 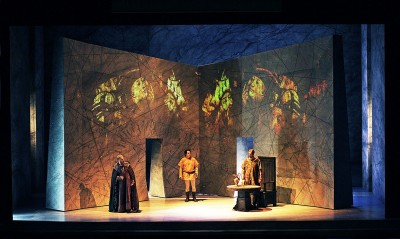 The first version had its premiere in Venice and not many performances over the years in Italian houses reaching a fairly lukewarm success of public and critics.

Even Giuseppe Verdi was strict with himself writing in a letter to Giulio Ricordi in 1875 referring to Boccanegra “… the work is sad, and monotonous as effect.”

The blame fell squarely on Piave’s libretto later modified by Arrigo Boito, who had by then fallen now Verdi’s good graces and that a few years later would collaborate with him on Otello.

The second and definitive version had a mixed success in Italy, while more frequent were its performances in Germanic countries, until this opera was completely recognized as one of the most important of Verdi’s entire stylistic course starting from the historic Milan Scala edition conducted by Claudio Abbado in 1971. 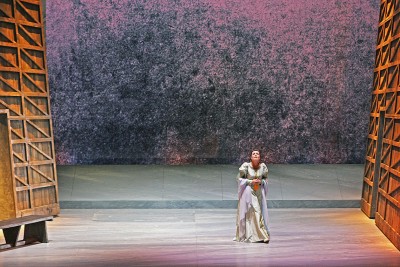 The fact that this opera is essentially for male dark voices is evident even at first listening: Simone and Fiesco are respectively baritone and bass, as the chorus, while soprano and tenor are dramaturgically less important, although their parts are musically beautiful. An other thing that can’t pass unnoticed is the continuous presence of the sea, constantly suggested by the ruffling of the orchestra, the flickering of strings and the colors of the violins: it seems almost to breathe the sea breeze, seldom in an opera the looming presence of the sea is so effectively dashed. 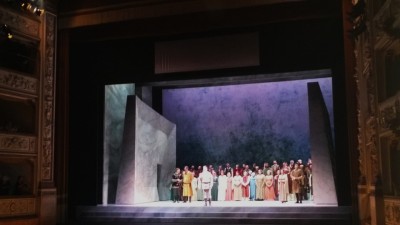 The performance of Simon Boccanegra that we are reviewing (staged on October 10th, the exact day of Verdi’s birthday who was born in 1813) retains the original setting, recreated by traditional costumes by Massimo Poli more that by sober, minimalist, almost abstract, surely essential by Emanuele Sinisi.

The staging by Lorenzo Maria Mucci is undertoned and on the edge of passing unnoticed. The director seems simply to follow more or less the libretto: there is not a single idea to clarify the complicated implausible plot, not an interesting moment to remember, and the singers’ acting came for sure by their experience on stage rather than by directorial choices. Moreover the crowd scenes were resolved in too much intimacy, whereas some tens of extra people on stage would be hoped. 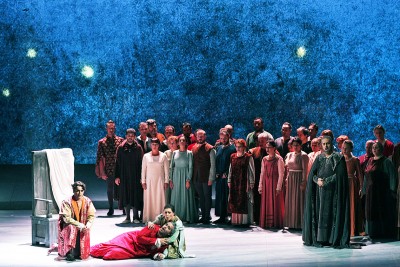 Conductor Ivo Lipanovic supports the singers, not showing great fancy or capability in deepening, but  copes with a speed narrative pace in despite of some vagueness among stage and orchestra.

Sometimes his pace is too metronomic, and the ensembles should have been better characterized, showing a certain improvisation like they were scarcely meditated. The concertation gives the impression of a “dress rehearsal” performance, as if there would various things to be refined.

The main character was baritone Elia Fabbian who shows a rather homogeneous and interesting voice but sings in an anonymous although essentially correct way, apart from some difficulties in intonation. When his character shows his claws Fabbian often does so in a somewhat troubled way, tries just some refinements to put in evidence his fatherly side, but a jagged and complex character as Simone appears at this stage of his career a bit too heavy for the still young baritone.

Veteran Roberto Scandiuzzi gives voice and interpretative streight to Jacopo Fiesco singing with his usual class and interpretative accuracy, although his voice compared to his golden years seems to have lost a bit of shine and security of intonation. However, the character of Fiesco is focused very well and quite reliably, and Scandiuzzi is particularly effective and exciting in the sublime Third act.

Soprano Valeria Sepe in the difficult role of Amelia shows a rather uneven voice, with too little legato and tends to force in upper register, so that some strained notes appear unpleasant. Her character isn’t very full-rounded and the singer is rather uneven during the opera.

Scenically the soprano creates a character that fits perfectly to the youthful figure of tenor Leonardo Caimi who vocally shows a certain vagueness and lacks in refinements, moreover has avoidable problems of intonation. He shows a good voice and sings in a generous and sympathetic way, for example in Sento avvampar nell’anima and Cielo pietoso rendila, both sung with participation and effectiveness, albeit with some difficulties in the upper notes.

Gabriele Ribis was vocally and interpretatively a rather problematic Paolo Albiani, a role that is the motor of the plot and that isn’t even vocally negligible at all.
On a midlevel were the other minor interpreters. The audience that filled the Teatro Verdi in Pisa was very warm in applause with all the interpreters.