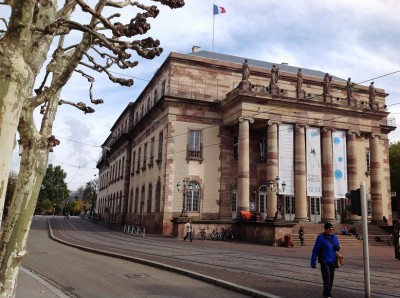 STRASBOURG/FRANCE: The wonderful operahouse in Strassbourg, who is also playing in Colmar and Mulhouse, all close up to the boarder of Germany, is for the spring 2014 presenting a new production of The Flying Dutchmann with 7 performances from the 26th of January (26+28, and 1+3+8 Februar). Moving it to Mulhouse end of February (20+22).  Marko Letonja is conducting, staged by Nicolas Brieger, and as The Dutchmann will sing Sebastian Holecek

Lyrical drama in 3 acts , Libretto by the composer

Ernest Chausson attended the creation of Parsifal in Bayreuth in 1882. It proved to be a great shock for him. From then on, his own production was influenced by the discovery of the Wagnerian language, which he made his own by adapting it to match his sensitivity – and the sensitivity of the French public – through works where the orchestration is virtually impressionistic.

Furthermore, this particular work did not come easily, since he took about ten years (1886-1895) to fine-tune the score of Le Roi Arthus, and his early death in a bike accident prevented him from ever seeing it performed on stage. Yet, let it be clear: despite a certain parallelism, Le Roi Arthus is anything but a pale copy of Tristan. For his first and last opera, Chausson is already speaking in the first person and opening the way for Debussy and Dukas, for example, who in their own way would also strive against the naturalist movement which prevailed at the time.

Amédée-Ernest Chausson; (20 January 1855 – 10 June 1899) was a French romantic composer who died just as his career was beginning to flourish.

Double Bill with the opera studio.

An interesing new prodution of a Double Bill made by the Opera Studio, will be one of the other interesting high lights of the spring two operas by French composer, Charles Gounod La Colombe and by Darius Milhaud Le Pauvre Matelot:

A lament in 3 acts
Words by Jean Cocteau

Too poor to offer a good dinner to the young girl he loves, Horace has no other choice than to cook the dove he has nurtured with such care – a beautiful dove that the young girl would like Horace to give her… Gounod brings to the fore music full of joy and smiles, worthy of the minor farce which is about to be played out.
This misunderstanding is an echo of the plot of the Poor Sailor, a gem stemming from the collaboration between Milhaud and Cocteau. The work starts with the story of Ulysses and Penelope, but ends less happily for the sailor. He has been absent for so long, he is now believed to be dead. His wife alone refuses to accept this belief and constantly puts off any idea of remarrying. Yet when her sailor husband returns, she doesn’t recognise him and kills him to steal the riches he has picked up over his travels. The money will come in very handy when her husband returns, she thinks!

But during all that we get another famouse French composer;

Before Rameau composed Platée (Plataea), humour had rarely been placed at the heart of lyrical scenes, which necessarily put the spotlight on noble, valorous heroes whose destinies were way above the common lot. Here, the genius composer reverses all the codes, putting on stage a pretentious frog who thinks it has succeeded in touching the heart of the greatest of gods, Jupiter

recognizes the value of altering modifiable risk factors viagra may achieve the goal of increasing arterial inflow and.

. Rameau goes far beyond the confines of entertainment, and while our frog’s impudence is painfully punished in a cruel ending, this could well reflect the composer’s desire to highlight the violence imposed by the most powerful in our world upon the most destitute. A fable we would today term as “unhinged”, where Rameau puts his all into creating the most inventive, colourful, virtuoso music. And yet, despite the apparent delirium (after all, Folly herself is one of the characters!), an acerbic criticism of mid 18th-century society strikes through.

PRODUCTIONS OF THE OPÉRA STUDIO

This total opera program is giving many reasons to vist Opera National du Rhin this Spring.