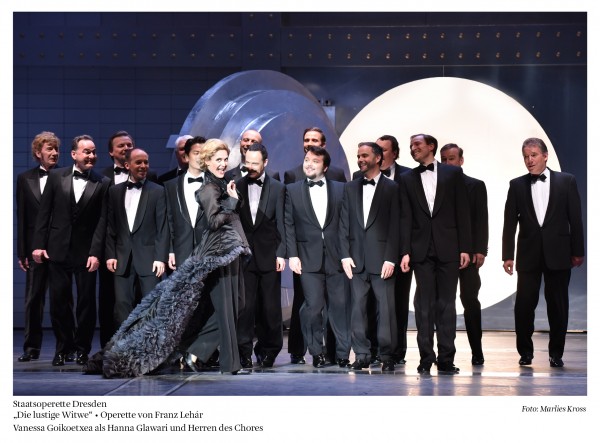 DRESDEN/GERMANY: October 2nd 1947: Dresden’s city center laid in ruins, as well as all its theatres. The entrepreneur Fritz Randow rented a ballroom around 5 miles from the destroyed city center, invested his private money, and reused whatever he could reuse from the destroyed Centraltheater to create a new stage. Nevertheless the money was not enough for the ambitious project. When the “Apollo-Theater” was opened, the Socialist city government already had kicked him off the project. The first piece on stage was Franz Lehár’s “Die lustige Witwe”.

“Die lustige Witwe” -(The merry widow), a not at all socialist plot of an Austro-Hungarian dandy in the decadent Paris of the 1900s who should marry a rich widow to safe the money for a bankrupt Balkan state
. In 1947 it even might have been in mind of the premiere audience that Lehár’s operetta about money which makes the world go round was the favorite play of Adolf Hitler.

This performance was the beginning of the later Staatsoperette Dresden theatre which gathered artists of the former Dresden stages dedicated to operetta and light opera. And the provisory of the theatre lasted decades. In 2003 there was a real danger for the now city owned theatre to be closed, but Intendant Schaller and the ensemble contributed (and still do so) 8 percent of their income to the building of a new theatre in Dresden’s city center. At the end 12 million Euro of 96 Million of the new Kraftwerk Mitte performing art center which includes also the Theater Junge Generation will have been financed by the Staatsoperette staff.

70 years later, the Staatsoperette Dresden celebrates its 70th birthday with a reloaded merry widow who owned millions just by heritage. Millions which for some seem so easy to get, for others unreachable, for some might even be a burden, for others freedom to live a joyful life. 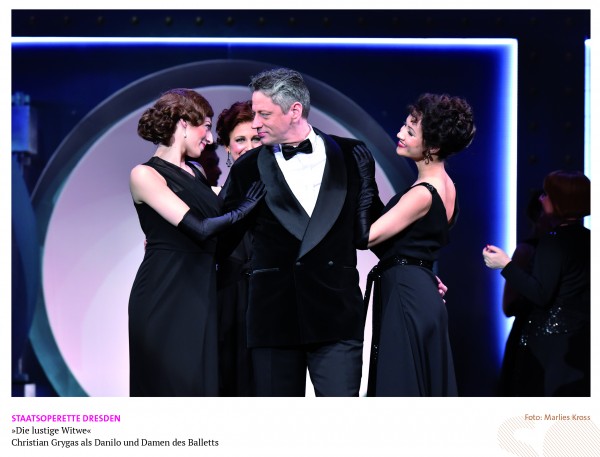 No wonder that the producer Sebastian Ritschel choose as setting a metallic grey armed treasury, created by Christof Cremer.

The idea of Ritschel who in the meantime has become opera director of the nearby Landesbühnen Sachsen in Radebeul might be convincing, but in the first and Second act it didn’t really fit to the action. In the third act, a huge illuminated show staircase finally could bring the decadent spirit of the “Maxim” nightclub into the Staatsoperette stage. Cremer’s costumes instead were full of elegance. 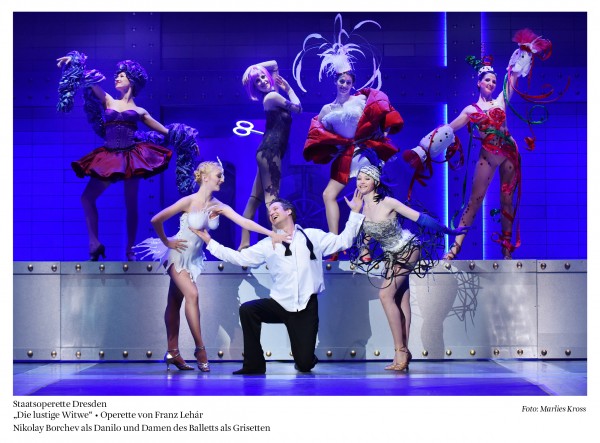 From the merry widow in Dresden Staatsoperette, in the center Nikolay Birches as Count Danilo,

The list of protagonists is long in the Merry Widow, too long to mention all singers even if all of them sung and acted in a high quality – even for international standards. And the Staatsoperette in the new building with its 800 seats aims for international guests as well, by projecting English translation of the texts on a screen or giving a resume in the program booklet
. Nevertheless Vanessa Goikoetxea as Hanna Glawari has to be named. The Spanish-American Soprano who actually lives in Dresden interpreted the Glawari as an elegant and joyful, but also very thoughtful and not really happy widow. With her nice accent in her dialogues and her light timbre she was the star of the evening, accompanied at eye level by Christian Grygas as Danilo. The baritone is a member of the Staatsoperette since 2005 and plays also this role with obvious freshness and depth. Almost tenoral in his heights and warm in the deep parts he justified the grand applauses by his faithful audience. Also Jannik Harneit (Njegus), Julia Danz (Valencienne), Markus Francke (Rosillon), the choir and especially the acrobatic corps de ballet who even was able to sing, should be mentioned. The orchestra of the Staatsoperette and its (vice) musical director Christian Garbosnik rounded off the experience of a great evening full of sentiments and richness. Maybe this evening the illusion of the pursuit of happiness by money lasted even for a while…