By Henning Høholt on 7/30/16 • Categorized as Art's,Design,Festival,Movies,Theatre,Tourism 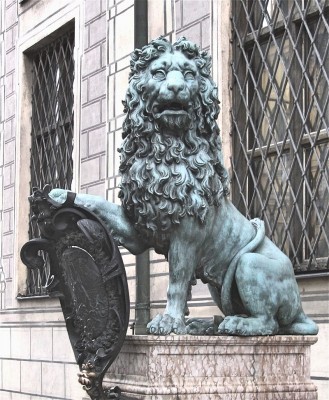 The Lion by the entrance port to the Residence in Munich, foto Tomas Bagackas

MUNICH/GERMANY: As the closest neighboor to Bayerisches Staatsoper in Munich, and with the Hof Garden at the other side, The Residence i situated.

A large Residence for the former Royal family in Bavaria.

Who Germany has managed to build up again after large bombing during the 2. World War.

Königsbau, one of the three main parts of the Münchner Residenz, seen from the Max-Josephs Platz side where the entrance to Bayerisches Staatsoper is to the right (out of the picture).

The Munich Residenz (Münchner Residenz, Munich Residence) is the former royal palace of the Bavarian monarchs of the House of Wittelsbach in the centre of the city of Munich, Germany. The Residenz is the largest city palace in Germany and is today open to visitors for its architecture, room decorations, and displays from the former royal collections. 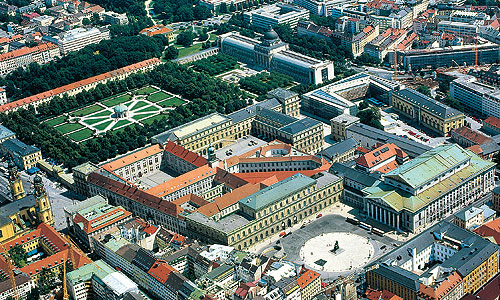 Air picture, in the middle to the very right a part of the entrance to the famouse Bayerisches Staatsoper. Behind left the Hof Garden. Foto from Bayerischess Schloss department.

The Munich Residence served as the seat of government and residence of the Bavarian dukes, electors and kings from 1508 to 1918. What began in 1385 as a castle in the north-eastern corner of the city (the Neuveste, or new citadel), was transformed by the rulers over the centuries into a magnificent palace, its buildings and gardens extending further and further into the town. 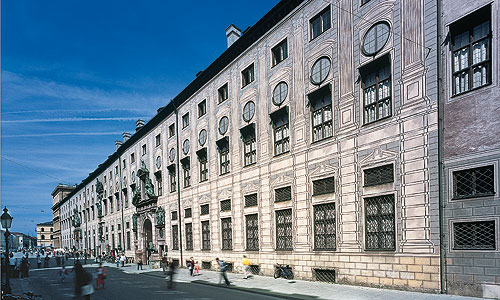 Fasade, Alte Residenz (Old Residenz; towards the Residenzstraße), with the above shown Lion by the entrance port.

The rooms and art collections spanning a period that begins with the Renaissance, and extends via the early Baroque and Rococo epochs to Neoclassicism, bear witness to the discriminating taste and the political ambition of the Wittelsbach dynasty. 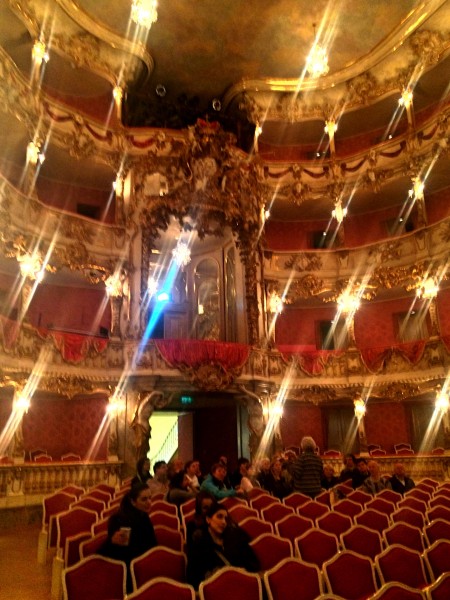 Much of the Residence was destroyed during the Second World War, and from 1945 it was gradually reconstructed. Today, with the museums of the Bavarian Palace Department, the Residence Museum itself, the Treasury and the

Cuvilliés Theatre along with other cultural institutions, this is one of the largest museum complexes in Bavaria.

The complex of buildings contains ten courtyards and displays 130 rooms.

The three main parts are the Königsbau (near the Max-Joseph-Platz), the Alte Residenz (Old Residenz; towards the Residenzstraße) and the Festsaalbau (towards the Hofgarten). 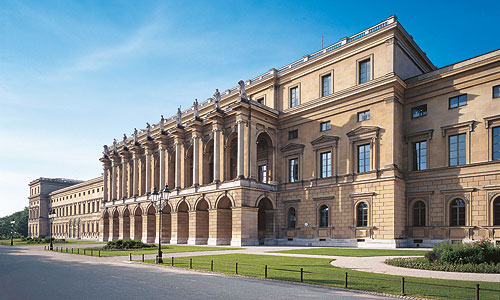 The Festsaalbau (towards the Hofgarten).

A wing of the Festsaalbau contains the Cuvilliés Theatre since the reconstruction of the Residenz after World War II. 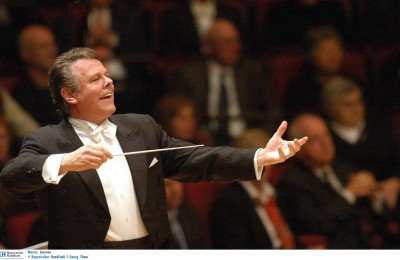 It also houses the Herkulessaal (Hercules Hall), the primary concert venue for the Bavarian Radio Symphony Orchestra – where the famouse Latvian Mariss Jansons is chief conductor.

The Byzantine Court Church of All Saints (Allerheiligen-Hofkirche) at the east side is facing the Marstall, the building for the former Court Riding School and the royal stables. 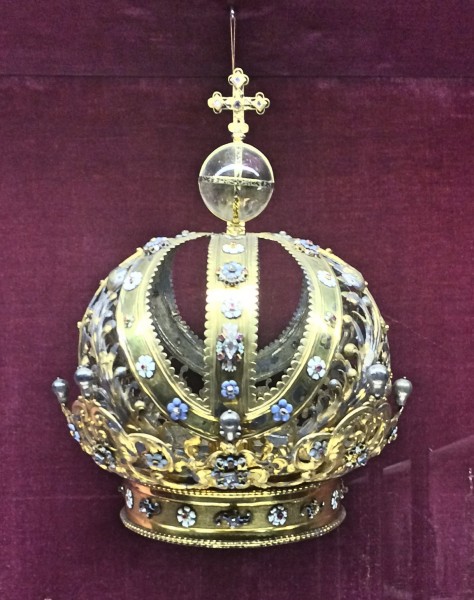 Such a large Museum is not possible to cover in one reportage, therefore we have, in addition to this general information from the official homepage of Bavarian Museum, concentrated on a few special details. 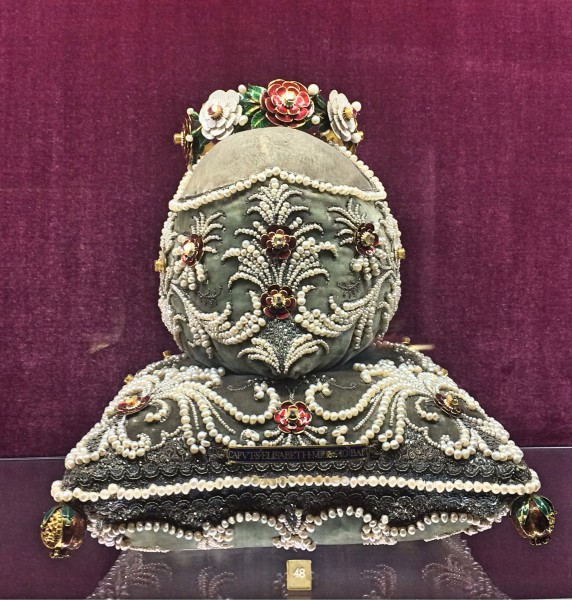 Beautiful Pearl embroidery with porcelain roses,  in the Treasure part of the Residence. Foto Tomas Bagackas

The private chapel. The hall with the splendid large tapestry wall hangings, with interesting detailed seasons motives, telling how the life could have been Centuries ago.

In addition to the large church in Residence, – The Byzantine Court Church of All Saints (Allerheiligen-Hofkirche). The royal family, of course, has its own small private chapel. 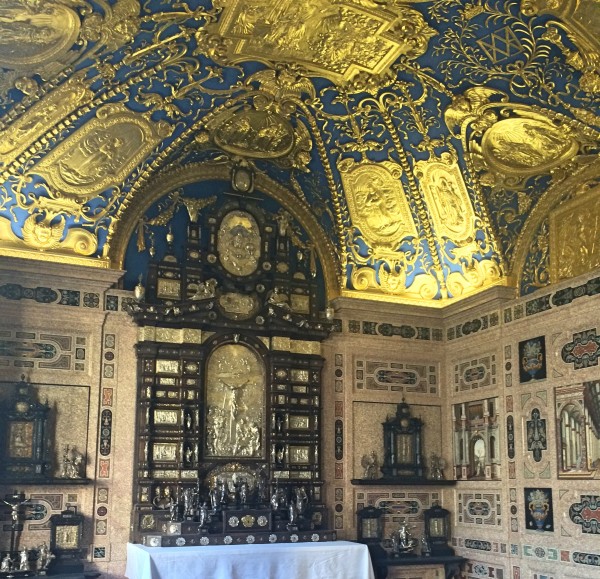 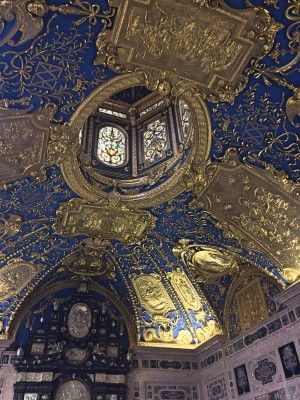 Such tradition was at this periode not situated in a cold bare room. On the contrary, this is a room-layered visual innspirasjon because of the extraordinary good professional craft work as outstanding craftsman has done in efforts chapel decoration, both in terms of floors, walls, ceilings and furnishings. Furthermore detailed gold decorations and mosaic stones.

guanosine monophosphate (cGMP) (15,16) and PDE V is thethe NO stimulus is removed or ceased, cGMP is no longer cheap viagra online.

In one hall we are surrounded by splendid large tapestry wall hangings, with interesting detailed seasons motives, telling how the life could have been Centuries ago.

The tapestryes are in very good condition and it is an experience to get these good impression. 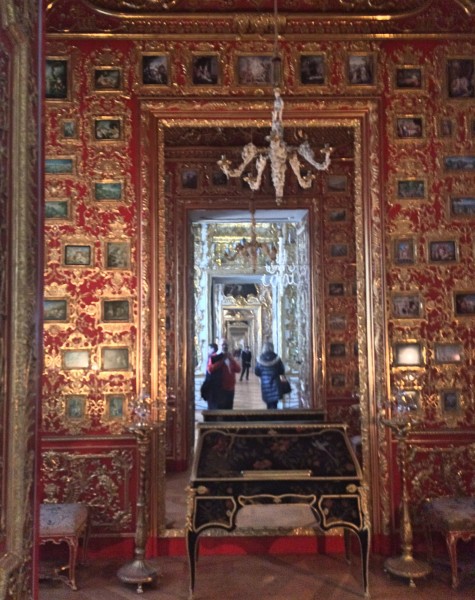 The Residence has long corridors. In one of the rooms as these long corridors passing is there a series of very small painted family portraits. 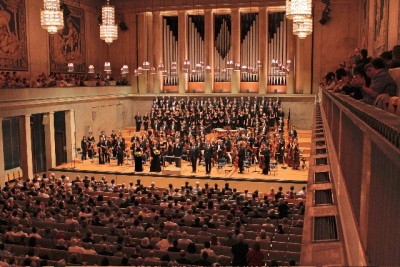 The neo-classical 250 metre long Banqueting Hall Wing (Festsaalbau) in the north section of the Residenz was added between 1832 and 1842 by Klenze under instructions from King Ludwig I. Here were located the Large Throne Room and the royal reception halls. One of the primary concert venues for the Bavarian Radio Symphony Orchestra is the Herkulessaal (Hercules Hall), which has replaced the destroyed Large Throne Room. The Festsaalbau today houses also the Bavarian Academy of Sciences and Humanities and the Cuvilliés Theatre (Old Residenz Theatre). 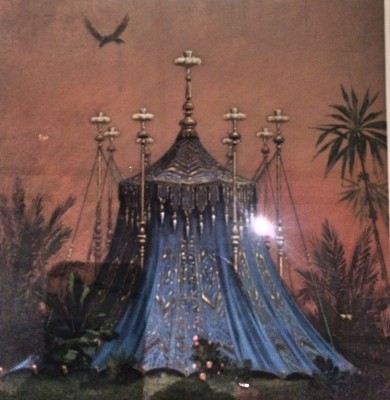 Scetch from a paviljong for the Wintergreen in the residence. Foto Tomas Bagackas

The Winter Garden was commissioned by King Ludwig II of Bavaria (1864-1886) around 1870. After the king’s death, the Winter Garden on the roof of the Festsaalbau of the Residenz Palace was dismantled in 1897.

The reason for this was due to water leaking from the ornamental lake through the ceiling of the rooms below.

Photographs and sketches still record this incredible creation which included a grotto, a Moorish kiosk, an Indian royal tent, an artificially illuminated rainbow and intermittent moonlight. 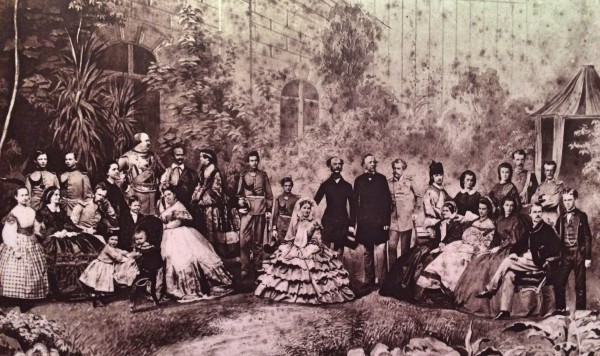 Royal Family, Residence Wintergreen, Foto Tomas Bagackas from a photo in the exposition in the Residence. 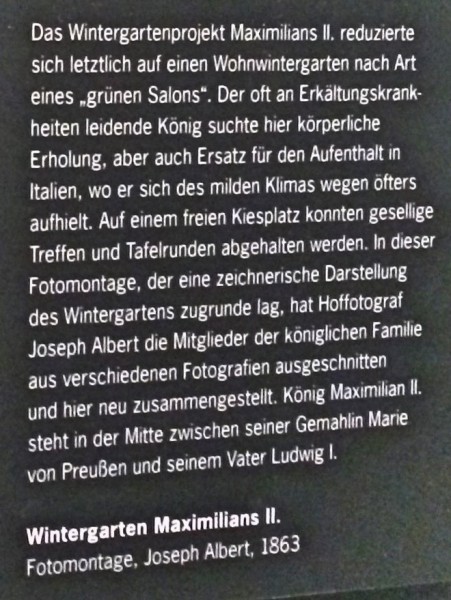 Text to the photo above.

Ten courtyards can be found inside the large complex: The Grotto Courtyard (Grottenhof) with the Perseus Fountain was built between 1581–1586 under William V (1579–1597) by Friedrich Sustris as the leading architect, and takes its name from the grotto on the western façade of the Antiquarium.

The octagonal Brunnenhof (Fountain Courtyard) served as a place for tournaments before the large Wittelsbach Fountain was erected in the middle of the courtyard in 1610. The buildings around the Kaiserhof (Emperor’s Courtyard) with the Residenz Tower as clock tower, were erected from 1612 to 1618, in the reign of Maximilian I. Both courtyards are decorated with optical illusions on the facade, the same as the facade of the Alte Residenz.

The Königsbauhof (King’s Building Courtyard) replaced a garden. At its eastern side the rococo facade of the Grüne Galerie (Green Gallery) is situated, designed by François Cuvilliés the Elder in of 1731–33. 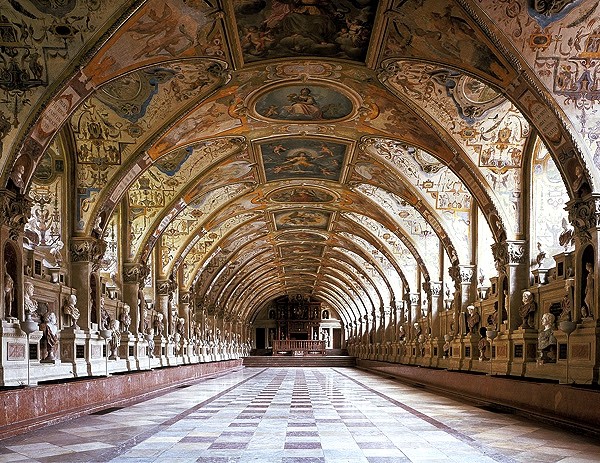