The Rite of Spring at Théâtre des Champs Élysées

By Henning Høholt on 5/16/13 • Categorized as Uncategorized 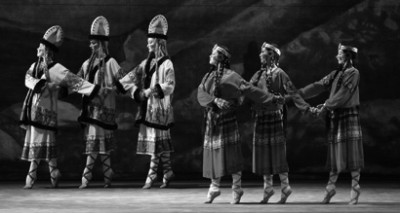 The Rite of spring with the Mariinsky Ballet, Saint Petersburg
. In Paris.

PARIS: World wide, Théâtre des Champs Élysées has the renomé as one of the most interesting classical music, opera, ballet and theatre houses in Europe. 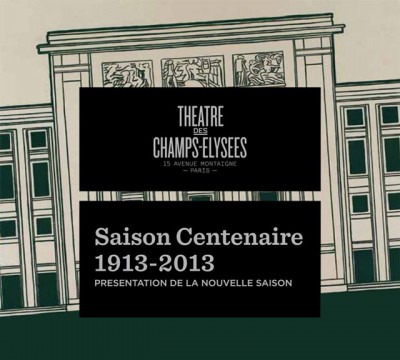 Through its season it presents a large variety of performances and productions, guesting and own productions, coproductions. Classical Symphonic concerts, chamber music, recitals, opera, ballet
.

At Théâtre des Champs Élysées the audience can meet “all” the worlds leading names in the mentioned fields, in a generouse combination with “all” the leading French names.

This makes it a great pleasure to study and to follow this theatre much closer.

Théâtre des Champs Élysées is this year celebrating its 100 years Jubilee. The programme for the jubilee is at the highets qaulity, variety and musicality.

One of the highlights in the 100 years jubilee of Theatre des Champs Elysees in Paris, many very interesting projects are being presented. One of the hits is the guesting of the world famouse Ballet of the Mariinsky Theatre, directed by Valery Gergiev.

Through its international contacts the theatre has succeeded in presenting not only a recreation of the “original” version from 1913 as it is now being presented at the Marinsky Theatre in Saint Petersburg.

Furthermore it will be presented in the Sasha Waltz 2013 production. It will be a historically extraordinary event. Who will be broadcasted live on ARTE directly from the representation May 29, 2013.

Valery Gergiev conductor, Ballet and Orchestra of the Mariinsky Theatre

The Rite of Spring (French: Le Sacre du printemps, Russian: «Весна священная», Vesna svyashchennaya) is a ballet and orchestral concert work by the Russian composer Igor Stravinsky. It was written for the 1913 Paris season of Sergei Diaghilev s Ballets Russes company, with choreography by Vaslav Nijinsky and stage designs and costumes by Nicholas Roerich. When the ballet was first performed, at the Theâtre des Champs Elysees on 29 May 1913, the avant-garde nature of the music and choreography caused a near-riot in the audience. Although designed as a work for the stage, with specific passages accompanying characters and action, the music achieved growing success as a concert piece and later became recognised as one of the most influential musical works of the 20th century. It is widely performed in the concert hall, and is frequently revived on the stage.

Stravinsky was a young, virtually unknown composer when Diaghilev recruited him to create works for the Ballets Russes. The Rite was the third such project, after the acclaimed The Firebird (1910) and Petrushka (1911). The concept behind The Rite, developed by Roerich from Stravinsky’s outline idea, is suggested by its subtitle, “Pictures of Pagan Russia in Two Parts”; in the scenario, after various primitive rituals celebrating the advent of spring, a young girl is chosen as a sacrificial victim and dances herself to death. After a mixed critical reception for its original run and a short London tour, the ballet was unperformed until the 1920s, when a version choreographed by Leonide Massine replaced Nijinsky’s original. Massine’s was the forerunner of many innovative productions directed by the world’s leading ballet-masters, which gained the work worldwide acceptance. In the 1980s, Nijinsky’s original choreography, long believed lost, was reconstructed by the Joffrey Ballet in Los Angeles.

Stravinsky’s score contains many features that were novel for its time, including experiments in tonality, metre, rhythm, stress and dissonance. Analysts have noted in the score a significant grounding in Russian folk music, a relationship which Stravinsky tended to deny. The music has influenced many of the 20th century’s leading composers and is one of the most recorded works in the classical repertoire.

The original Rite of Spring ran for only nine shows, three of them in London. Nijinsky’s sudden marriage to Romola, a dancer in the company, finally drew a line under the toxic love affair with Diaghilev, who summarily sacked him, forbidding any further performances of his choreography. Thus the steps for Rite were forgotten, while its music went on to become a concert-hall staple.

But, as we have seen around in the ballet world since, adventuresome choreographers have between them turned out approximately another 160 versions, according to different statitisics, in styles and formats that span the gamut of Western dance. Among them  Pina Bausch’s 1975 staging, featured in Wim Wenders’ film Pina. Kenneth MacMillan’s 1962 version for the Royal Ballet, now syndicated around the world, evokes the mystical songlines of Australia’s aboriginals
.

Right now, more recent interpretation is presented at Sadler’s Wells, London, as the first one in A String of Rites, presenting three commissions to mark the 100th anniversary. Michael Keegan-Dolan’s version for his company Fabulous Beast is laced with tropes of Irishness – hare-coursing, tea-drinking, smoking.

“Stravinsky, Nijinsky and Roerich were reacting to the things I react to now. Those boys were initiating change, and a lot of us are frightened of change. That fear is in The Rite of Spring: fear of the changing seasons, fear of death of the self. These themes are always relevant.

“Dying is something we’re all going to do, for sure.” 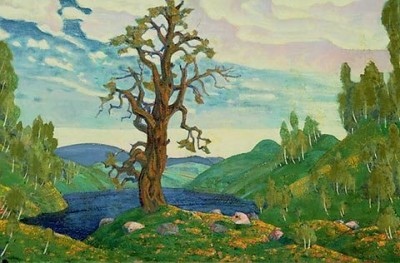 To provide a clear visual impression of Roerich’s innovative designs for this ballet. Roerich’s scenery and costumes were a vital element in Diaghilev’s original production, and this image will assist the reader’s understanding of the ballet’s impact in 1913. There is substantial discussion in the text relating to Roerich’s designs
.

Roerich made many designs for the ballet: for its original 1913 production, the 1920 revival, the 1930 American premiere and the 1948 La Scala production. It does not appear that these any of these designs were published prior to 1923. Roerich’s death in 1947 means that his work will come into the public domain in the US after 2017.