“The Sound of Salvation” in Fredrikstad, Norway

By Torkil Baden on 8/20/17 • Categorized as Musical,Theatre

The Sound of Salvation 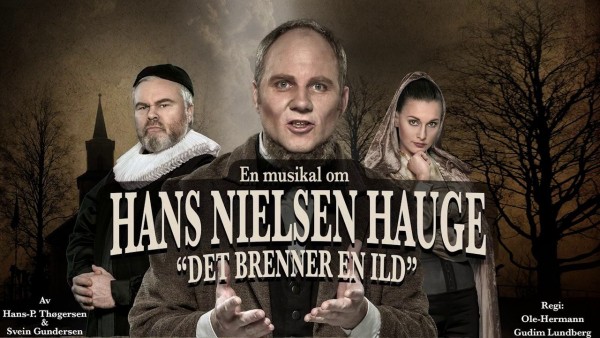 FREDRIKSTAD/NORWAY: The new musical about a religious and industrial pioneer has qualities for a continuos life, also on professional stages. The script and the music create an exciting story, based on important events in Norwegian history.

Church and religious organisations have in forehand embraced this new musical about a martyr and hero. It could have been the other way around. Musicals like Jesus Christ Superstar and Godspell have been denounced as sacrilege by the same forces. But this version has already before its opening reached all the corners of religious life in a very conservative region south of Oslo. Even the bishop participates and gives his blessing.

Classical composer  Egil Hovland (with Ivo Cramer and Britt Hallqvist) wrote an opera about the preacher Hans Nielsen Hauge some twenty years ago. The not succesful production portrayed him as a mighty John the Baptist, but missed an important aspect of his down-to-earth attitude to people and to business. 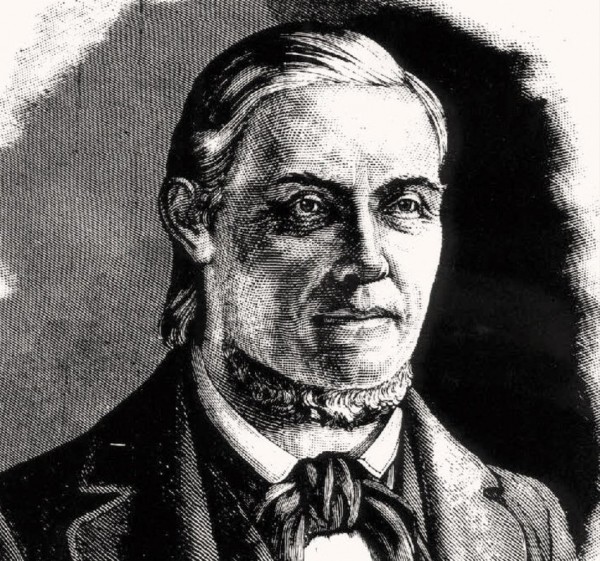 The background is that Hans Nielsen Hauge (1771-1824) had an exctatic experience equivivalent to historic saints. Working in the field in 1796 the farmer’s son was singing to himself a traditional psalm about tasting the unity with Christ (Jesu, din søde Forening at smage).  In a mystical moment he was called to confess his faith for the world and demand conversion.

These were the times when preaching had to be permitted by the church
. He did not care about the monopoly, and ended up in jail several times, accused of fanatism and seduction

. At one point his popular writings were forbidden. 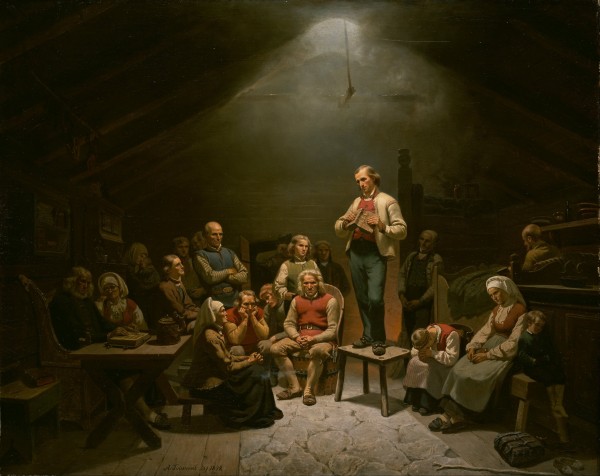 «Haugianerne» by Adolph Tidemand 1848, National Gallery, Oslo. Photo: Wikipedia
The painting is famous for its sacred atmosphere of sincerety and devotion, typical for the followers of the preacher Hans Nielsen Hauge

His preaching challenged to a life where faith combines with practical work and business. He was not  an ascetic pietist, but an industrial pioneer. During the crises of the Napoleonic wars he was taken out of prison for half a year to help with salt factories!

Writer Hans-Petter Thøgersen and composer Svein Gundersen are experienced creators of musical productions. Gundersen has composed some of the most popular pop hits (Har en drøm, Ei hand å holde i) and is a kind of god father in Norwegian pop music through his contributions to recordings and film. His songs now are in a Lloyd Webber/Les Miserables style. Some of the rocking songs and ballads are prolific and catchy, and others are more ordinary and arioso-like, based in the text.

The music flows continuosly, also under most of the spoken parts, but sometimes with too many repetitions. The smooth music and quick stage transitions create pace in the dramaturgy, moving the action forward.

It is a difficult task to portray the Hauge story in a credible way. Too often everything is simply black-and-white with saints and devils in conflict on stage. Parodic priests  attacking the preacher is cheap entertainment, but does not add to a deeper understanding. On the other hand too much pathos can be ridiculous. This production steers clear of these extremes.

This text is not very poetic, but avoids the superficial portraying of the hero and his opponents.  In this musical his rebellion against a hippocritical authority shows stronger than his religious calling. It is more struggle than salvation, and I am not sure that is a true picture. 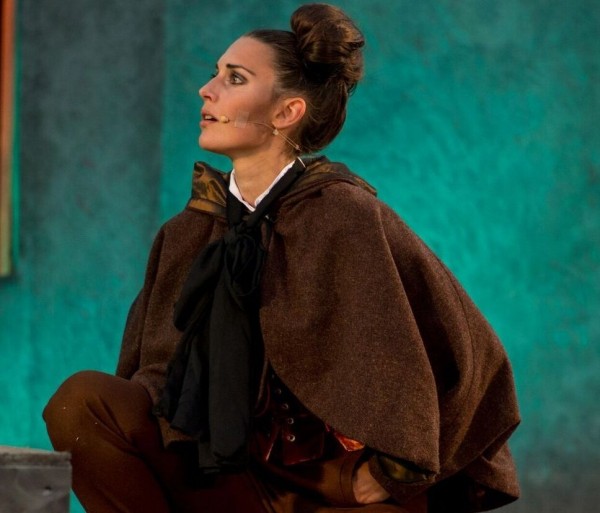 The intriguing plot develops an unpredictabilty in the confrontation between Hauge, his friends and the authorities. His inner thoughts manifest themselves in the invention of a physical figure, The Follower. The clashing of his  doubts and his faith gives a good contrast in the personification. The role is excellent performed by musical star Heidi Ruud Ellingsen, though the score gives her surprisingly little singing. 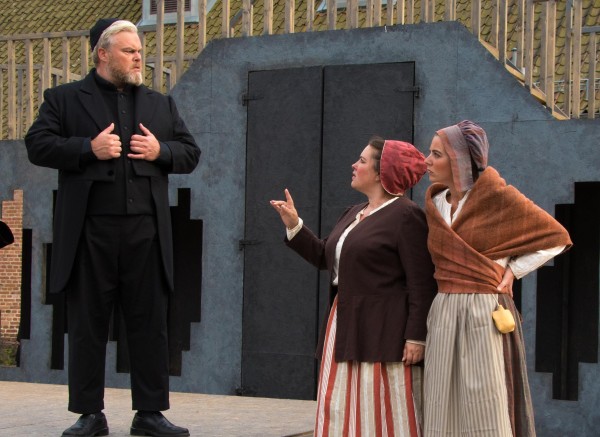 On stage two male veteran Norwegian musical artists have the leading roles. Erik Wenberg Jacobsen in the main role sings his heart out in the ups and downs of the preacher in a first class performance. So also the powerful and imposing Rein Alexander as the priest which fortunately embodies much complexity in defending the church.

The simple platform scenography is effective. The scenic direction gives action, credibility and humour. It allows the cast of around thirtyfive to speak, sing and dance impressively well, followed by a highly professional 7-piece band.

A revised version might have possibilty for a longer and a professional life. The history of christianity in Norway is in great debt to the heritage of Hauge. He started a major revival and had the generosity to be faithful to the institution of church who had attacked him. Today his sober message of faith, diligence and self conciousness might still be a challenge for modern society.

Performed on an outdoor stage in and old fortress the weather does play a role. The opening night became very wet, but the cast and the audience walked on through to an enthusiastic reception.

Local cast of singers, and dancers. 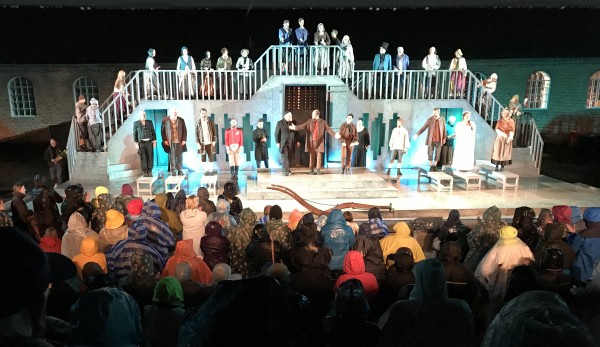