THE TSAR’S BRIDE on CD 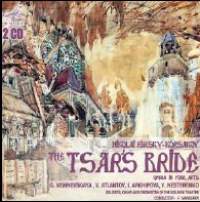 The Melodyia edition of this historical performance of The Tsar’s Bride written by Nikolai Rimsky-Korsakov is a cause for reflections about the music and the performers.

Rimsky-Korsakov composed this opera after turning fifty, after writing operas (May Night, Sadko and others), symphonies and symphonic poems, and a large quantity of chamber music. His musical studies led him to a style that was almost a “synthesis” among Russian tradition and Western influence. Rimsky, also a member of the “Group of Five”, is considered as a “link” among two different cultures and musical worlds. Moreover, he was considered, and still he is, a real expert of technical and expressive possibilities of the orchestra, in short an extraordinary orchestrator: we realize it if we only think to the historic, stylistic and musical importance of his revision and orchestration of other musicians’ compositions, first of all Boris Godunov.

Nevertheless The Tzar’s Bride is a traditional opera in its style, looking more to the past, expecially to Glinka, as if the author wanted to take a nostalgic look on the expressive possibilities of the Romantic period, more than making as a “bridge” to the Russian music of the future, which after him will go on new and different roads.

Tsjaikovskij died in 1893, and Rimsky’s attempts to free Russian music from the excess of nationalism and to make it more European make it a very interesting synthesis for today’s listeners
.

We could say that The Tsar’s Bride is a rather “ambiguous” opera, sometimes almost generic, not really national but not even internationally Romantic: a sort of “middle road”, which theoretically could let unsatisfied both nationalists and those who support Romanticism and European music: maybe this is the right way, or at least one that could perfectly coincile them.

The opera offers a nice and easy listening, even if, apart some of the better known pages sung by Marfa, there is no memorable music in it. It’s more important for Russian than for the Western culture, and it’s actually not well known in the rest of Europe
. I don’t know how often it has been performed in Norway or in Scandinavian Countries, but in Italy its stagings in the last decades have been very few.

For today’s European listener it seems a product of very good craftsmanship, with the he composer focusing on the characters’ psychology more than on theatrical actions as they are described in the complex and sometimes “grand guignol”-style libretto by Lev Mej with its many murders, magic potions and poisons. Great narrative arches, great skill, and many great choral scenes, in an opera that doesn’t sound receptive of the modern influences in the new European music at the end of the nineteenth century.

In this version, the cast gives the impression to indulge in histrionics, with the exception of a single character of which later. In the whole this performance seems based on experience of the singles artists and craftmanships more than on investigation, or the deepening of pages and psychologies.

The exception is surely Galina Vishnevskaya, who creates a trembling but strong characterized Marfa, showing her vocal gifts (this recording was made in 1973), even if not showing the same convinction as other times. However she shows her great natural expressivity and vocal richness in a very important character in musical repertory of her homeland.

Vladimir Atlantov displays a firm but generic tenor voice, and his phrasing is not very imaginative.

As Lyubasha, Irina Arkhipova creates a very well definited character, thanks also to her firm singing. Yevgheny Nesterenko is a generic but effective Sobakin

the time) Almost viagra – a comprehensive sexual, medical and psycho-social.

. All the second leading singers sing rather well and with skill, and they all seem involved in what they sing
.

Russian conductor Fuat Mansurov, not very known in Europe, conducts the Choir and Orchestra of the Bolshoi Theater with precision, reliability, fast pace and clear ideas, knowing the internal musical mechanisms of operas such as this one, with its showy, flashy orchestration (it’s enough to listen how he leads us in medias res with his energy in the Ouverture) but also with his lyricisms and instrumental refinements.

Solid and sure of themselves is the Orchestra and Chorus of Bolshoi Theater, in a repertoire that is very familiar to them
.

Technically the recording is good, but the box unfortunately doesn’t include the libretto.