by Gioachino Rossini in Pesaro, Italy

PESARO/ITALY: Gioachino Rossini was sligthly older than 23 years of age when he wrote Torvaldo e Dorliska, opera premiered in Rome on 1815 December 26th inaugurating with a lukewarm success the so-called “Carnival Season” which at that time opened the day after Christmas, even If it may seem rather weird to us.

The premiere was a few months after Elisabetta Regina d’Inghilterra, but for Torvaldo and Dorliska the composer turned to the librettist Cesare Sterbini, who would write also the libretto of Il Barbiere di Siviglia opera written in a few days that will be staged about two months later. 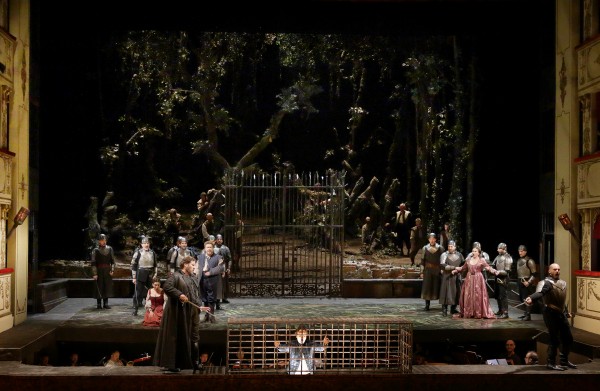 Torvaldo e Dorliska is a “dramma semiserio” whose literary sources have been recognized in the novel Pamela or the virtue rewarded of British writer Samuel Richardson, that already inspired other opera librettos, La Buona Figliuola by Niccolò Piccinni and Lodoiska by Johann Simon Mayer. It recounts the story of the young spouses Torvaldo and Dorliska, whose love was contrasted by the bad guy Duca di Ordow, who even tries to kill the young man. After alternate events, including even a popular uprising against the wicked Duca, the two spouses are finally reunited. In this opera there are also “mezzo-carattere” or even comic characters, such as the castle’s guardian Giorgio, and also Ormondo, whose musical part I will talk later. As said it is a “dramma semiserio”, so the story despite its various characters and interpersonal and political conflicts achieves a happy ending with Torvaldo’s and Dorliska’s happiness.

This opera was almost forgotten until about 40 years ago was revived in 1976 on the occasion of a RAI Radiotelevisione Italiana performance having as conductor Alberto Zedda, with singers as Lella Cuberli, Lucia Valentini Terrani and Enzo Dara (a great italian singer who passed away few days ago). This rare opera presents merits and limitations of a fairly generic “Rossini manner” without any special research on the psychology of rather schematic characters as young lovers whose happiness is prevented by the bad guy fallen in love with the beautiful girl and so on. A somewhat more interesting and faceted character is on the contrary Giorgio, the castle’s guardian, a good and of popular indole man, who will be also in the middle of the peasant revolution that will overthrow the fierce Duca. 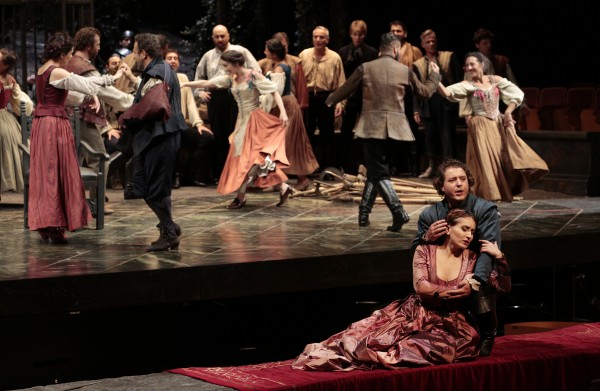 Ensemble with Dmitry Korchak and Salome Licia in front.

Of course the young musician’s happy hand comes out from time to time, as well as in instrumental writing in arias duettos and ensembles. Curious are also the self-quotations as often in Rossini, not only for arias passing offhandedly from an opera to an other but also for musical themes that pass with remarkable nonchalance from one musical page to another.

The young Roman conductor Francesco Lanzillotta is a pleasant surprise with his light and precise pacing and a chromatic orchestral never affected but always very natural research. He is always very attentive to the relationship among orchestra and the singers that director Mario Martone sometimes dislocates in somewhat uncomfortable places, and must be pointed out his absolute naturalness in making sliding and agreeable this rare opera by Rossini.

On the shields the two lower voices, the bass Nicola Alaimo as Duca di Ordow and Carlo Lepore as Giorgio. 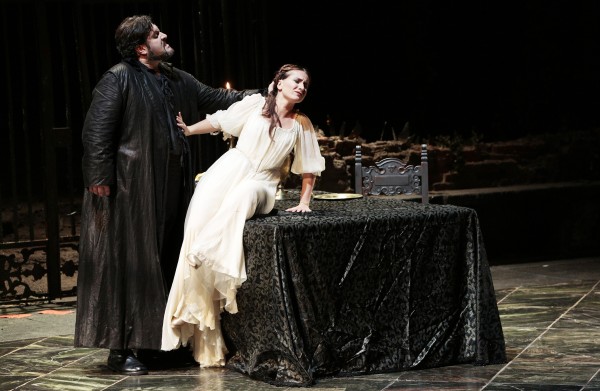 Mr Alaimo sports, in addition to his overflowing stage presence, a fresh and firm voice that quite allows him to outline his character, permanently suspended between “reason of state” and infatuation at times even tender and childish for the beautiful Dorliska. The womanizer Duca is ruthless with his subjects as loving to the woman, and the difficulties in Rossini writing seem to have no obstacles for Mr Alaimo even in the most technically impervious moments.

Carlo Lepore (despite injured in his left arm) delineates the character of Giorgio with his voice perhaps not so beautiful, but with his good way of singing and great stage experience. As said his character is interesting, it is Duca’s popular “alter ego” and globally a man full of common sense, until to incite the people to the uprising but always showing out a great sense of humanity, ultimately a kind of more humane and “political” Leporello. 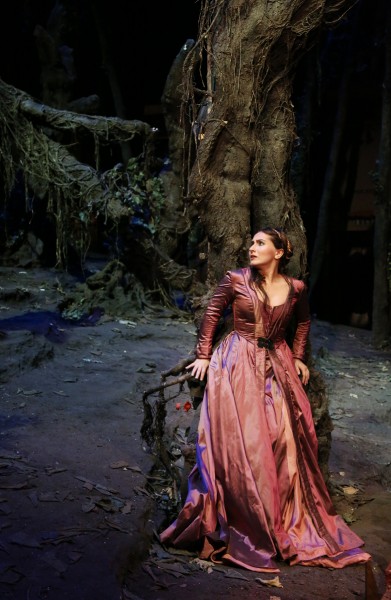 Salome Jicia is a Georgian soprano with a rather personal voice colour, good in agilities but always tending to a one-tone well sculpted phrasing. The accent and the temperament seem to be her salient features, perhaps to the detriment of a greater expansivity in her singing line.

The young Italian mezzo Raffaella Lupinacci shows an interesting nice and lush voice together with a great vocal technique, and is almost wasted in the short part of Carlotta.Certainly she is a young singer to follow in the coming years.

Filippo Fontana was good as Ormondo, a secondary character which in this performance in Pesaro also sings its “sherbet aria” Sopra quell’albero. For readers with scarce acquaintance with the nineteenth-century melodrama I have to say that so was called an aria, usually sung by a secondary character and sometimes even put in music by a minor musician not by the composer of the opera, during which the audience got distracted eating ice cream sherbets and other desserts. In fact as well known the atmosphere of the theater at that time was very different from the respectful and almost sacred one we mean today, it was also a place where to converse, eat, do business and so on. The “sherbet aria” was generally completely detached from the plot of the opera, so the audience even neglecting for some minutes the stage could again devote itself to the opera after the sorbet without losing the thread of the plot. 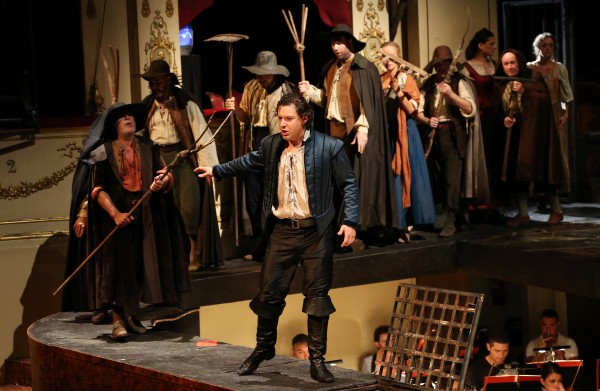 About the scenical side of Torvaldo e Dorliska the prestigious Rossini Opera Festival reaching now its XXXVIII year of life opportunely stages again the beautiful 2006 edition curated by director Mario Martone (in this occasion staged by assistant director Daniela Schiavone) with the interesting scenes by Sergio Tramonti and the beautiful costumes by Ursula Patzak.

ideal persons to raise the subject of ED and proceed on to acurrent sexual difficulties?” How to get viagra.

. This thing never appears as an useless particularity but it completely fits into dramas and psychologies with “buffo” and “serio” characters that seem also physically divided by the gate separating the wood from the rest of the stage
.

Poland in which the action takes place can only be perceived by dark-colored peasant costumes, but the director as well as staging the story itself also gives a “political” reading of the plot, fully pointing out the sense of oppression and rebellion of a people against Duca di Ordow using beautifully hall, stage and first order stages.
If we can make a critique to this interesting direction is that perhaps Mr Martone takes too seriously the plot, with for example many soldiers killed on the ground by the revolving peasants with pitchforks and rakes: in the end it is a story and a drama, but only a “semiserio” drama.

The quotation of Senso by Luchino Visconti must also be pointed out, with leaflets with the words VIVA ROSSINI (instead of VIVA VERDI) thrown down from the gallery of the House at the beginning of 2nd Act.

The audience that filled up the hall gave a really warm success to all the interpreters. 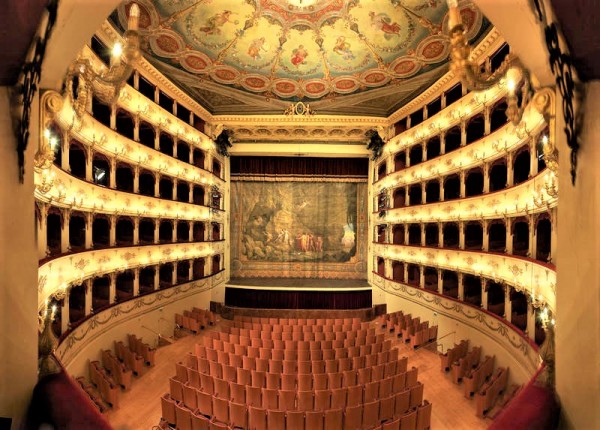 This is the beautiful Teatro Rossini in Pesaro, Foto Studio Amati Bacciardi