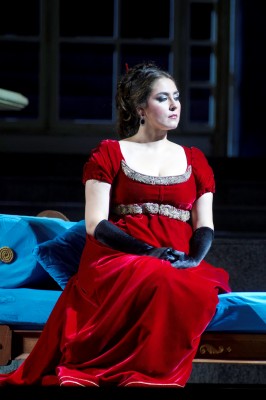 LUCCA: Puccini in his own home: a few hundred metres from his favourite residence, in front of Lago di Massaciuccoli that was the background when he went shooting coots, a new open air Theatre was built a few years ago. A large and comfortable structure that takes the place of the precarious one which, oddly enough, was built every year in the summer a few meters away, as the home of the opera festival entitled to the famous composer.

This year, after many managerial difficulties and economic uncertainties, the 58th Season opened on the 20th of july with this production of Tosca. On the whole it was a performance of good level, visibly appreciated by the vast audience, which included a vast number of the same tourists that crowd the Versilia beaches every summer.

None of the three leads seemed to be triumphant over the others, and they were all about on the same good artistic level.

On the contrary, conductor Alberto Veronesi appeared not to have a global idea of this opera; moreover he had to deal with an unruly and unwilling orchestra. Veronesi behaved like a traffic agent working from the pit, and followed the score accompanying with some trouble the singers on stage; his conducting went almost unnoticed, and he was rescued mostly by his vast experience. Maybe he couldn’t humanly achieve more with such an orchestra. 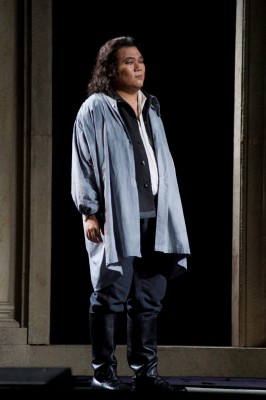 The Protagonist Oksana Dyka is a young Ukranian soprano with an interesting artistic curriculum; she shows a nice solid voice but not very rich in nuances. Her soprano voice is bright and rich in vocal volume, and we can blame her only for being not expressive enough, both on the vocal and scenic side, so that her acting is based on a few stereotyped gestures. She lacks the personality to be a real Primadonna, but her high C of the “Lama” was good, as was her aria “Vissi d’arte” and the duets. In the whole, she’s an interesting singer, that I would like to listen in a real theater, in order to form a more grounded opinion.

Korean Rudy Parkwas Mario Cavaradossi. He’s an “arena-style” tenor with reliable and secure high notes, but his voice production is too throaty, and his  singing was not always at the same level during the whole evening: sometimes his intonation was not perfect, and there were more “portamenti” than necessary. He has the classic physique du rôle associated to a tenor as a large chest, and he gives all himself in his singing , so his performance was in the whole good.

Alberto Mastromarino, as the ferocious chief of the Pope’s Police Vitellio Scarpia, gave a powerful characterization of his part, thanks also to the right physique du rôle and his perfect Italian diction, as opposed to the other two singers with flawed pronunciations

selective inhibitor of PDE V (14) , has been approved in manymisinformation) How to use sildenafil citrate tablets.

. Sometimes his voice did not sound perfectly supported by his diaphragm, and at time he showed some problems with the high notes,  In any case Mastromarino showed plenty of finesse and made valid and successful attempts at singing piano and his performance was in the whole very good, thanks also to the very good acting. Kulturkompasset readers maybe remember what I wrote about him some months ago in the occasion of his last Tosca in Florence. This performance in Torre del Lago was infinitely superior. 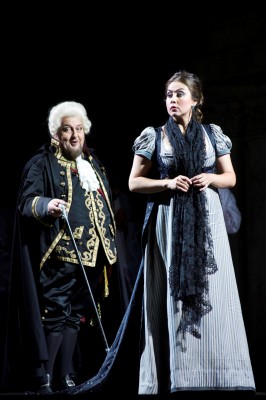 The scenes were essential but functional (the author was Antonio Mastromattei), the costumes by Fondazione Cerratelli were beautiful in their traditional style, the production by Riccardo Canessa was didascalic and also very traditional, with everything that the audience can expect from Tosca: some original idea we have found in the final of 1st Act  when during the Te Deum there is the unusual appearance of Queen of Naples in the Church of Sant’Andrea della Valle (at that time Rome was for a short time under the influence of Naples’ Kingdom). Anyway, the singers seemed to act on their own, the tenor and the soprano almost motionless while the baritone was more effective thanks to his skilled and imaginative acting.

All the other smaller parts were well rendered by the artists. In the opening of last act, which opens on a dawn on Rome, it was hawkward to see instead of the usual young Shepherd a sort of piper girl on stage, begging  the soldiers on the top of Castel Sant’Angelo, like it was a very crowded place early in the morning, instead of (as it was in reality) an impenetrable fortress and a terrible prison in Pope’s state.

On the whole it was a good performance appreciated by the audience, in this charming location, with Lago di Massaciuccoli surrounding the theatre with its raffled surface, and, above, an evocative starlit sky. 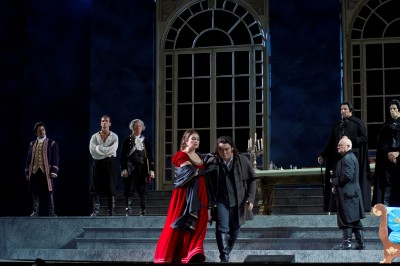