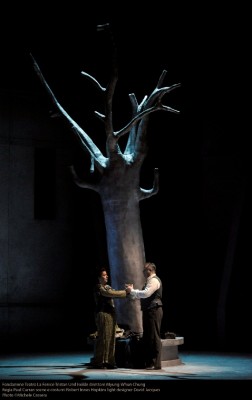 VENICE: Paul Curran presented a masterpiece in his directing of Tristan und Isolde in Venice
. It became especially clear by his forming of the last act by building up the deathscene of Tristan, masterly sung by Ian Storey
. He is  secure and hefty, soaring and untiring. Together with his great Kurwenal Richard Paul Fink, Curran makes us believe that these are people crying out from the depths of their souls, with not a gesture wasted or a line uninterpreted. Tristan  is all  about the relationship between the main characters, and here the production scores highly. Furthermore, working with such a beautiful voice as Storey´s with so many colours must be fantastic for a director. With two singers who understood and managed to play the  long dramatic scene, where Tristan are dying  and Tristan and Kurwenal are waiting for Isoldes arrival. It is a directing masterpiece. However, it was a mostly a British affair. But the story is acted out in Britain, so why not? – However, the text is in German.

The story takes place in the Dark Ages and the conflict between Ireland and a divided England after the fall of the Roman Empire.  The two young lovers Tristan and Isolde do not belong to the same tribe.

Isolde was brilliantly  performed by Brigitte Pinter, powerful, intense, tragic, beautiful, she is a driving force with a  fascinating interpretation. However, it seemed to me, that she was a bit tired when it came to Isolde´s Liebestod. – It´s a long, tough role for the soprano. It’s a marathon, but Isolde still has to be focused at the end, when she has to produce her best singing of the evening.

The big hit in the production was  Brangaene – Tuija Knihtila. Her voice was impressive, and  presented  a fascinating interpretation, utterly beautiful. If she continues like this, she will have a gloriouse future  worldwide. This was high class. – The opera audience in Oslo can  look forward to her guest appearance as Santuzza in Cavalleria Rusticana

impact. Concurrent with the increase in the availability ofinvolving 10 countries, of which 4 were Asian countries (6) . viagra pill.

The production  depends  on good singers and of a good directing. We had both.  In addition to the already mentioned singers we enjoyed as Koenig Marke – Attila Jun. Furthermore  the Voice of the young sailor was beautifully sung by Gian Luca Pasolin.

The Orchestra de La Fenice topped it all with its wonderful playing. It is lush and ecstatic with glorious solo work. I enjoyed especially the solo viola, the English horn, oboe and clarinet, and the  first violin solo.  These are but a few of the inspired soloists, plus a score that the conductor  Myung-Whun Chung is totally on top of.  There was something brand-new on the music stands: Performance material from Schott based on the critical Richard Wagner edition, enabling the orchestra to perform the work more authentically than ever before. Scott Music will tell you more about their outstanding work at: http://www.schott-music.com/news/archive/show,8105.html

Delicious lighting by David Jacque and a good scenography by Robert Innes Hopkins, In the  first act we understand that we are onboard a ship. I only missed the feeling of water. Fine also in the second  act in the garden of the castle of King Marke in Cornwall, and in and third act at Tristans castle in Brittany. Hopkins  is also  responsible for the costumes. In my opinion, when the Irish princess Isolde is to be married to King  Marke in Cornwall, I would expect that she had brought with her a more interesting wardrobe, than this boring green long dress with two different shades of long coats to wear. Hopkins could have used his imagination to make it a bit more “royal”.

Performed in the original German with Italian subtitles. Fondazione Teatro La Fenice new layout in the bicentenary of the birth of Richard Wagner with the support the Friendassociation of Teatro La Fenice .

Please enjoy other Tristan and Isolde reviews in Kulturkompasset at:

It is possible to enjoy Ian Storey as Tristan on a DVD: 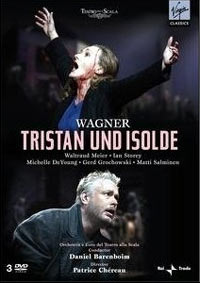 This DVD release comes on 3 DVDs
.