PISA; The inauguration of the new season of the Teatro Verdi in Pisa was a very pleasant evening
. Turandot comes back to this glorious opera house when many years ago Maria Callas, Beniamino Gigli, Titta Ruffo graced the stage, with such conductors as Toscanini, Mascagni, or Leoncavallo. 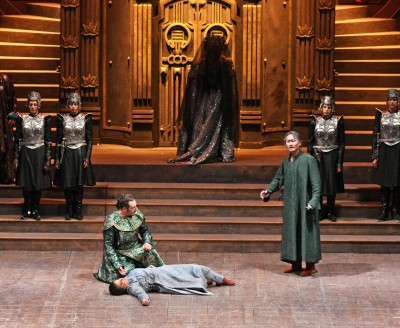 This production, in collaboration with the Torre del Lago Puccini Festival, finds its unifying element in a  young and interesting conductor, Valerio Galli, as well as the charisma and experience of Giovanna Casolla, an Italian soprano for whom Turandot has become the “rôle fétiche” of her long career.

Born in Naples, the singer has had a long experience as a lyric spinto soprano, although she has some mezzo roles in repertoire. Her current vocal difficulties are undeniable, even if her performance went in crescendo. Some notes are even really bright as they were in past times, but on the whole her vocal line is fragmentary and forced in every register, and her voice sounds senile and not very agreable

. She shows off her claws in the final scene (composed by Franco Alfano, because we know that Puccini died before completing the opera), and actually the final duet was the best moment of her performance. 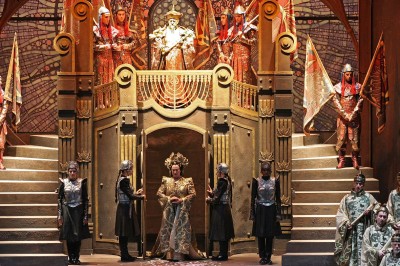 Tenor Stefano Lacolla has a good voice, but he seems not able to manage it as well as he could. His generosity is remarkable but he lacks personality. Sometimes his voice seems not well supported, also with some pitch problems.  Despite a rather generic phrasing, he was quite good in some key moments of his role, such as the final duet and the aria Nessun dorma, of which he gave an encore.

Silvia Dalla Benetta was at her debut as Liù, and she displayed her important and refined soprano voice, portraying a timid and sensitive character, in line with the tradition. Bass Choi Seung Pil was a good actor as well as vocally correct. 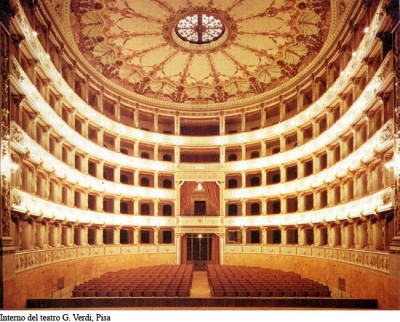 The beautiful Teatro Verdi in Pisa.

The three masks were Massimiliano Valleggi, Mauro Buffoli and Cristiano Olivieri, more appreciable as actors than as singers. The rest of the cast was of good average level, as well as the Choir.

Conductor Valerio Galli is the most interesting element of this performance, which joined experienced voices together with some new musical hopes. The young conductor, born in Viareggio (he’s only 32), showed a great affinity for Puccini’s music, which he clearly knows like the back of his hands (maybe because he breathes the same air of the great Composer?). He highlighted every colour, palpitation, sweetness, the great musical phrases of strings, the prickly notes of the “strumentini”.  His view of the score is symphonic but he doesn’t forget that he’s telling a story with theatrical pace, and creates a suggestive sound carpet for the voices: it’s not easy to have a conductor who is able to underline the orchestral colours, and at the same time  follow the singers in such a natural way. Valerio Galli is a young conductor to follow, and I hope to listen to him soon and more often in the future.

Evocative staging was created by director Maurizio Scaparro with the collaboration of Luca Ramacciotti, with beautiful scenes by Ezio Frigerio and adequate costumes by Franca Squarciapino.

Into the traditional scene, but with some art nouveau inserts, the gloomy story is developing in a fantastic and barbaric China, with evocative whirling scimitars, and with not too many chineserie as often happens on stage in Turandot. Visually essential, often suggestive (but in the ensemble we would have preferred some more people on scene) and some lacks in dramatic tension, but on the whole a good staging, very well located in the beautiful Teatro Verdi.

The opera was really well greeted by the public which filled the sold out theatre, but the warmest applause, a real triumph, was for the young conductor.