PARIS/FRANCE: I must admit that the latest premiere at Palais Garnier, and the first ballet premiere with Benjamin Millepied as new balletchief for the Ballet de l´Opera de Paris, showed an uninteresting, boring Millepied and Robbins at Garnier, Paris

. The only two things who lifted it was the very good orchestra, conducted by Maxime Pascal, with brilliant violin soloist, and the finale number in the program, “Theme with variations”  by Balanchine to Tsjaikovskijs music.

In Millepieds piece, “Clear, Loud, Bright, Forward” – a creation to this company
. It seemed to me like there has been a lack of rehersal time. Furthermore, never a clear line between the dancers, and in addition the arms were like Mary Go Around arms, where every one danced like they were feeling, it was most comfortabele for them to do out of what the coreographer have told them to do. – Typically for the “American tradition” of waving arms. The music is by Nico Muhly. Strange diturbing light design by United Visuel Artists & Lucy Carter who also is reponsible for the scenography (that i didn´t notice). Costumes Iris Van Herpen. – a not succesfull opening ballet for the new balletdirector. Hopefully he will succeed later, if he want to continue to choreographe.

The same partly continued in Jerome Robbins piece, “Opus 19/The Dreamer” (from 1979) to music by Sergei Prokofiev
. where Amandine Albisson and Mathias Heymann were the leading dancers at our evening
.

First in George Balanchines piece, the famous “Theme with variations” (first time performed at Opera de Paris in 1993), the final numer of this evenings performance, it seemed like the dancers was feeling well prepared and did a good job, their final long Polonaise was great.  The grand pas de deux was interesting as it ended with the pas de deux part, and we hade the two soloists solos before the pas de deux, contrary to what is normal habitude. Peter Tsjaikovskys music is wonderful to this ballet, and the two leading soloists Laura Hecquet and Josua Hoffalt did their absolutely best this evening, Sandra Jennings has recreated. The audience could feel that the dancers enjoyed being on stage in this ballet. 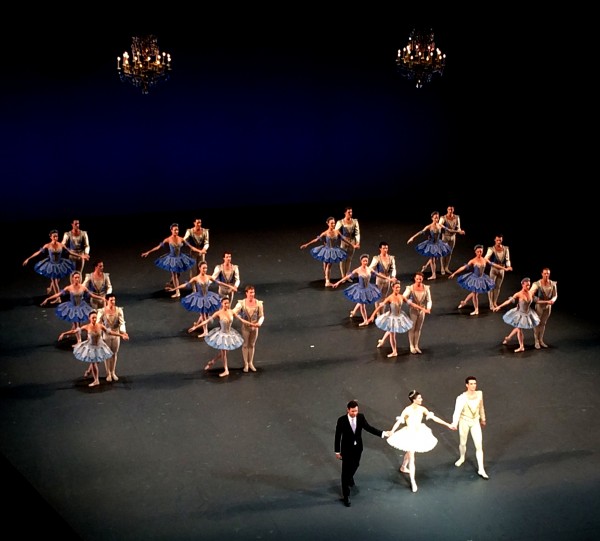