Urmana in Cavalleria Rusticana at Bastille. 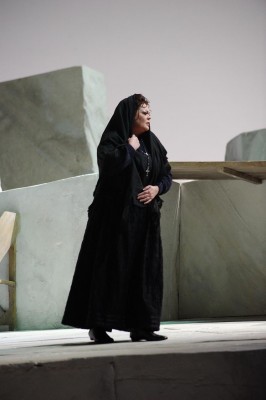 PARIS: Opera Bastille is premiering a new Paris production of Cavalleria Rusticana by Pietro Mascagni to an Italian libretto by Giovanni Targoni-Tozzetti and Guido Menasci, adapted from a play written by Giovanni Verga based on his short story. Performed together with I Pagliacci (Bajazzo) by Ruggero Leoncavallo.

As often at Opera de Paris we are enjoying star casts. In the first opera mentioned Violeta Urmana as Santuzza, with Marcello Giordano as Turiddu and Franck Ferrari as Alfio. It is the first time that Cavalleria Rusticana is being performed at Opera de Paris, as it has never been performed at the Palais Garniier or Opera Bastille. But it has been at Opera Comique on numerous occasions between 1892 and 1071.

In Bajazzo Brigitta Kele as Nedda, Vladimir Galouzine as Canio and Sergey Murzaev as Tonio.

The staging is by Giancarlo del Monaco. He has the routine, and knows his handwork, the regi is functioning well. 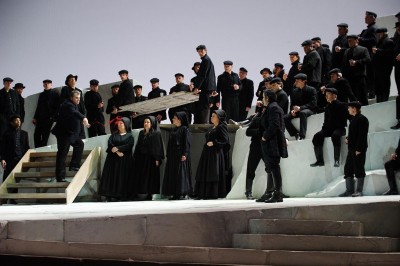 Cavalleria Rusticana, meaning litterally “Rustic Chivalry”,  is absolutly wonderful. Urmana as Santuzza is on stage all the  one hour and 15 minutes, a marathon, but a beautiful marathon. She started with a bit too much vibrato in the very first part together with Mamma to Turiddu, Stefania Toczyska, but when she got warm, it was over, and it became a very beautiful experience.

Santuzza´s most wellknovn aria Voi lo sapete – “Now you shall know”, where she tells Lucia the story of her seduction by Turiddu and his affair with Lola, was outstanding, a highlight this evening.

Urmana is in this setting perfect in the role, she has the temperament, the beauty, sincerety, and wonderful musicality, which gives the demanding role as Santuzza all it needs to be trusted. 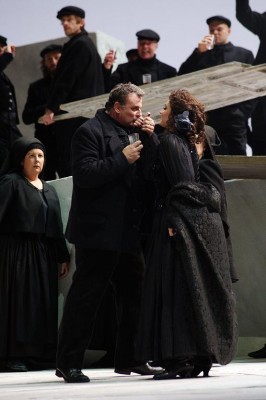 Turiddu – Marcello Giordano has also a beautiful voice,  and the Sicilian dialect, unfortunately he is a bit unrythmic. Which disturbes several times his arias, and allready was clear from his first  Siciliana aria,  “O Lola, lovely as the spring’s bright blooms” offstage.  Later his famouse  Viva, il vino spumeggiante – “Hail to the bubbling wine!” Later, when he shall go to have the duel with Alfio, he feels that some thing can happen, and he calls on his Mamma to bless him, He tells her that he is going outside to get some air and asks that she be a kindly mother to Santuzza if he should not return, that she shall take care of Santuzza, that he in fact loves deep in to his heart: Un bacio, mamma! Un altro bacio! — Addio! – “One kiss, mother! One more kiss! – Farewell!”.  Hovever, spite in his unrhytmically singing.  In his cooperation with Urmana, and the young Nicole Piccolominiwho sings, and played Lola, it works well. Giordano is great, and he is the right type for the opera. 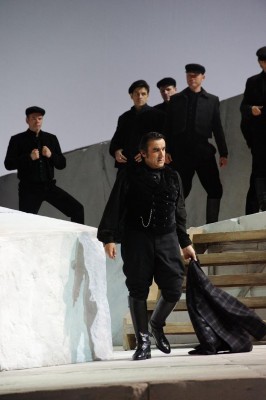 With great pleasure, i enjoyed Franck Ferrari as Alfio, he is the type for that role, and the casting departement has once again done a good casting job for Cavalleria Rusticana.

Giancarlo del Monaco is staging, and his details brings us in to a religiouse (catholic) world, at a small Sicilian village on Easter Sunday in the 19th century. The history is about love, betrayal, jealousy, vengeance, blessing, death. – In sicily the codes of chivalry are those are those of honour. The story is one of extreme simplicity condensed into a single place and a single day.  The composer sets a bloody event in the heart of of the daily life of a small Sicilian village. The music is often evocative of the popular songs of southern Italy, perticularly in Turiddus,s arias (Siciliana O Lola.  Brindisi,  Viva, il vino spumeggiante – “Hail to the bubbling wine!”. The originality and modernity of the opera is rooted in its short, one-act format (separated into two parts by an intermezzo).  which at that time was highly unusual. The style is characterized by an orchestral intensity and by the abandonment of sophisticated vocal ensembles that were prevalent in opera at the time (1890). Along with I Pagliacci (Bajazzo) by Ruggero Leoncavallo, Cavalleria Rusticana is the most representative work for the Italian Verismo movement. Based on the realistic and direct evocation of “real-life situations”, it is a far cry from the intrigues portraying noble, historic or mythical characters to which opera was generally confined. 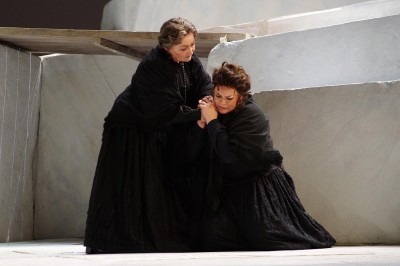 Johannes Leiackernis responsible for the interesting decoration, build up op large “stone walls”, which gives thenimpression of the cold village, church square, and houses. The costumes are in black by Birgit Wentsch, made with details in traditionel Sicilian style. Effectfully. Followed up with good lightning by Vinicio Cheli. 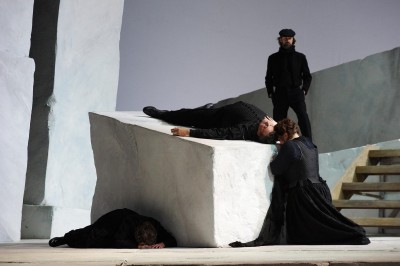 The opera choire, has a demanding role in this production, starting off stage singing of the beautiful spring day (Gli aranci olezzano sui verdi margini – “The air is sweet with orange blossoms”) and a hymn to the Blessed Virgin. Later inside the church is heard singing the Regina Coeli. Outside, the villagers sing an Easter Hymn, joined by Santuzza. In Viva, il vino spumeggiante – “Hail to the bubbling wine!” they joins Turiddu
. The choir did an outstanding job, and for such a production it is fantastic to listen to a choir of app 80 singers. The conductor Daniel Oren, knows his music, and he is a good listener, who gives the time to the singers that they need, and also are speeding up, the tempi when needed, so it dont loose the temperament. The musically Intermezzo was a highlight. It  is again a pleasure to listen to the brilliant orchestra with many wonderful soloists. 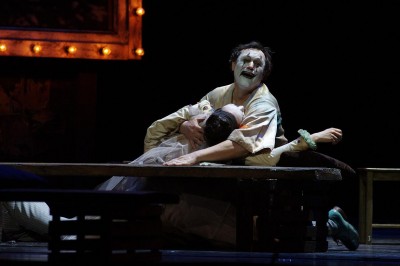 PAGLIACCI (BAJAZZO) Players, or Clowns), sometimes incorrectly rendered with a definite article as I Pagliacci, is an opera consisting of a prologue and two acts written and composed by Ruggero Leoncavallo. It recounts the tragedy of a jealous husband in a commedia dell´arte troupe. It is the only opera of Leoncavallo that is still widely staged. Pagliacci premiered at the Teatro Dal Verme in Milan on May 21, 1892, conducted by Arturo Toscanini. 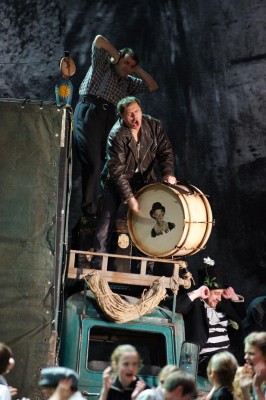 Giancarlo del Monaco is in this production of the two operas trying to bring them together, as he let the audience get Tonios (Sergey Murzaev) opening arie for Pagliacci as an opening aria before Cavalleria Rusticana starts, where  Tonio in a “normal” dark suit, with coat and hat is entering the hall, addresses the audience. (Si può?… Si può?… Signore! Signori! … Un nido di memorie.) He introduces him self as the composer´s spokesman: These dramas will show men as they are. The action and feelings of everyone will be an expression of the truth. He reminds the audience that actors have feelings too, and that the show is about real humans.

In fact this works well as an introduction in this specially case, and gives us like a framework, but usually Tonio is dressed as his commedia character Taddeo, and then it gives another effect. – The problem for del Monaco is then, that after this opening aria, comes the long beautiful ouverture for Cavalleria Rusticana, and we are being moved from one world back 120 years, and after that opera we are after a 30 minutes break going forward in time again to Bajazzo. 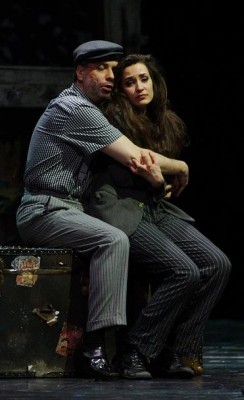 Place: Calabria, near Montalto, on the Feast of the Assumption. Usually between 1865 and 1870. But this version of Pagliacci is taking place much closer to our time, with a more modern touring bus/truck with a stage on the charge.

Pagliacci was an instant success and it remains popular today. It contains one of opera’s most famous and popular arias, “Recitar!… Vesti la giubba” (literally, To perform! … Put on the costume,) sung by Canio, which in Paris was playd by the good tenor Vladimir Galouzine. This aria is a hit in the opera. 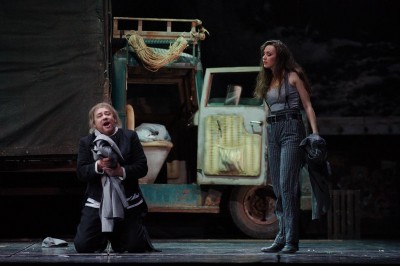 After the wonderful Cavalleria Rusticana, Pagliacci is becomming an anti climax. The music is wonderful, the soloists good, choire very well functioning and singing.

But for Pagliacci Opera Bastille is too large a hall. We look at something going on on stage, but it dont touch us as much as the first opera this evening.

assessment of all patients presenting with this complain. cialis online high or low risk category.

. Pagliacci needs a more intime contact between the audience and the singers.

The history, and specielly when we are coming to the drama played on the small stage on the stage is not reaching out. And as often before, it is rather bad lighted by Vinicio Chelli, so we dont get help to see the faces and the mimic, which is very importent in Pagliacci.

Of course, I do understand the financial part in this, it is easy to fill up so big a house when two good operas is being performed the same evening, with outstanding singers. But in fact, it is not a good reclame for the “opera” that it dont touch my heart, and in the history, it is an heart toucher.

The cast in addition to the three names allready mentioned  is Florian Laoni as Beppe. Tassis Christoyannis as Silvio (Neddas lower). The Due Contadini (peasants) was sung by Antonel Boldan and Char Wook Lim.

In addition to the Choir of Opera de Paris , we too enjoy the childrens choir, Maitrice des Hauts-de-Seine, who helps very much to give the right atmosphaere. 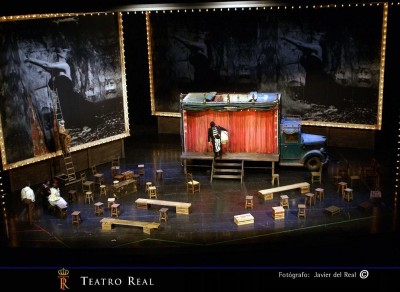