Wonderful Sound of Music at Chatelet 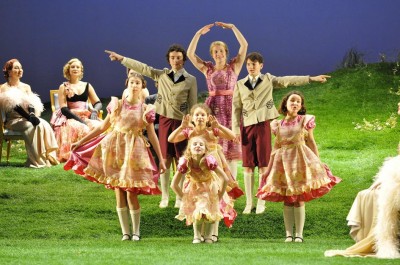 Sound of Music at Chatelet. Photo: by: Marie-Noëlle Robert

PARIS: Sound of Music at Theatre du Chatelet, Paris: It can´t be done better than this.

Of course a production can be done in many different ways; someone will like the one better than the other. But with my musical and theatre experience. “It can´t be done better” than what we see at Theatre du Chatelet today. Sound of music was wonderful, and we were many who were getting tears in our eyes more than one time during the performance
. For me the first time was when Captain von Trapp opened up his heart, and was singing together with his children’s, that happened the day when he came home with Baroness Schraeder and should present her to the children, and first was irritated that his children’s was singing, but then opened up, and sung beautifully with them.

Furthermore this production has a great force as they are having many very good singers. First of all Katherine Manley as Maria Rainer and her beautiful voice does that she is perfect in the role as Maria. She marked early that she has “bone in her nose” That she has got a Captain Georg von Trapp, William Dazeley. Who also can sing, and how beautiful and masculine he is singing. Mother Abbess was played with a warm heart, more positive, than I have met in performances that I have seen earlier

studies, it has been found to have modest efficacy in sildenafil the time) Most times.

. That gives her role an extra positive warmness, that suites the role well we enjoyed Lisa Milne in that role. In addition the second couple Liesl and Rolf Gruber, brilliant performed and very beautiful sung by Rebecca Bottone and the handsome James McOran-Campbell. That both of them also managed to look like they could be 17-18 years old is a must in this performance. – When I am looking two-three years forward, they could together be a very handsome couple Maria and Georg von Trapp. Something for the casting department and the planning section to think about.

Sound of Music at Chatelet. Photo by: Marie-Noëlle Robert

Nicholas Garrett was good as Max Detweiler and Christine Arand as Baroness Elsa von Schraeder, and that they also had their own songs was suiting well into all the production, and appreciated from the audience, and it was filling out the knowledge that we should get about the personalities in the history.

In addition to the already mentioned Rebecca Bottone, wonderful as Liesl, her sisters and brothers was as follows: Antione-Aurèle Cohen-Perrot as Friedrich. Vanessa Starcevic as Louisa. Elisa Bergomi as Brigita, Henri Pinhas as Kurt, Élénoree Jander was Marta, and Eva Baranes good as little Gretl.

In the staff we enjoyed Lee Delong with glimpse in her eyes and a good mimic attitude as Frau Schmidt, a role she got very much out of. Martin Vaughan Lewis as Franz. Admiral von Schneider was Leslie Clark and Olivier Podesta played Herr Zeller.

The very curious nuns, with many amusing details, were leaded by three of them Claire Geoffroy-Dechaume as Sister Berthe, Isabelle Poinloup as Sister Margaretta and Béatrice Dupuy as Sister Sophie.  And I am sure that no one in the audience noticed when there (by practical reasons?) were male figurants among the nuns!

Sound of Music at Chatelet. Photo from repetition by: Marie-Noëlle Robert

The English diction on stage was good, even by the children’s, and Maria sounded exactly as Maria (after heard it so many times with Julie Andrews as the icon in the role on film) shall sound.

The orchestra was well arranged and prepared, the introduction a capello with the mother Abesse and her nuns first hidden, then discretely seen was very beautiful done. The conductor Kevin Farrell holds it all in his hands, with great success, and I liked that he was building up good climax with his musicians and singers all the times. The Orchestra Pasdelopu played well (as it use to do).

The staging by Emilio Sagi worked very well, he had understood to take good care of the children, and made them being alive on stage, and when they now are “getting warm” it will be even better. Daniel Blanco has made very good solutions for his wonderful scenography, so it was easily floating in the many shifts between completely different places. Jesus Ruiz costumes was great, in the ball scene, and for Baroness Schraeder, some of the outfits for the girls was very very good, perhaps even a bit too elegantly as we are supposed to be out in the countryside in Austria, some of them could have been looking more like farmer women’s? But elegant they were. Sarah Miles has made good choreography for all the participants, and the most important, they managed it. Great light by Caetano Vileta.  The moving in and put with furniture’s was elegantly taken care of by the figurants, who also looked good on stage in the ball.  – Where the ball room became amazing because of the 12 crystal chandeliers.

It was demonic when there during the festival concert, where we the audience became parts in the play, and the Nazi soldiers was standing in front and around the audience in their Nazi costumes. Many were thinking their own thoughts. – A good and well made effect.

This was one of the many evenings during a year that I will remember with pleasure for a long time.

Music by Richard Rodgers, Lyrics by Oscar Hammerstein II Libretto by Howard Lindsay and Russel CCrouse. Inspired by The STory of the Trapp Family Singers. by Maria Augusta Trapp.

A good program with beautiful pictures.

The French Minister of Culture Frédéric Mitterrand attended the premiere of Sound of Music.