By Henning Høholt on 5/12/13 • Categorized as Ballet,Festival 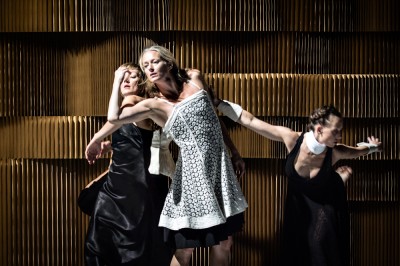 The Norwegian Zero Visibility (founded 1996-) participated at the 17th Edition of the New Baltic Dance Festival, which is going on right now in Vilnius, Lithuanias capital.

VILNIUS: It presents their production AGAIN, an artistic cooperation between the choreographer Ina Christell Johannessen and the swedish composer Marcus Fjellstrøm, which is a coproduction with NordlandsOperan, Umeå in Sweden, where it was premiered at NordlandsOperan with Operaens NoO Symphony  Orchestra, which has played in the music on tape, to follow the company on tour. The production is also a cooproduction with Bærum Kulturhus, close to Oslo, Norway, where it will be presented this autumn. It presents Seven dancers and one performer/noise musician, and in this case the composer, Marcus Fjellstrøm him self, who was present and participated

Erectile dysfunction is a symptom based on the patient’s viagra generika kaufen ohne rezept and reconsider treatment of.

Normal erectile process begins with sexual stimulation in cialis from canada for establishment of the diagnosis..

The Scenography is very interesting inspired by an accordion, where moving walls  oversized as bellows in an accordion, which could change the stage complitely from large to small and intime, which gave fantastic feelings during the performance

are keen to try more invasive forms of treatments. The sildenafil side effects Peripheral vascular disease. 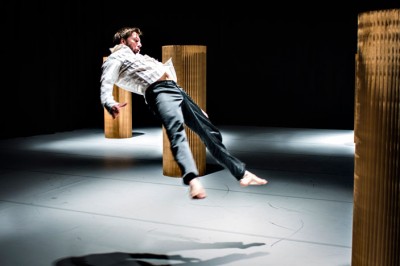 AGAIN is so far the best of the productions by Ina Christel Johannessen that I have seen. Well functioning costumes with good taste, nice dancers. Many parts in AGAIN are very good, wellfunctioning, with brilliant dancers, starring Camilla Spidsøe Cohen, which also is solist at the Norwegian National Ballet, together with an interesting cast of contemporary dancers, Line Tørmoen, Pia Elton Hammer, Kristina Søetorp, Sudest Adhana, Máté Mészaros, Antero Hein.

The best parts are the beautiful openaing part with a long pas de deux with Camilla Spidsøe Cohenand a male partner,  and the second last part, where the dancers, are performing a classical inspired dance, around the scenography, as described above, but now formed as classical columns, very deliciouse. 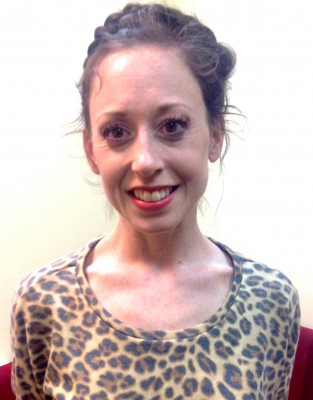 AGAIN is described as acomplex interplay between written music, large electronic clusters, musicians, the orchestra, dance and the visual scene. 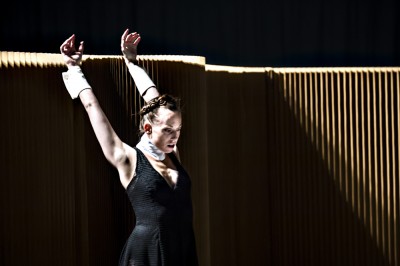 Camilla spidsøe Cohen in one of her solos. Photo: Zero Visibility corp.

The choreographer has developed an artistic strategy that exceeds some of the oppositions in contemporary dance; between  art-dance and pop -dance, “pure dance” and theatrical dance, humorouse dance and seriouse dance, and is  as usual, moving between dance teater, avantgardic movements, and, for me,  “controversual” use of the dancers on stage, such as stepping with heavy boots on the piano tribe frame with strings, to give an effect which, however, for me, was rather unmotivated and seemed tasteless and crude. But also including unmotivated fight scenes between the three male dancers, which was as an effect. Contemporay dance, Too much standing still, and also too much running around on stage. However during the way also with classical inspirations, which is good for the variations in the performance.

Ina Christell Johannessen has during her years as choreographer managed to be noticed in many parts of the world. Some of the audience loves her works, others doesnt. It is the artistic privillige for an artist to form their work, and in this case contemporary dance theatre, as they want.

Johannessen tells her self: 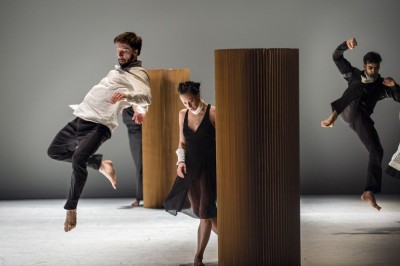 “For me, dancing is in the mind, that is to say, it is felt, moved.
It is the thinking body that I am trying to express, or get the dancers to express
.
And how does a body, a person, think?
Everything is thought, or observations: an arm that moves itself starts a thought, or was the movement started by the thought? And does the thought then trigger emotions or lead to conditions which move the body – and cause the spectator to be moved?
And how does one transfer the authenticity from the performer to the spectator/audience?
Movements to move or be moved by…”

Please enjoy excerpts from the interesting performance at: http://www.zerovisibility.no/performancesschedule/again 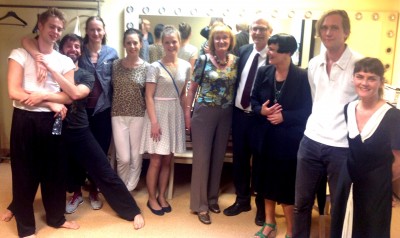 Some of the dancers and staff, around the choreographer Ina Christel Johannessen, and the composer Marcus Fjellstrøm, right of her, and the Norwegian ambassador Leif Arne Ulland and his wife. Photo: Henning Høholt