By Henning Høholt on 6/08/12 • Categorized as Classical music,Festival,Opera

ALMAS SVILPA – In the footsteps of Ingvar Wixell and Bryn Terfel!!! 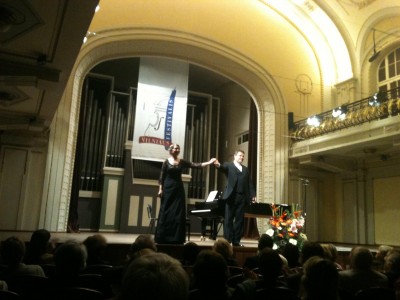 VILNIUS: It was a wonderful concert at the Vilnius Festival 2012 with Almas Svilpa, bassbaryton and Audrone Juozauskaite, piano, with a good concert programme starting with Dmitri Sjostalovitsh Suite Michelangelo Buonarrottas poems, which Sjostalovitsj got to know late in his carriere and then gave each single poem their names, out from the content. For Sjostakovitstj the most importent was the wisdom, love, creativity, dead and eternity that Michelangelo presented in the poems, and he then gave the 11 poems the following names: Truth. Morning. Love. Separation. Wrath. Dante. To a Deportee. Creation

Misconception of ED and generic viagra online and recognition of ED’s associated medical and psychological.

These Sjostakovich songs, opus 145, were the opening part of the recital with Almas Svilpa and Audrone Juozauskaite at the Vilnius Festival at the Philharmonic Hall in Vilnius, which was nearly filled up, and where the program was recorded for TV.

Compared with the rest of Sjostakovich relatively well-known compositions, the Michelangelo songs can be lumped into the “all-but-forgotten” category. In fact, further investigation reveals that the number of recordings currently available can be counted on two hands. Forgotten does not mean unworthy, though Sjostakovich’s grippingly dark, late work the Suite on Words of Michelangelocan certainly testify to that. And here in Vilnius we got them live.

Though dissatisfied with Abram Efros’ ‘inadequate’ translation, Sjostakovich considered that Michelangelo’s immense creative power shone through in these texts. Belying the composer’s failing health, the verses are vigorous. Virile love retains comparable prominence to artistic creation; take the second poem, Morning, with its lusty concluding line, ‘Oh, how much there is to do here for my hands!’ Even the poem Shostakovich entitled Death is not a contemplation on the coming void, but rather a robust protest against rottenness in political society. ‘The soul wishes for death’ not due to any diminishment of the body’s yearning for sensual pleasures, but rather because:

‘The world is blind, shame rules
and evil triumphs over honesty.
There is no hope; gloom covers everything;
And falsehood reigns, truth hides its eye.
… oppression weighs down the soul’

Almas Svilpa immediately catched the audience. The Sjostakovich songs are having many variations, as described in the names. , whoch also are closely underlined in the solistic accompagnement excellent performed by Audrone Juozauskaite, who followed, and/or leaded with the most brilliant accompagnement, an intricate solistic part in it self.

Almas Svilpa has a wellsounding voice with deliciouse timbre, his diction is brilliant, and in the Sjostakovich songs the melodic russian language added an additional dimension to the work. In the Sjostakovitch songs, Svilpa was sometimes too concentrated in following the scores. But i am aware of that these poems are demanding, and they are also not poems, which you can have on the programme weekly.  As in the second part of the programme where Svilpa performed operaarias, that he clearly are very familar with.

However. As i suppose the Vilnius Festival is supposed to be an additional offer also to the hopefully many tourists guesting Vilnius. Spite in difficult communications, and the world wellknown homophobia in the country, and the capital. Lately clearly expressed at the Seimas by a homophobic parlament member in front of ambassadors from the leading countries in the world.  – To my pleasure, I noticed  that some parts of the programme was well made with also English information, unfortunately the well written information about the Michelangelo songs which in Lithuanian language gave the listeners a good information for Sjostakovitsh background for the work! It Wasn’t translated, and furthermore no text from the poems, neither in Lithuanian or in English. I suppose they exist in print somewhere, so it has been easy to print the texts out on an A4 sheet. This would have given all the listeners who don’t understand Russian perfect an additional pleasure to enjoy the interesting and philosophycal texts. 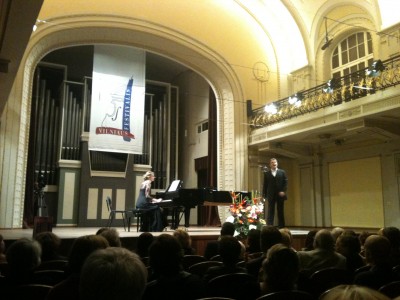 The tourists of all kind and visitors from abroad are importent for Lithuania, as they are bringing valuta with them to strenghten the economy of the country, and bringing memories back when they leave. For the future it is of highest importence that these memories are good, as it was with this outstanding concert. The homophobic memories are extremely negative, and is not good for Lithuanian attraction to its guests.

The second part of the concert became “A Bravour” concert where Almas Svilpa and Audrone  Juozauskaite performed all their elegance, brilliance, virtuosity, coloratura and beauty in a demanding programme with highlights from the international oratoria/operarepertoire starting with Hercules majestic aria from Georg Friedrich Händels oratorio of the same name! With virtuose coloratura, – and we noticed the very good pianoaccompagnement, which is usually for baroque orchestra and which is very difficult to play for a pianist alone
. Bravo.

Then Figaros aria from Wolfgang Amadeus Mozart´s The Marriage of Figaro. Another virtuose bravour aria. Then more bravour with Michail Glinka: Falafs rondo from the opera Ruslan and Lyudmilla. Then it changed charactere to lyrical, Sergei Rachmaninov and his Alekos cavatina from the opera Aleko.  Of course for a bassbaryton of Almas Svilpas world format, he also encluded Giuseppe Verdi, with Attilas heroic Aria from the opera Attila. It all finished with The Dutchmanns demanding dramatic monologue from Richard Wagners wonderful opera The Flying Dutchmann.

During the second part of the concert I got memories of some other big world famouse bassbarytons, first the late Ingvar Wixell, and then two still going strong, Terje Stensvold, touring around inn all the world as the Dutchman and Wotan, and of  Bryn Terfel. Almas Svilpa is at the same international level. I hope his agent is aware of that? If not, he need to change agent, as he is of world wide dimension and qualit, and the famous stages and houses of the world need him, his voice and his stage apperance.

Furthermore in this programme, I enjoyed very much that we didn’t only got programmed all the wellknown bassbaryton arias from the famous composer mentioned, we got something that someone perhaps bever had heard, and that these arias, gave the sinibging soloist the possibility to improve his outstanding actor talent, and was expressing us the personality of each of the characters he was expressing.

The quality of each of the arias, was strongly underlined by the virtuosit, sensitivity, attentiveness, mastery and beauty from the piano, – Audrone Juozauskaite – who some times sounded like a whole orchestra.