By Henning Høholt on 6/16/12 • Categorized as Classical music,Festival 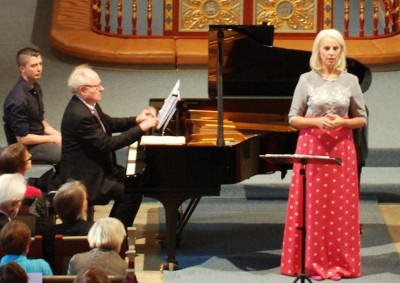 Anne Sofie von Otter – A world star at her very best in a romanze recital in memory of Kirsten Flagstad in Hamar with Bengt Forsberg at the piano. Bengt Forsberg played a wonderful Isodes Liebestod arranged by Franz Liszt absolutely wonderful. The highlight of the evening in Hamar Cathedral, friday 15 june
. 2012.

HAMAR: The art of romances performed by Anne Sofie von Otter, mezzosoprano, together with  Bengt Forsberg at the piano, was splendid performed by two outstanding artists, to the memory of that itthis year is 50 years since the dead of Kirsten Flagstad. They started the concert with three of the songs by Edvard Grieg that was on Flagstads repertoire

.  The artists know how to preesent this kind of repertoire in addition to ms. von Otters wonderful voice, musicality, her expression, power, intimity, she know how to form the romances and give them the little extra that gives the audience a good experience of the program presented. 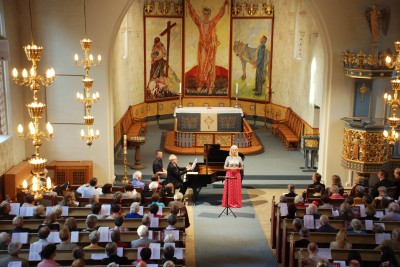 After the Grieg opening, they presented songs by Adolf Fredrik Lindblad, that perhaps Kirsten Flagstad didn´t even know about, he was born in 1801, and in addition to othe musical works wrote 215 songs, his muse was the Swedish Nightingale Jenny Lind.  “Der schlummernde Amor, Varning, Svanhvits sång, En ung flickas morgonbetraktelse” the last one an amusing history about what a young girl watched in the morning. The program continued with Johannes Brahms: Ballade in D-major opus 10.2 solo by Bengt Forsberg, and first part of the concert ended with 5 songs by Franz Schubert.

After a break, Edvard Grieg romances continued the concerts, where the last one “ Og jeg vil ha meg en hjertenskjær” (and I want me a heart love) a little pearl of a popular happy song charmed the audience. This was followed by two songs by Franz Liszt, where “Die drei Zigeuner” became a hit in the programme. This was followed by one of the most rememberable hits from the carriere of Ms. Flagstad Isolde Liebestod, but for piano, in a version where Liszt has transsribed Richard Wagners beautiful music to a piano concert piece. Bengt Forsbergs intelligent and musically presentation, with a lot of feeling it was extraordinary, it became the highlight of the evening. It became a good Wagner “ouverture” for the following thre of the Wesendonck Lieder in the same atmosphaere.

Bjørn Simensen , The artistic director of the Kirsten Flagstad Festival welcomed to the concert and to the festival.

It became a memorable evening in the Hamar cathedral during the Kirsten Flagstad Festival 2012.