By Henning Høholt on 3/27/15 • Categorized as Classical music 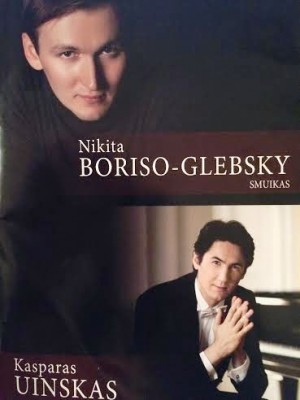 Wednesday 25th March they concerted in The Lithuanian Philharmonic Hall for a nearly full house, and the Lithuanian TV were present and taped the concert for later use.

It was a great evening. We have had the pleasure of following these two outstanding soloists when they guested Norway last season with concerts in Bærum Culture House (Oslo) and at Hamar in cooperation with the Kirsten Flagstad Festivals winterconcerts, with the same program. A program they also have presented touring in Brazil and at concert in Bruxelles. 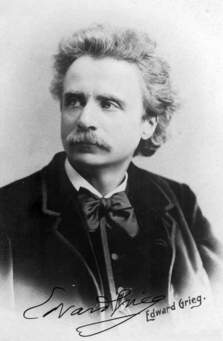 It opened brilliant with the famouse 3rd  Edvard Grieg Sonata in c-minor 0pus 45,

The first movement is characterized by its bold and heroic opening theme, which they performed so the audience could feel the Norwegian mountains, fjords, hills, waterfalls, sunshine, and or snowstorm in all its many different attitudes. The opening part is like entering a fjord from the westcoast, passing hills with gran and futu trees, and after a while getting in to a wider part of the fjord where the agitated opening theme is contrasted with a more lyrical secondary theme, where the tempi is slowing down, and the tunes can float wider. To a certain extent, Grieg built on Norwegian folk melodies and rhythms in this three-movement sonata.  The second movement opens with a serene piano solo in E major with a lyrical melodic line. In the middle section, Grieg uses a playful dance tune. The finale is written in sonata form with coda but it lacks a development section. During the way many deliciouse playing details, wellformed, well played. Composition of Grieg’s third and final violin sonata began in the autumn of 1886. Whereas the first two sonatas were written in a matter of weeks, this sonata took him several months to complete. The sonata remains the most popular of the three works, and has established itself in the standard repertoire. The work was also a personal favorite of Grieg. This was the last piece Grieg composed using sonata form.

Then the atmosphaere changed a lot to the younger Francis Poulenc and his Sonata FP 119. It’s hard to select the choicest treasures from this jewel box of Poulenc’s most witty and vivacious, hauntingly melodic and touchingly heartfelt music, especially when it is played with such effervescence and devotion as here. By these two wonderful artists formed brilliantly
. And where the audience who are used to Poulencs pieces used for ballet could feel the inspiration that a choreographer is getting to use this composers music also for demanding ballet steps, I have in mind his concerto for organ and Orchestra. But also reminds of his opera Les Dialogues des Carmelites
. Poulenc wrote his two string sonatas in wartime. The first, a Sonata for violin and piano, was begun in 1942, completed in 1943 and published in 1944, dedicated to the memory of the Spanish poet Federico Garcia Lorca (1899-1936) – a victim of the Spanish Civil War. It was first played in Paris on 21 June 1943 by the young Ginette Neveu and Poulenc. Between a ‘fiery’ Allegro and a ‘tragic’ Presto of Stravinskian parentage comes an Intermezzo evoking guitar music, with a lot of pizzicato details.

After the break we returned back in time the the oldest of the composers César Franck and his beautiful Sonata in A-major. It is one of his best-known compositions, perhaps together with his Panis Angelicus, and considered one of the finest sonatas for violin and piano ever written. It is an amalgam of his rich native harmonic language with the Classical traditions he valued highly, held together in a cyclic framework
. An interesting work starting with a 4 tunes thema, who is the appearing in different versions several times during the thre parts and also opening the last part in a new version.

This gentle and sweetly reflective rocking theme, introduced by the violin after a short introduction by the piano, is the thematic core of the entire work;  As with many other composers from that periode, Cézar Franck has learned that to get a tune wellknown, he needed to repeat the same theme several times, so the audience has a thema that they know to fall back to. The main melody is heard in canonic imitation between the instruments, and recurs in a rondo-like manner to a triumphant and soaring conclusion.

The piece is further notable for the difficulty of its piano part, as compared to most chamber repertoire; technical problems include frequent extreme extended figures – the composer himself having possessed very large hands – and virtuoso runs and leaps, particularly in the second movement. It seemed and sounded like that was not any problem for tonights pianist Kasparas Uinskas. The Franck Sonata regularly appears on concert programs and on recordings and is in the core repertoire of all major violinists, Jascha Heifetz played the Sonata in A at his final recital in 1972. What we heard at this concert was at that high level

The two artists replyed tha standing applause with first Johannes Brahms Hungarian Dance number one, and furthermore, as the applause wouldn´t stop.  A well known piece from a Lithuanian composer
.