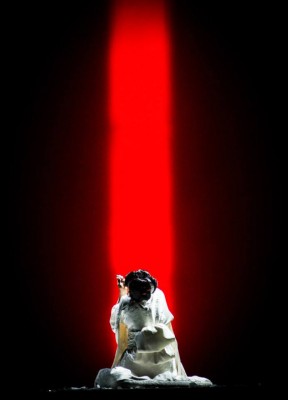 FIRENZE/ITALY: Puccini’s Madama Butterfly currently on stage in Florence had its main interest in having beloved (by the italian audiences) Fiorenza Cedolins as the protagonist. Unfortunately Mrs. Cedolins in these past few years has been experiencing rather significant vocal problems, but in this performance she depicted very well her character, identifying herself with such an important role, even if delineating it better interpretatively in its complex whole, than just vocally. Unfortunately Cedolins’ voice has lost in sheer beauty and its italian colour, loosing harmonics; moreover, she shows some problems in staying in tune in the upper register.
Nevertheless the singer delineates in the whole a compelling character, helped also by her interesting acting
. It’s a strange dichotomy between what she wants do and what her voice allows, but it gives us some moments of great theatre and of a great emotive intensity
.
Tenor Stefano Secco’s voice maybe does not possess a precious colour and timbre, but it’s well emitted

. He sings Pinkerton sure of his potentiality, in a generous way even if he isn’t helped by his scenic presence, above all because in this staging there was bariton Vincenzo Taormina (Sharpless), tall and imposing, so that Secco in some moments seemed his son not completely grown up…
Vincenzo Taormina as Sharpless didn’t show particular gifts neither vocal nor interpretative, while Enkelejda Shkosa was a very good, and vocally rich, Suzuki.

Roberto Covatta as the pimp Goro, was of average level (specially if we think to what other singers take out from this character. the other singers were really poor.
Young conductor Juraj Valčuha was very careful in rendering the theatrality of the score and to its relationship to the stage, he gives a large and rather unusual symphonic breath to each page of the score where the orchestra is the protagonist. His accompanyment to the voices is really good, and he has a great mastery of the orchestra, actually his artistic career began as a symphonic conductor, but I think that in the future he shall be a good conductor also in opera repertoire.
Maggio Musicale Fiorentino Orchestra was in a really good shape, and the Chorus, which is going through a very good time conducted by Lorenzo Fratini, was excellent
.
Stage director Fabio Ceresa is author of a minimalist but not poor staging
. The characters are well depicted, so their acting. He keeps out almost at all Japaneserie and excites the conflict among the characters. Not every idea is original at all, such as the marriage of Butterfly and Pinkerton celebrated not signing the logbook but drinking from the same bowl, and there are also some rather stupid ideas, such as Pinkerton’s arrival on stage (surely a Butterfly’s dream) during the Humming chorus. But globally it was a rather accurate setting.
The costumes were hardly normal, except Butterfly’s lavish gown in First act. As said, the scenes were almost not-existent: just an evocation of a Japanese traditional temple’s silhouette in First act, some vertical lacque components (almost stylized bamboo canes) in Second act, and only a wood floor when the characters act in the Third act.
Obviously a minimalist scene needs an adequate light designing, so a big veil on the background was illuminated with various colours. In some moments this was really excessive, and the changing of colour, even with very violent strong colours, were too frequent and distracted from the acting and singing on stage.
The success was very warm from the audience that filled Teatro Comunale.

Please enjoy our review of Stefano Secc as Rodolphe in La Boheme at Opera Bastille, Paris at: http://www.kulturkompasset.com/2009/11/starcast-in-la-boheme-at-bastille/