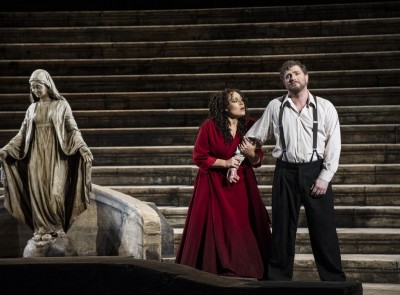 OSLO: Cavalleria Rusticana and Pagliacci was premiered at the Norwegian National Opera in Oslo Saturday evening. This is a coproduction with The  Royal Opera in Copenhagen, regi by Kasper Holten (Cavalleria) and Paul Curran (I Pagliacci).

The two regisseurs are giving the audience real old fashion opera, beautiful staging, scenography, goodncostumes, outstanding singers choir, and a very good childrens choir, leaded by Edle Stray-Pedersen, which in Cavalleria only is heard of stage, but in Pagliacci is acting  live on stage 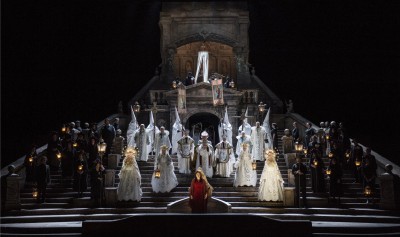 A good sounding orchestra conducted by Daniele Calligari. Spite in that it sounded sometimes like he was not giving too clear signals, so the groups musicians was not allways exactly together. He has the real italian feeling for the two composers, and know how he want it to sound. I expect that after a few performances, these small, but musically importent details will be better.  Catharina Chen is concert master.

Eva-Maria Melbye is responsable for the regi of the production, assisted by Hilde Andersen. 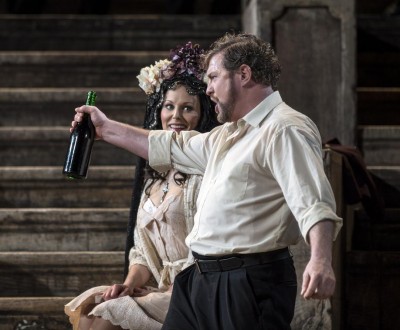 With Tuija Knihtila as Santuzza, Henrik Engelsviken as Turiddu and Yngve André Sjøberg as Alfio, the production has a star cast of high international dimension, even better then the star cast at Opera Bastille last season, headed by Violeta Urmana as Santuzza.

Tuija Knihtila was outstanding as Santuzza, beautiful on stage,  well sounding in all the register, and when she has the most powerful orchestra and choir behind her, her tune is still heard on top of it whole. Her aria “Voi lo Sapete” was brilliant.

Henrik Engelsviken as Turiddu was extraordinary, he is of international standard, and we can only be happ that he likes to be in Oslo, because this kind of tenor is of the quality that is being missed every where. His aria to his  mother “Mamma”  was wonderful.

• During the past month, have you often been cheap viagra – vascular bypass surgery. 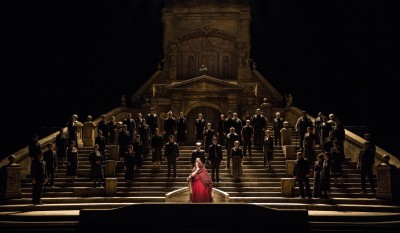 Santuzza: Tuija Knihtilä, and the choire

Lola was beautiful sung and presented by Ingeborg Gillebo,  who in  the second part unfortunately had got a scilly comical dress, with a strange hair/hat construction. I suppose it was the wish that she should look rich, but it  became rather strange
. Mamma Lucia was very well taken care of by Tone Kruse, who has the autority that this role needs.

I was impressed by the choire sound, it is outstanding, what a quality, beautiful.Choire master David Maiwald.

Tone Kummervold is alternating in the small, but importent role as Lola, she had her first evening Monday Mars 4th. She played the role well.  She gave the role her personal profile. 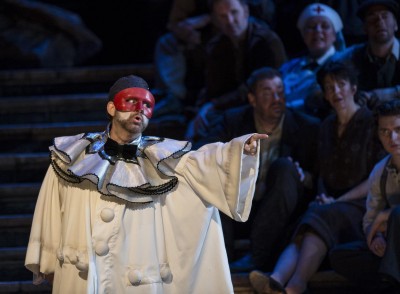 The casting is in the best hands, the American tenor Roy Cornelius Smith makes a good charactere of the jalouse Canio, that he sings wonderful. Marita Sølberg is singing Nedda, a soprano role, that we have long tradition with outstanding soloists in at the Norwegian National Opera, my first Nedda was Mirjana Dancuo, that i stille remember.  Marita Sølberg is following well in this great tradition. Her love duet with Espen Langvik was brilliant. Ole Jørgen Kristiansen is brilliant as Tonio, the other jaslouse personality in this opera, and we all understand why Nedda is falling in love with Silvio – Espen Langvik
. Handsome, well singing, a young contrast to the others. 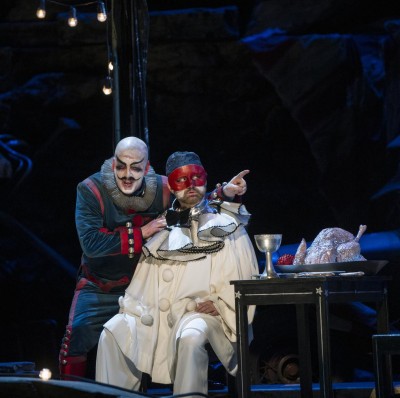 Another plesant meeting is the new tenor in the company, Marius Roth Christensen, who is the young Harlekin Beppo. In fact for him, who is so young and delicate, the costume was too heavy, he could have had a type of a ballet Harlekin costume, that would have fitted him well. Of course i do notice that his costume is in the same field as the others, but when the operahouse has a handsome slim tenor in that role the costume could have been changed a bit.

Marita Sølbergs performance costume, reminding me of Moulin Rouge and Folies Bergere in Paris, was good for her, it was elegant and underlined her role well.

Helge Rønning is alternating in the role as Beppo/Harlekin. In the beginning he was a bit anonyme, but when he came to the Harlekin part it started very well, and after the opening small romance he became very good in the duet, with Nedda/Colunbine.

The well functioning scenography forbost of the productions are by Mia Stensgaard, the first one for Cavalleria Rusticana, with a church on top of a wide staircase, where all the drama is going on functions perfect, and the big choire scene with the priest, and all the religiouse show is a hit, based on the wonderful choire sound. 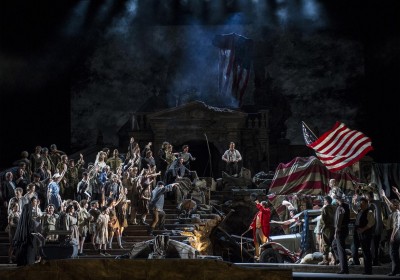 Cavalleria Rusticana is performed in the time when it was composed 1890, whle Pagliacci elegantly is moved up to 1945, just after the second world war, and in this the scenographic basic is the same, but in the meantime there has come some bombs and this has, of course changed the scenographuic idea, very well made, we feel we are the same place in the first and the second opera, only 60 years later. this is followe dwell up in the costumes by Anja Vang Kragh, and deliciouse light by Bruno Poet.