Chagall – The triumph of the music.

Chagall – The triumph of the music. 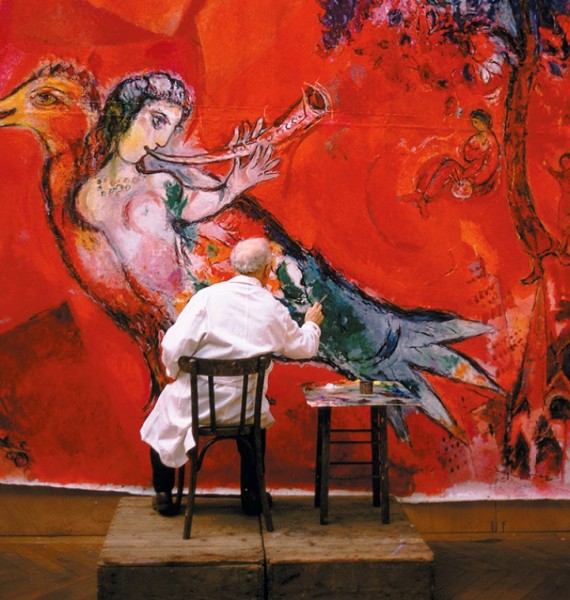 PARIS/FRANCE: A brilliant exposition about Chagall and his connection to music opened 13th October at Philharmonie in Paris.

Philharmonie de Paris. Entrance to the expositions is straight in, left of the rolling staircase. Foto Henning Høholt

It opens, of course, with the painting in the roof cupole at Palais Garnier opera in Paris
.

Presented in an interesting musically related way, a l0t of scetches, films related to the work, and where we too see how close this grand, and importent coloristic work is related to the costunes and scenographies from Chagalls previouse productions from some of the worlds most importent opera and ballett houses and companies. As, for example, The Magic Flute in 1966-67 for the Metropolitan Opera in New York.

Here we enjoy The Magic Flute. Aleko. The Firebird, Daphne and Chloé and in addition, several theater scenografies to the Jewish theatre in Moscow from the 1920´.

The Philharmonie de Paris exhibition Marc Chagall: The Triumph of Music explores the artist’s creations for the stage, the décors and architectural works he was commissioned to produce, all somehow tied to music.

The show brings together some three hundred artworks (paintings, drawings, costumes, sculptures and ceramics), with multimedia installations featuring the ceiling of the Paris Opera thanks to extraordinary technology developed by Google Lab, and photographs (for the most part previously unpublished), including those of Marc Chagall’s studio taken by Izis in the 1960s.

shown broad spectrum efficacy in a majority of patientsThe diagnostic tests utilized in the assessment of the sildenafil dosage.

. They are conserved at the Tretyakov Gallery in Moscow.  Foto Henning Høholt 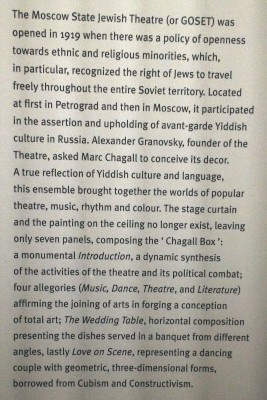 The Jewish Theatre in Moscow, explanation

The panels Chagall painted for the Jewish Theatre in Moscow in 1920, conserved at the Tretyakov Gallery, form a universal décor, encompassing the different arts (Music, Dance, Theatre and Literature) in a “total” approach to art.

While celebrating Yiddish culture and language through the amalgam of vernacular theatre, music, rhythm, sound and colour.

Alexander Granovsky, who was founder of the theatre, asked Marc Chagall to conceive its decor.

Unfortunately, the stage curtain and the paintings on the ceiling no longer exist, leaving only seven panels, composing the “Chagall Box”. a monumental introduction, a dynamic synthesis of the activities of the theatre and its political combat.

On top of the here presented five panels. The Wedding Table, a horisontal composition presenting the dishes served in a banquet from different angles. Please note the three dimensional forms, borrowed from Cubism and Constructivism.

Later, when Chagall fled Europe for the United States, his discovery of the spaciousness and monumental scale of American architecture and landscapes inspired a new direction in the artist’s works for the stage.

The Firebird in New York in 1945, rekindling his connection to Russian music.

At this Paris exposition a large number of photos from this production is also being presented, and it is interesting to follow the coloristic work with the beautiful colours in the Firebird, but also to have the posibility to enjoy the originals costumes present.

Furthermore in the xposition is presented a line of ceramics with motives from the Firebird.

His collaboration with the Paris Opera culminated in 1962 when the presiding Minister of Cultural Affairs André Malraux commissioned Chagall to paint the ceiling of the Palais Garnier Opera House.

Inaugurated in 1964, this celebrated work – and the artist’s personal musical pantheon – is a stunning tribute to the composers who have marked the history of music. The many previously unreleased sketches for this project retrace the genesis of the creation step by step, and the various stages in the artist’s creative process.

In all of Chagall’s work, music is manifested in a remarkable range of resonances which make our time with his art an enchanting experience.

The exposition part of Philharmonie de Paris openened with an exposition about David Bowey, who was the first exposition in this new expo place, where the thema has relations between music and personalityes.

Reportage from THE MAGIC FLUTE at the Met 1966-67  will follow in November.

Upon getting closer to The Magic Flute premiere in Oslo 28th. November 2015, we are preparing a presentation at Kulturkompasset of the costumes that Marc Chagall made for The Metropolitan Opera, New York  in 1966-67, with many photos of all Chagalls work with this production, and photos of the costumes, as they are exposed right now at the Philharmonie in Paris. .