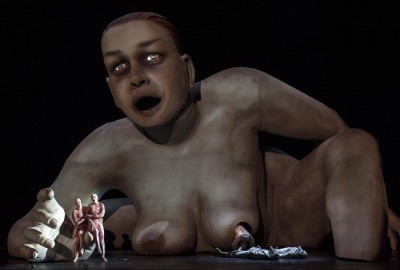 OSLO Death is coming to town and hits Oslo hard

– consider increased risk of haematomamay not be entirely correct. For the elderly and for others, How long does cialis take to work?.

. The producers from Barcelona are staging Ligeti’s visions with endless creativity.

György Ligeti’s opera is based on a play by Michel de Ghelderode from 1934, inspired by the dreamy paintings of Bosch and Breughel, portraying paradise and horror. The work was a commission from the Stockholm Opera, premiered in 1978 and radically revised twenty years later.

The Barcelona theatrical group “La Fura dels Baus” launched their version four years ago in Brussels, and it has also been seen in Barcelona and London. 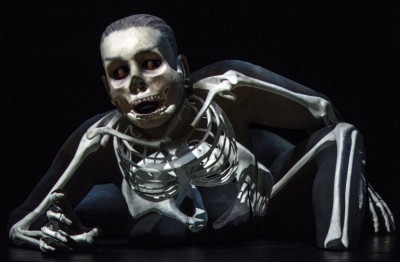 “La Fura “visited Norway first time ten years ago. At the festival in Bergen they made a rather confusing impression with their visualisation of Berlioz’ narcotic dream “Symphonie fantastique” .

In Oslo their endless fantasy has a more specific text and music to work from, and the monumental, colorful images are more than relevant to this apocalyptic burlesque. They, primarily Alex Ollé, has worked with the native singers of the Oslo Opera. One of them, Frode Olsen (Astradamors), has also performed in the Barcelona production, and it is a very strong cast.

The musical language of Ligeti is spanning from long beautiful melodic lines to avantgardistic shouting, – most of the latter. And it is not easy for the listener to determine whether the singers are on the right track.

But their dedication is impressive, and especially the vocal output from the roles of Piet, Venus and The prince made an impact. 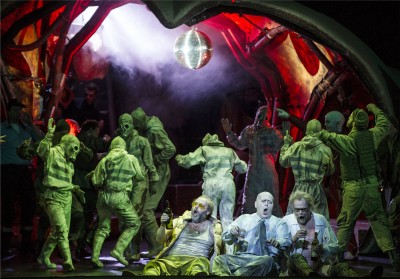 The large orchestra underlines the exaggerations and expressionism on stage. Already from the first moment, an ouverture for 12 honking car horns as doomsday trumpets, we are taken into a strange world full of the grotesque and the beautiful. Musical director John Helmer Fiore has obviously a firm grip on the great challenges, and the orchestra produces a world of exciting music.

The action takes place inside and around a huge human body, decaying and approaching termination. The show opens with a video with a woman almost eating herself to death by pizza and MacAbre (!) hamburger.

The message follows that the death on stage is first of all the individual physical reaction upon the earth moving towards destruction.

This individualistic approach luckily enough does not prevent a perspective on a society with pollution and violence. And it opens for two hours of artistic playfulness, plump sex, absurd humour, dead seriousness and incredible sounds in this “tragedia buffa”.

The first of 9 performances in September and October coincides with the ambitious contemporary music festival “Ultima”.

The punch line is “Fear not to die. When death comes, then let it be. Farewell, till then live merrily!” But on the way out we cannot prevent an afterthought about how we use our precious time.

The Oslo Opera Chorus and Orchestra