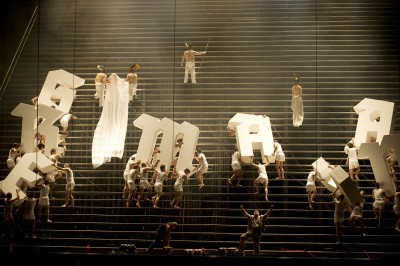 Since it is Wagner, – and Verdi jubilée, year in 2013, Opera de Paris is celebrating this. Right now the Ring des Niebelungen, conducted by the Music Director, Philippe Jordan, has started at Opera Bastille, first out is Das Rheingold, follwed by Die Wälkure next week, the Siegfried, and Götterdämmerung. Furthermore in the summer one complete Ring 18. 19. 23 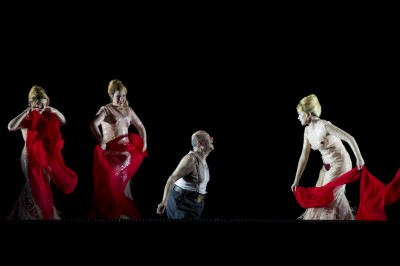 PARIS: Das Rheingold at Opera de Paris, is presented in a moderne way, with an easy to follow history, which is a good opening for the basic in the history. sung in German, texted in French and English, very well made. The stage director, Günter Krämer, is trying to make the amusing parts more funny, especially by letting Mime playing a funny character, which functions very well,  brilliant performed and sung by the character tenor Wolfgang Ablinger-Sperrhacke. He is closely following up Alberich´s excellent charactere Peter Sidhom, so that these two are having a lot of action going on between them, it works well, and they are good singers and actors. 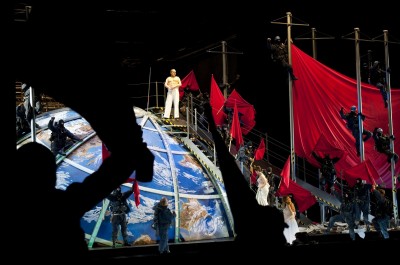 The libretto recounts the world before men, a world where Gods, Giants and Nibelungen, – the forced laborers from the bowl of the earth, fight in a perpetual yet futile struggle for power. It is also a world that depicts Nature at the exact moment of the corruption, when the gold, lying on the riverbed under the guard of the Rheinmaidens, is stolen by the dwarf Alberich, Peter Sidhom, to forge a ring that gives power. 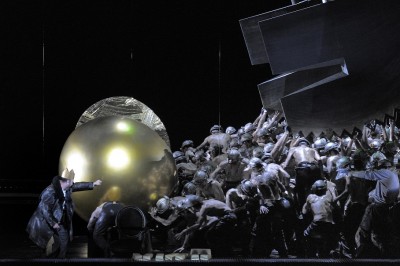 The performance is, as the music builds up to four different parts and pictures. They are very variated, and are in the beginning telling nearly each their own history. But after a while we find out that this is as pictures in a fairytale book, where the idea is to give us different up to date impressions, without losing the history, and the idea of it. 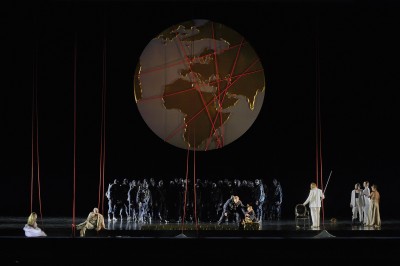 The first picture is (of course) on the banks of the Rhine river, with the Rhine Maidens joyfully and happy swaying under the water, with 98 red fishes swimming around, – later on I found out it was the hands of the invisible 49 statists, dress in black, so you don’t see them because of the good lighting. Well sung and performed by CAROLINE STEIN Woglinde, LOUISE CALLINAN Wellgunde and WIEBKE LEHMKUHL Flosshilde. Their costumes, which are elegant flesh-colored glittering evening dresses, with details so that this effect results as if they are naked. When Mime, Wolfgang Ablinger-Sperrhacke, later taking on the same kind of dress is this amusing and underlines his show figure. In this connecting working well in the performance. 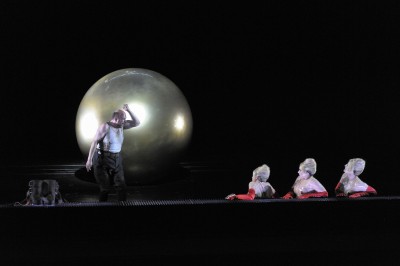 Wotan is sung by the good Latvian baryton, Egil Silins, in fact he “looks” like a young handsome Wotan, is a good choise for the role, and he sings splendid, and with a good charactere in his voice. He is sharing the role of Wotan with Thomas Johannes Meyer.

As the two leading wimen, Fricka is splendid sung by Sophie Kock, and the sister Freia by Edith Haller
.

And as Erda QIU LIN ZHANG.  SAMUEL YOUN sings Donner and the young BERNARD RICHTER is very good as Froh. Furthermore LARS WOLDT is making his debut as Opera de Paris as Fasolt, while GÜNTHER GROISSBÖCK sings Fafner. In the costumes, FALK BAUER, has given Fafner and Fasolt military fighting uniforms, together with all their staff. I don´t really understand why, but it functions well in the whole, so “Why not?”. JÜRGEN BÄCKMANN Scenography works well, with large dimensions on every thing, and it is bringing the play closer up to our time, and also brining a world aspect in to the performance, which will be followed up in the whole Ring production, as we have reviewed earlyer. Which makes this Ring production special. 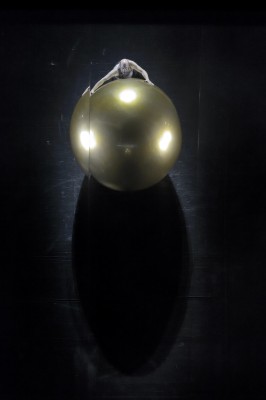 GÜNTER KRÄMER´s stage direction functions well. I like that he is having eyas for also the amusing details, which in fact this production is full of.

He has completed a private person instruction, which helps the different persons well to emphasize their characters, and for example in the scene in a cave in the depths of the earth, where Alberich holds the Nibelungen in slavery, this is choreographed well, choreography by OTTO PICHLER that all statists moves in step with the machinery. An other detail, several places huge movable mirrors walls are caregiver to give others access to the public, and also to double activity and groups, very effective. Good light by DIEGO LEETZ.

In the very last Picture when entering the Castle up the very bug staircase, the 49 male statists dressed up (white boxer shorts and t-shirts, like we are in the OL in 1936 in Berlin carries up the staircase the word GERMANY in single letters. Effectfull.

Last, but not least, The Orchestra at the Paris Opera plays brilliant, during the leadership of the musicshief PHILIPPE JORDAN. We noticed it when The Nibelungen Ring was premiered three years ago, and he still has the safe hand on it, and has developed in the way that, for me, the many importent musical details, which has to do with the musically forming of the characters in the whole story, are sounding even more clear. 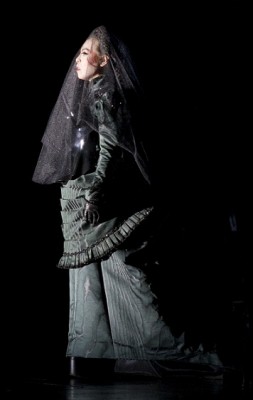 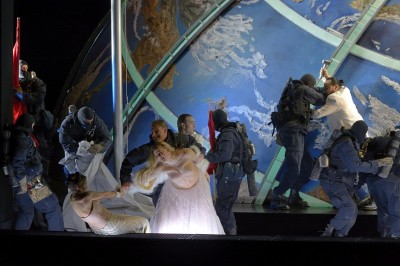 Please enjoy our review from the 2010 premiere of this production at: http://www.kulturkompasset.com/2010/04/rheingold-at-bastille/