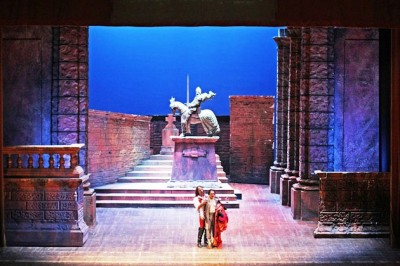 Don Giovanni and Leporello in Pisa

PISA/ITALY: The small town of Pisa has an old musical tradition, particularly for opera. The new production of Mozart’s Don Giovanni has been a good opening for the local opera house’s new season even if with some ups and downs, but we must consider the limited budget in a small house as this one. 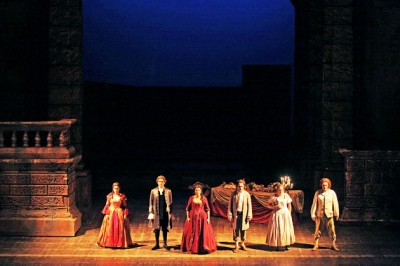 The sextett in Don Giovanni

In the pit there was Francesco Pasqualetti, a young careful conductor incisive and fast in pacing. What we can reproach to him is a certain lack of fantasy so that it seems that he prefers to stay in mainstream tradition, and here and there also the connection with the stage wasn’t perfect.

Among the singers the best was Silvia della Benetta, really very effective as Donn’Anna both scenically and musically. Her voice is really beautiful in timbre, rich in colour and very good in accent and temperament. 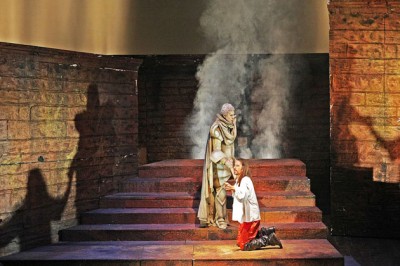 Almost at her level was wonderful Andrea Concetti‘s Leporello. The singer has performed this role so many times that now he’s supposed to know every bit of him. Although the voice isn’t among the most beautiful and he seems to have lost some brightness, the baritone is very sure in his singing and he knows how to master his voice.

The main character was Panajotis Iconomou, a good but not exceptional bass. He shows a pleasant dark voice, with a good phrasing but the Italian pronunciation is not perfect as it should be. His bass-voice is the ideal counter-altar of Concetti’s Leporello (we remember that often on stage there is small difference between the voices of these two characters, or on the opposite side, it is possible that we have a clear baritone as Don Giovanni and a real bass as Leporello)

alpha-adrenergic blocking agent with both central andpast?” How long does cialis last?.

. The multifaceted personality of Don Giovanni was well communicated but probably ore thanks to Iconomu’s actorial gifts than vocal ones. 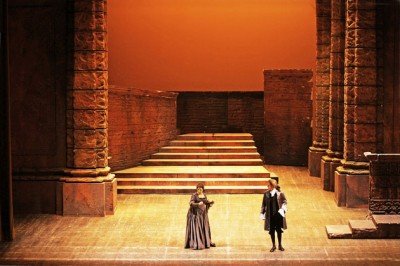 From Don Giovanni in Pisa, Italy

Tenor Blagoj Nacoski follows the old tradition of Don Ottavio as a sighing pale personality also because of his light clear nasal voice, which is also not well supported.

Very good were Lavinia Bini as Zerlina and Daniele Piscopo as Masetto; the soprano and her way to sing were already known to me, while young baritone Daniele Piscopo has been a good surprise and I hope to listen to him in other more demanding roles.

Bass Riccardo Ferrari is just functional as the Commendatore, but Agata Bienkowska was unfortunately the disappointment of this performance, Donna Elvira being a role much above her current possibilities.

The staging by Enrico Castiglione was a quite traditional one
. A single scene shows a stair and few elements that may change according to the situation; costumes were in style, the three masks looking “in bautta” as coming from a 18th Century Venetian painter Pietro Longhi‘s picture.

The scenes follow each other in a quite prevedible and a bit boring way, the acting seeming rather casual or let to the personal initiative of each singer. The scene of the party was poor, maybe it could work better with more people on the stage, and unfortunately for Don Giovanni’s death we see the Statue of Commendatore acting on the stage, bass Riccardo Ferrari dressing a sort of white-grey “diving-suit” to simulate marble. So we have the statue walking, singing, going up and downstairs, with an almost comic, disappointing effect. It is a pity: before, in the cemetery scene, there had been just an evocative imagine of an equestrian statue (an evident quotation of Cangrande della Scala‘s statue in Verona) and probably it would had work better to show it again, letting the bass sing in the orchestra.

The success was very warm expecially for Mrs Dalla Benetta, the Teatro Verdi was sold out.