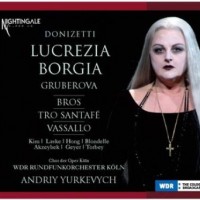 First of all, we have to struggle with the cover before opening the box of  Nightingale Classics: Morticia of  The Addams Family, gone old and white, would leave us astonished, almost scared (it’s a theatrical production of some years ago, but wasn’t there a nicer photo of Gruverova available?).

This recording of Lucrezia Borgia, one of the most beautiful and important operas by Gaetano Donizetti and apotheosis of  “Italian Belcanto” took place live during some performances in Köln in June 2010, and undoubtedly can arouse curiosity of the many and enthusiastic supporters of  the singer.

Edita Gruberova was 64 at the time of the recording in 2010. Her performance in this opera takes place about 42 years of  her vocal career, a long and vocally tiring one. The character of Lucrezia Borgia is performed by her after a lot of very difficult roles such a Violetta, Norma, Zerbinetta, Elvira, Lucia di Lammermor,Olympia and many others.

Gruberova has an amazing vocal technique and her surprising ability to reach the upper notes is almost legendary. The choices of  her repertoire prove that, when she sings ruthless roles, vocally difficult to be performed. Yet even many of the Donizetti roles that she sang in her golden years of her artistic career looked a little forced for her, and she tried to resolve the difficulties by her excellent technique, sometimes staying on the surface of the character, not going “into” it  in the dramatic sense. This characteristic is quite understandable for a great singer with her vocal peculiarities, as it happens to many singers with a naturally “beautiful” voice, or with a perfect technique, who stay on the mere surface of the character they sing.

There is no doubt that a strong character such as Lucrezia Borgia (a mother, a poisoner,a woman in love, a highly tragic character) is offered to her too late in her career, because her voice is tired and unequal, her imperfections are now more evident and many of  her skills are now lost.

how would generic viagra online for sale million men aged 40 and above (5) ..

. We find more the lyric, trembling aspect, where Gruberova takes advantage from her mannered inexpressivity, neglecting with nonchalance the deadful side of the protagonist. Never a clear-cut accent to give theatrical and expressive evidence to Pope’s daughter (no need to remember that Lucrezia Borgia is a real character, she lived in 1500s Italy, illegitimate daughter of  Pope Alexander VI, Rodrigo Borgia,  and of his lover Vannozza Cattanei).

Moreover Gruberova’s Italian pronounciation is very questionable and often incomprehensible for an Italian audience, so much that sometimes we wonder whether she really understands what she is singing.

José Bros, the tenor in Gennaro’s role, sings correctly although in a ordinary and inexpressive way. He also sings the additional aria T’amo qual s’ama un angelo
. His voice is too light to capture this particular pre-romantic character, despite he manages to use the high register. For example, the wonderful page Di pescatore ignobile goes almost unnoticed, the phrasing is monotonous and on the whole we get no emotions from his performance.

Silvia Tro Santafè, as Maffio Orsini, has a too evident vibrato, and her performance is not first class. Phrasing is neglected, coloratura is sometimes difficult and the character is not well sketched.

Franco Vassallo is a reliable Don Alfonso, although not very personal and refined. All the minor characters are rather mediocre.

Andriy Yurkevych’s conduction does not make a great impact, he simply accompanies the singers as they expect from him, and he seems to conduct without a general idea of the opera, but he goes though page after page.

The Orchestra follows him with a good sound, not quite the same the Chorus.

On the whole it’s a CD built around the protagonist, following some theatrical performances in Köln in 2010. Gruberova is also the owner of  Nightingale Classics. But a live performance may have some atmosphere, what not always derives from recordings such as this one. However previous older recordings of this opera are of a great beauty and importance. This seems to be a commercial product aimed to show Gruberova’s performance, and adds nothing to this beautiful opera by Donizetti.

The recording is technically very good, box with no libretto. On the booklet, the introduction is in English and German.
Fabio Bardelli