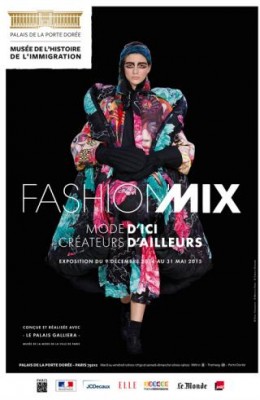 PARIS/FRANCE: Between personal routes and history of fashion, Fashion Mix tells another story of immigration, those men and women, artisans, designers, contributing to the reputation of Paris, the international capital of fashion.

PARIS/FRANCE: Paris strongly keeps its position as the capital of fashion. – still that some other cityes does their best trying to mark their own importence. The fact is that it all started in Paris, and from Paris it developed, but as the fashion is internationally, so are the designers who have made Paris the capital of fashion and couture.

In the international field Paris fashion museum, usually with its home at Palais Galliera, right now are presenting a large and interesting exposition at the Immigrant museum, The Porte Doree Museum, a beatiful house, where also museum of immigrants, and the Aquarium is situated. Furthermore situated in the same area a ZOO and across the street from the museum is the entrance to the Vincennes forest.

Inspiration and a fantastic handwork for someone, Too much for others
. From the Fashion Mix exposition in Paris. Foto: Henning Høholt

This actual couture exposition, female, is underling and presenting how importent and influential the foreign designers has been to the French Fashion, how many inspirations that they have brought with them.

However it too shows that Paris. the most international capital in Europe, has opened up, and given the couture and fashion business the posibility to work and develope talented dedigners through the wellorganized, but also, not at least to foreigners, complicated organisations and systems.

In this exposition it all starts with the famouse designer Charles Frederich Worth (Great Britain):

Fashion and Immigration: Charles Frederick Worth

Charles Frederick Worth was born in England in 1825. First apprenticed to drapers and silk merchants in London, he decided in 1845 to move to Paris, attracted by the city tailors and expertise of artisans. 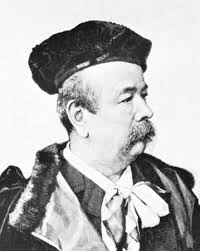 Hired by the famous haberdasher Gagelin he sells fabrics, shawls and cloaks made. Soon, he offers customized dresses. In April, 1858, Charles Frederick Worth opened with its Swedish partner Otto Gustave Bobergh his own couture house.

It lays the foundation for what will become high fashion offering its clients dresses “willing to try” presented by live models. The collections are constantly changing, opening the cycle of fashion.

and is including interesting designs by very many famouse names, but also presenting designs, scets, drawings, factor information about names, who some never have heard about, or, still they were really big names when they were actually working and presenting their lines in Paris, nearly has been forgotten by the “normal” audience. 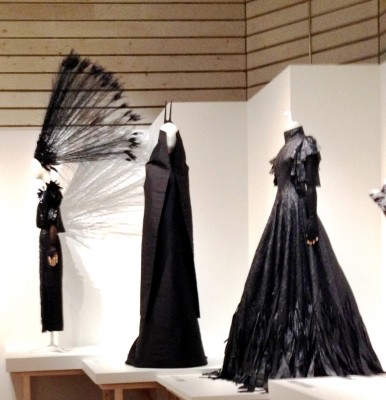 Among the really big names are Sciaparelli (Italy), Balenciaga (Spain), Yamamoto and Kenzo (Japan).
Even in the listing, but without outfits presented at this exposition, two Norwegian names Peer Spook and Peter Dundas.

While i was missing outfits from the famouse Danish designer Erik Mortensen, from Frederikshavn, who was the big name by Pierre Balmain, through decades.

The young Lithuanian/Norwegian designer, Tomas Bagackas, who presented his first fashion show, female and male in Paris, the autumn 2013, is also still not registrated in this connection, but that is only a matter of time.

The concepts of “French know-how” and “made in France” are recognized and celebrated internationally in the field of fashion since the mid-nineteenth century.

But this French fashion is often designed by foreign designers.

Driven by political or artistic reasons choice, attracted by the capital of culture and elegance but also by the country of freedoms, these foreign designers contribute to the reputation of haute couture and ready-to-wear french and, in Paris, the international capital of fashion.

But fashion is also of specific skills.

The exhibition evokes certain trades of the time particularly marked by immigration as the workshops of Russian embroidery in the 1920s or, more recently, loop-Shoes and Armenian.

Big variations from folclorisme to elegance, from sporty to stylish at Fashion Mix at Musée Porte Dorée. Foto Henning Høholt

The exhibition presents a hundred iconic pieces mainly preserved at the Palais Galliera, Fashion Museum of the City of Paris: dresses, coats, hats, accessories … Individual migration routes and know-how are tracked through documents from private and public archives: acts of fashion house creative, naturalization records, records of the french Office for the protection of Refugees and stateless Persons (OFPRA), extracts and audio interviews … police station.

Yamamoto, detail from an outfit. with shadow. Foto Henning Høholt

The exposition at Museum Porte Dorée is presented through the spring, last day is 31th May 2015.

The Palais de la Porte Dorée is an exhibit hall located on the edge of the Bois de Vincennes at 293, avenue Daumesnil, 12th arrondissement of Paris, France. It now houses the Cité nationale de l’histoire de l’immigration, as well as a tropical aquarium in its cellar.

The building was constructed for the Paris Colonial Exposition of 1931 to designs by French architect Albert Laprade, Léon Jaussely and Léon Bazin. It provides 16,000 m² of exhibition and office space. External bas-reliefs(1200 m²) by sculptor Alfred Janniot portray ships, oceans, and wildlife including antelopes, elephants, zebras, and snakes.

The Palais de la Porte Dorée has housed a succession of ethnological museums, starting with the colonial exhibition of 1931, which was renamed in 1935 the Musée de la France d’Outre-mer, then in 1960 the Musée des Arts africains et océaniens, and finally in 1990 the Musée national des Arts d’Afrique et d’Océanie. In 2003 these collections were merged into the Musée du quai Branly, and in its place the building now houses the Cité nationale de l’histoire de l’immigration.

The building’s cellar is home to the Dorée Tropical Aquarium, which contains about 5,000 animals representing 350 species in a variety of tanks ranging from 100 to 37,000 liters in size