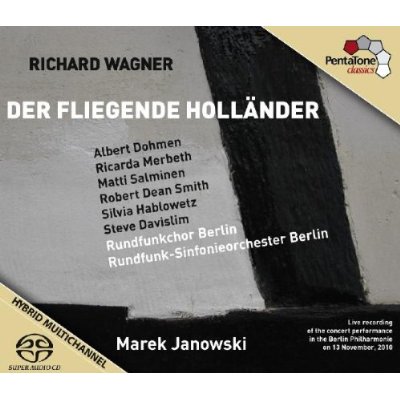 Flying Dutchman is not only one of Richard Wagner‘s first operas, but indeed one of his most extraordinary. Its première was in Dresden in 1843, and many are  the peculiarities that make this work an absolute masterwork: the fact that it’s inspired to Nordic folkloristic legends, the eternal subtile fascination of the sea, its many facets and the anticipations of Wagner’s maturity, everything gives charm and a strong impact to this opera, one of my favourites among Wagner’s

A number of survey on attitudes to ED have been reported.equally sildenafil dosage.

Marek Janowski  was appointed in 2002  “life conductor” of the Rundfunk-Sinfonieorchester Berlin, and with this opera he starts the project to perform live ten Wagner’s operas, which will all be released on SACD by Pentatone. The project will end in 2013, the 200th anniversary of Wagner’s birth.

Intents are praiseworthy, but with Wagner, references in recordings are so many. Almost all the historic conductors had to deal with his operas; nevertheless also new recordings must be considered, listened to and reviewed without prejudices
.

Perhaps to discuss of a Janowski’s “Wagner concept” may be excessive. He is a skilled conductor, with good experience, efficient, but he doesn’t achieve a  personal reading of the score
. He knows well when he must give fire to the orchestra, or when the spell of the different colours must come out, and  he knows how to set the best background to accompany the voices, but he doesn’t go much further
. In the whole, he’s a good conductor but without a great personality.

German bass-baritone Albert Dohmen has built his career specially on Wagner; here, he’s the Dutchman. He’s young enough, being born in 1956: unfortunately his voice has lost in brilliance and overtones. He often encounters difficulties (which he tries to hide as best as he can), specially when he climbs on high notes or when he must hold long musical phrases
. In the whole he depicts his character’s many facets, but it’s not a memorable performance. Being the protagonist, it was obvious for us to expect more either on vocal and in dramatic terms.

Senta is Ricarda Merbeth, a German soprano whose voice has no special charm, sometimes showing an annoying vibrato. She’s inconstant in her rendition, and we can say that unfortunately she doesn’t impress much.

At the time of the recording, Matti Salminen, bass, was 65 years old. His voice was certainly neither intact nor firm, but he gets off thanks to his experience, having sung Daland so many times. Here, from time to time, we find his emphasized, stressed phrasing, but the voice is too worn out, and vocal troubles emerge right from the first scene.

Wagner has entrusted Erik with some wonderful moments, and Robert Dean Smith sings the part bravely.  He has a firm voice but, with a certain monotony in his singing, he’s unable to give personality to the role.

With his fresh voice, the young tenor Steve Davislim is a perfect fit for the Steuermann, a small but highly demanding  part.  Silvia Hablowetz is an average Mary.

The Rundfunk-Sinfonieorchester Berlin is not less excellent than the Rundfunkchor Berlin, which has a lot to do in this opera.

As said, all Wagner’s operas conducted by Janowski will be released on SACD through 2013. We consider this a challenging but insidious task.  As a matter of fact, to release on SACD a performance such as this one that took place at the Berlin Philharmonie on November 13th 2010, is both a merit and a risk: a merit because the spontanity and truthfulness of the performance should be out of discussion (even if it’s easy to think that in the editing work something may have been adjusted); a risk, or perhaps simply a limit, in as much it perpetuates a performance that has its raison d’être and a principal reason in its hic et nunc.  There cannot be further analysis, because the production is linked with a performance, with the cast available in that very moment, that very day; and – with all the due respect for the singers of this Pentatone release – without true “sacred monsters” justifying its existence.

In the whole among all  the Flying Dutchman‘s recordings, this one is a medium level one, considering how many (and which) great conductors in the past tackled this opera.

The sound of this SACD is definiitely wonderful, booklet and graphic are elegant and very rich in information, the libretto is in German/English, with essays in German, English and French.

(live recording of the concert performance in the Berlin Philharmonie on 13 November, 2010)