By Christophe de Jouvancourt on 1/24/12 • Categorized as Ballet 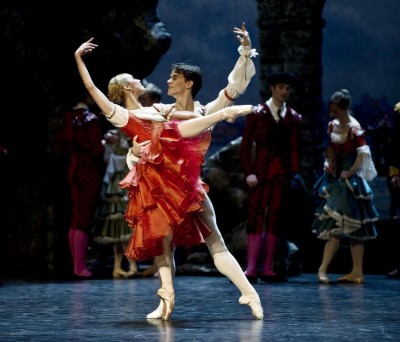 PARIS: The 14th edition of the “Gala des Etoiles du 21ème siècle”, exceptionally organized in January this season, confirmed the show as a “must be seen”, for anyone who likes ballet. Despite the absence of Lucia Lacarra and Cyril Pierre, who were sick, and of the “star” of the evening, Daniil Simkin who was injuried the first evening after his performance, unfortunately – we wish them a good and quick restoring – the program was very rich. The dancers came from all around the world and were all very good.

Among the classical extracts, Aleszjia Popova and Maté Bákó, both from Hungaria, opened the show with a pas-de-deux from Le Corsaire, but the performance was quite disappointing. The girl hasn’t beautiful feet and neither she nor the boy was really into it.

Then, the Golden Idol, from La Bayadère, was performed very nicely by Davit Galstyan, an Armenian dancer, recently hired at the Ballet du
Capitole in Toulouse (France). He has a very good elevation and a lot of density in his dance. Galstyan performed also the variation of Les Bourgeois, on the song of Jacques Brel, which became famous with the interpretation of Daniil Simkin. The Galstyan’s performance is honorable but suffers from the comparison with the American Ballet Theater’s young miracle. One could also see the pas-de-deux from Don Quixote, danced by Lali Kandelaki and Vasil Akhmetel, both from Georgia. They were very good and the girl was brilliant during her “fouettés”, even if it was a little too much for the role – but it is good for a Gala.

But it was the pas-de-deux from La Esmeralda that was the best surprise. This ballet by Marius Petipa, after Jules Perrot isn’t performed very often and it was a pleasure to see it. The performance of Yolanda Correa and Yoel Carreño was wonderful
. Those two dancers were both trained in Cuba and were Etoiles at the National Ballet, under the direction of the great Alicia Alonso. They are now soloists at the Norwegian National Ballet. Their technique is really amazing, easy and elegant, and their brilliant artistic sense definitely distinguishes them from the others dancers of the evening. On Friday evening, Yana Salenko and Daniil Simkin performed a brilliant Stars and Stripes. But on Saturday and Sunday, as Simkin was injuried, Salenko had to perform the pas-de-deux of the Black Swan, from Swan Lake, very beautiful too though, with Marian Walter, both from the Ballet of Berlin.

. Alys Shee, from the Canadian Ballet Theatre, performed a pas-de-deux from Grand Pas Classique, by Victor Gsovski, very nicely, with very good “équilibres”, which is really important in this variation.

Alternately with the classical extracts, some contemporary works were also danced, and showed a different side of the talent of the dancers. Like Popova and Bákó, who were a lot better in the choreography by Levente Bajàri, Way of Words. Kandelaki and Akhmeteli danced a very beautiful and interesting choreography by Yuri Possokhov, Sagalobeli Pas de deux, on a traditional Georgian music.