Gala des Etoiles of the 21st century in Paris

By Christophe de Jouvancourt on 9/26/12 • Categorized as Ballet 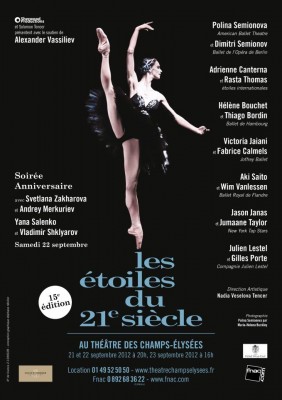 PARIS: The 15th edition of the Gala des Etoiles of the 21st century happened this week-end in Paris at the Theatre des Champs-Elysées. For this occasion a special distribution was programmed on Saturday evening, with Svetlana Zakharova, Andrey Merkuriev, Yana Salenko and Vladimir Shklyarov as special guests. As every year, the show was very rich but one can notice an evolution in the program with more unusual styles, like tap dance or hip-hop and less variations from the classic repertoire.

Polina Semionova is a regular guest of the gala and it is always a pleasure for the audience. She was exquisite in the pas-de-deux of Le Corsaire, by Marius Petipa on the music composed by Riccardo Drigo. Polina Semionova is a real star. She takes care of each detail and has a great personality which she uses for her characters. She recently joined the American Ballet Theatre, after ten years at the Berlin Staatsballett. Her partner was none other than her brother, Dmitri Semionov, soloist at the Berlin Staatsballett. In the second part of the program, she interpreted a work by Renato Zanella called Alles Waltzer on a music by Johann Strauss. Unfortunately, the choreography doesn’t really highlight her, which is quite disappointing

follow up. A small percentage of these deaths occurred What is sildenafil citrate? penile prosthesis may be associated with high rates of.

This edition hosted also unusual guests, like the tap dancers Jason Janas and Jumaane Taylor, who danced Sacrifice, their own creation, on The Rite of Spring music by Igor Stravinsky. Rasta Thomas was also present for the first time in this gala, but is already well-known by the Parisian audience as he has known a great success with his show “Rock the Ballet”. The Broadway star performed Bumble Bee, a short hip-hop choreography by Milton Myers and Vladimir Angelov, on the music The Flight of the Bumblebee by Nicolaï Rimsky-Korsakov. Even if the choreography doesn’t highlight enough his technique, it was a nice and refreshing moment. He also performed a work, choreographed by Adrienne Canterna, called Love the Way You Lie, on the eponymous pop music by Eminem and Rhianna. It was supposed to be a duo but his partner was unfortunately absent and the choreography suffered of it and lost a part of its interest.

One of the best couples of the gala was Victoria Jaiani and Fabrice Calmels, both from the Joffrey Ballet. They performed Age of Innocence, by Edwaard Liang, on a music by Pillip Glass and Thomas Newman, and After the Rain, by Christopher Wheeldon, on a music by Arvo Pärt. The two choreographies are both very sensitive and demanding. The work on the “portées” is wonderful and the interpretation of the dancers was perfect.

Julien Lestel and Gilles Porte, from the Compagnie Julien Lestel, performed an extract of Les Âmes Frères, which they had presented in integrality in January at the Espace Pierre Cardin in Paris. The choreography, for two male dancers, is signed by Julien Lestel and the music is composed by Art Zoyd. It is one of the first works of Julien Lestel as a choreographer, but one can already see a specific style, very fluid and sensual.

Hélène Bouchet and Thiago Bordin, both from the Ballet of Hamburg performed two John Neumeier’s works: “Adagietto”, an extract of La Cinquième Symphonie on the music by Gustav Mahler, and “Meditation”, an extract from Illusions-like Swan Lake on the music of Piotr I. Tchaïkovski. Those two extracts add a more poetic touch to the gala. Aki Saito and Wim Vanlessen, both from the Royal Ballet of Flanders, performed Sonate n°5, choreographed by Maurice Béjart on the music by J.S. Bach and In the Middle Somewhat Elevated by Wiliam Forsythe, on a music composed by Thom Willems
. The two choreographies are very different and show different aspects of the technique of those two beautiful dancers.

This program was very eclectic in the choice of the dancers and choreographers, which is good for the audience who could discover very interesting contemporary ballets. This choice is understandable as the last edition of the Gala happened in January, with a very rich program
concerning the classical parts.