BUCHAREST: Cultural exchange, excellence and new discoveries rank among the hallmarks of this September’s 20th ‘George Enescu’ Festival. The biennial event offers a programme as rich and diverse as any on the international festival circuit, its artistic scope widened this year thanks to heavyweight government investment and distinctive repertoire choices.

Romania’s resurgent capital will host many of the world’s leading orchestras and conductors during its late summer festival time. It’s also set to stage performances of works by great names in Romanian music and outstanding talents among the nation’s emerging cohort of composers. In short, the Festival packs the programme punch and artistic armoury required to attract worldwide attention.

Ioan Hollender, the Festival’s Honorary President and Artistic Director, has fashioned a blend of concerts that projects the event’s core values while charting the direction of its future. The work of the greatest of all Romanian composers, George Enescu, remains central to the programme, as it has since the Festival’s foundation in 1958. Enescu’s legacy and lasting influence on Romanian music surfaces throughout the programme, in the form of his compositions and reflected in works by artists born since his death in 1955, Livia Teodorescu-Ciocănea, Carmen Cârneci and Iancu Dumitrescu not least among them. Past, present and future coalesce in the Festival’s selection of repertoire.

“Enescu’s music remains central to our programme,” observes the Festival’s Manager, Mihai Constantinescu. “We’re delighted that so many international artists and ensembles have agreed to perform the composer’s work this year. Promoting Enescu gives focus to the Festival and reminds the world of the creative power of this great Romanian musician. Every government since we reformed the event in 1998 has recognised that Enescu and the Festival are of great value in projecting this country’s image abroad. We’re doing this in partnership with musicians from many different countries in order to tell the story of Romanian art and culture, which is a rich and evolving tale.

”The ‘George Enescu’ Festival, continues Constantinescu, is determined to make lasting contributions to the development of classical music in Romania. He points to the 2011 edition’s new ‘Music of the 21st Century’ series, which comprises 14 concerts of everything from scores for chamber choir and string quartet to compositions for live instruments and electronic sounds

for ED or a concomitant medical disorder. The How long does sildenafil last? phosphodiesterase V (PDE V), has been approved in.

. Eye-catching series programmes include a recital of new pieces from Iancu Dumitrescu’s Hyperion Ensemble (complete with music by Ana-Maria Avram and Dumitrescu himself) and performances of Guillaume Connesson’s Concerto for cello and orchestra and Cornel Ţăranu’s Remembranza (In memoriam George Enescu). In addition to its 21st-century strand, the Festival intends to unite young Romanian composers with their international colleagues for a day of workshops.“

This year’s Festival offers an unprecedented exchange of ideas between Romanian composers and musicians and artists from abroad,” notes Mihai Constantinescu. “We have a very strong programme, which includes many fascinating contemporary works this year. This is a significant feature of what we are doing to develop our audience for new and existing compositions. The exciting thing is that foreign as well as Romanian artists are bringing their perspectives and ideas to new Romanian music. The Festival will also explore symphonic music from countries not usually associated with it, such as Tunisia, India, Japan and Palestine, in our new ‘World Music’ series.”

In addition to replenishing its contemporary music stock, the ‘George Enescu’  Festival has once again secured a stellar cast of orchestras, ensembles and artists for its 20th edition. Its ‘Great Orchestras of the World’ strand opens on 1 September with Enescu’s First Symphony and Shostakovich’s Tenth Symphony performed by the Residentie Orkest and Christian Badea. It continues on 8 September when the London Symphony Orchestra performs Constantin Silvestri’s Prelude and Fugue No.2, Glazunov’s A minor Violin Concerto (with Nicola Benedetti) and Mahler’s Sixth Symphony in Bucharest’s Palace Grand Hall. The series unfolds with two compelling programmes from the Mariinsky Orchestra and Valery Gergiev (11 & 12 September), the second including Enescu’s substantial Symphony No.3 performed in company with the Academic Choir of the Romanian National Radio Society
. The Staatskapelle Berlin has programmed Bruckner’s Symphony No.7 and Liszt’s Faust Symphony for 13 & 14 September, each work prefaced by a Mozart piano concerto directed from the keyboard by Daniel Barenboim.

Franz Welser-Möst conducts the Vienna Philharmonic Orchestra on 16 September in works by Mozart, Enescu and Dvořák, while Vasily Petrenko and the Royal Liverpool Philharmonic Orchestra present Enescu’s Suite No.2 in C major and Prokofiev’s Seventh Symphony on 17 September. Midori joins Petrenko and his Liverpool musicians in Walton’s Violin Concerto. The RLPO and Petrenko return to Palace Grand Hall the following evening for Prokofiev’s Piano Concerto No.1 and Rachmaninov’s evergreen Third Symphony.

The ‘Great Orchestras’ series concludes with a brace of concerts by the Orchestra Sinfonica dell’Accademia Nazionale di Santa Cecilia and Antonio Pappano (21 & 22 September) and a pair performed by the Orchestra National de France and Danielle Gatti (24 & 25 September), with Hélène Grimaud, Denis Matsuev and Han-Na Chiang as soloists, the latter performing Enescu’s Symphony for cello and orchestra in B-flat minor Op.8 on 25 September. 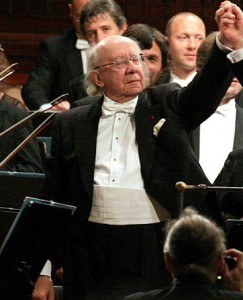 Other Festival highlights include the Academy of St Martin in the Fields in a programme including Dinu Lipatti’s Sinfonia concertante for two pianos and strings (20 September); period instrument performances by the Orchestra of the Age of Enlightenment, the Venice Baroque Orchestra, Il Complesso Barocco and the Amsterdam Baroque Orchestra, and stagings of Wagner’s Lohengrin (3 & 6 September) and Enescu’s Oedipe (15 September) by the Bucharest National Opera House. The Festival’s cast of chamber music performers, meanwhile, reads like a Who’s Who of international recitalists, with Boris Berezovsky, Ian Bostridge, the Fine Arts Quartet, Angelika Kirchschlager, Gidon Kremer, Murray Perahia, Yundi and Christian Zacharias among the list of featured artists.“

Romania’s economy, like those of so many countries in the world, has been affected by the global financial crisis,” observes Mihai Constantinescu
. “But our government has taken the bold decision to increase its funding to this year’s ‘George Enescu’ Festival and provide around 90% of its total funding
. This means that our ticket prices remain affordable to local people and our programming can thrive because of funding stability. The public and the media here recognise that the Festival is something they can be proud of and they understand its place on the international stage. Our international visitors come to Bucharest and discover a Romania that few people expect to find. This is what we want to celebrate and communicate in the 2011 ‘George Enescu’ Festival.” 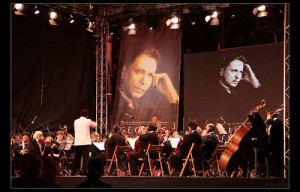