Gerhard Richter in the Albertinum, Dresden

Gerhard Richter in the Albertinum

An exhibition of the Albertinum and the Gerhard Richter Archive

DRESDEN/GERMANY: Following the reopening of the Albertinum in June 2010, Gerhard Richter is reinstalling both of the exhibition rooms that have been dedicated to him

. At the centre of the presentation, which will be opened to the public on 28 February, is a series of four large-format ‘Abstrakten Bildern (937/1-4)’ that were created in the last 12 months.

Gerhard Richter is also displaying four photo versions of the painting in the original format. The pieces trace back to four photographs taken by a prisoner at the Birkenau Concentration Camp in August 1944
. Gerhard Richter had already been studying the pictures for a number of years before he decided to use them as the basis for new paintings last year. In the end, he took an abstract approach to the subject. He had previously explored the National Socialist Holocaust in 1967 and 1997. The materials for these non-realised projects are documented in ATLAS
. 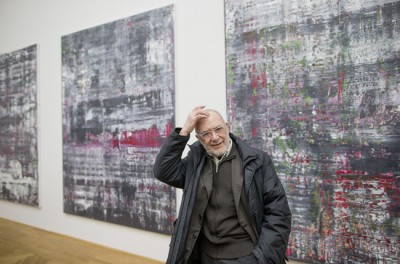 The Maler Gerhard Richter, 25.02.2015 at a Press presentation with his paintings in Albertinum by Staatliche Kunstsammlungen Dresden . Foto: Oliver Killig

This dialogue between painting and photography will be complemented by further images, mirrors and photographic editions. While the first room will contain reflections, sequences and reproductions, the second exhibition room in Dresden will initially showcase the ‘180 Farben (301/1-20)’ colour chart from 1971. The artist presented this 20-part work to the Gerhard Richter Archive as a gift in 2013. Other exhibits, including the recently created ‘Ella’ piece from 2014, which depicts Richter’s daughter and the still life ‘Tulips’ from 1995, illustrate the range of Richter’s œuvre

The rooms containing the works by Gerhard Richter are an integral part of the New Masters’ Gallery walking tour on the second floor of the Albertinum.