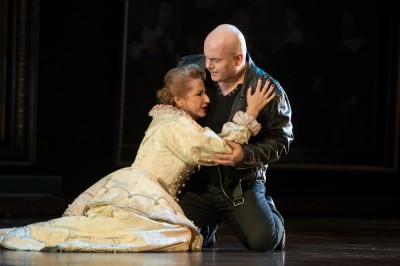 VILNIUS/LITHUANIA: Giuseppe Verdis opera Ernani, one of his Early operas from 1844 is at the program this season at the Lithuanian National Opera in Vilnius. An opera in 3 parts.

The powerfull choires, especially the many male choire parts are a leading element in this history, framing the history around Elvyra, wonderfully sung by Regina Šilinskaitė which in this version is being found in a famouse painting in the Prado museum in Madrid, but from that she is being brought out in her “old” costume to participate in the 1950 framed history.Her role is inclosing many difficult arias, some which for the opera audience is reminding on Viloleta Valerys colerature aria in the first act of Opera La Traviata. 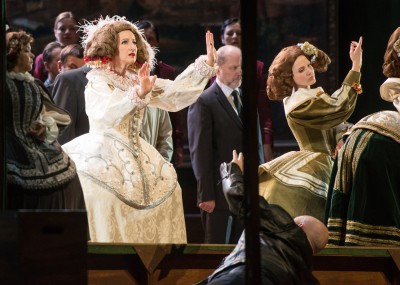 The brilliant cast Gianluca Zampieri (Italy) in the titelrole. Arūnas Malikėnas  was first class as King Don Carlos, Tadas Girininkas presented a very beautiful bass voice as Don Rui de Silva, Regina Šilinskaitė was wonderful as Elvyra, with brilliant coleratura, where every thing is happening around, Mindaugas Jankauskas the young Don Ricardo, Vladas Bagdonas as Jago, they all did a great job. 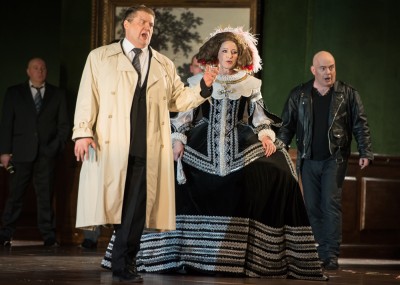 This was the 11th performance at LNOBT
Conductor Martynas Staškus 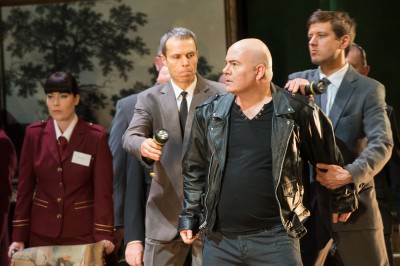 VILNIUS/LITHUANIA: Is it possible to feel like you’re visiting Madrid’s Prado museum, when in fact you’re only attending a performance at the Lithuanian National Opera and Ballet Theatre? This production of “Ernani“ is creating a magic of this exact kind: the concept of the production placed the principal character Elvira inside the pictures of the legendary Spanish painter Diego Velazquez. “In our ‘Ernani’ the three principal men are enchanted by Elvira, woman from the painting,“ – says director J.-C. Berutti. “ We wanted to create a production that would be realistic, but also convey a dream-like atmosphere.“

Ernani is musically in a way fundamented on the many good choire parts, where specially many parts are for only mail choire, the good musically framework is giving us the feeling that we love from Giuseppe Verdis many outstanding operas. His musicality as we know from his many popular and wellknown operas, starting with Rigoletto, La Traviata and Il Trovatore, was allready there when Verdi started some ten years earlier, until he became famouse with these three operas, and could do nealry all he wanted in the opera world.

1 viagra about ED. Not one of the main organic risk factors is.

The tenor Gian-Luca Zampieri who sung the titelrole our evening, is born in Venice and lives currently in Rome.