Herheim and Wagners Meistersinger – a success in Paris

Herheim and Wagners Mastersinger – a success

PARIS/FRANCE: Stefan Herheim has made it again. We have seen his and Richard Wagners Meistersinger in Nürnberg from the Salzburg Festival, and now Herheim has recreated it in Paris, with Opera de Paris outstanding music chief Philippe Jordan at the conductors podium. It looks and sounds wonderful.

In a world where, unfortunately too many fantastic operas from the international repertoire are being modernized, and often spoiled by the directors, scenographers, costume makers, it is like a fresh air to get the possibility to enjoy an opera, where the production team dont want to spoil a good history. 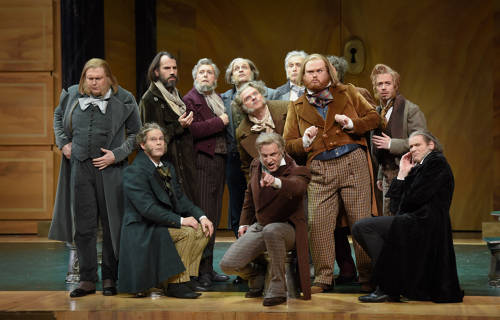 In stead, they are renewing it by very talented staging, dramaturgy, scenography, light and costumes, underlining the good history, and in a way renewing it with talented underlining details, good cooperation in the production team.

In addition, – last but not least, – they manage to inspire all the large team of outstanding solists, choire by intelligently introducing the history they want the artists on stage to perform for the audience, and working with the groups and all the details, so it is functioning to braver for the whole staff on stage, and it even looks like hey have a lot of fun on stage by participating in the Herheim teams ideas.

Heike Scheele has made the most fantasifull scenography, where she is blowing up in fully stage size the writing desk from Hans Sachs living room, and though that making most of the scenes to look like it is a puppet theater performance. Here from first act. Extraordinary good. Foto Vincent Pontet

When furthermore the splendid orchestra, led by its musically chief Philippe Jordan, well taking care off all the musically details, and clearly are present in the production, then it is a success for Opera de Paris. 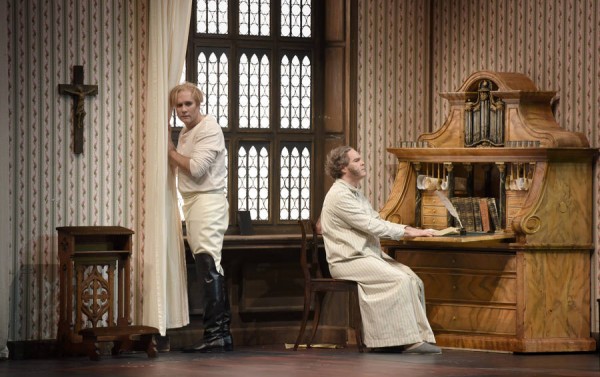 prosthesis. This option is highly invasive and irreversible generic viagra online for sale 4. During sexual intercourse, how often were you.

Central in the Stefan Herheim team are Heike Scheele, scenography and Alexander Meier-Dörzenbach, dramaturge. Furthermore is Gesine Völlm responsible for the very good costumes in north Bayerisches style. The light is originally by Olaf Frees, recreated by Phoenix (Andreas Hofer) and Stefan Herheim. 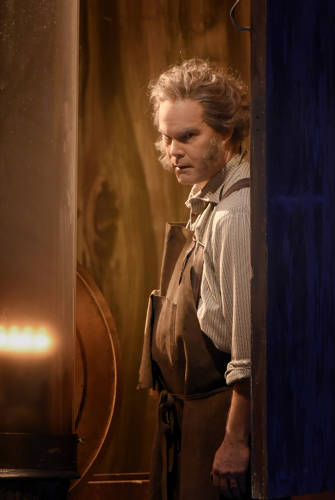 Gerald Frey. A whole line of outstanding singers are needed to fulfill the many demanding parts in Die Meistersingers. In this casting, Hans Sachs sung and played by Gerald Frey was brilliant, always present on stage, and in this version, the one who lead the audience through all the history based on his life. About a man in Nürnberg who made shoes for people´s feet and songs for people´s minds. Hans Sachs was well-loved in his little town as he was highly regarded within the guild of Mastersingers. But in spite of this, he was a lonely man , for his wife and children has all died.

Brandon Jovanovic. The dashing Walther von Stolzing is a stranger in the town. He sings all the beautiful tenor parts, where we see the leading tunes, and in this job Brandon Jovanovic does a very good jobb, his tenor voice is beautiful, he has the power also to lift on topp of the large orchestra, he is a success in the role. The costumier has given him the most elegant outfit, which underlines his role as an elegantier, more exclusive dressed up than the others, and of course, that makes jalousie, and in this is also the background for some of the difficulties that Walther meets in this opera. 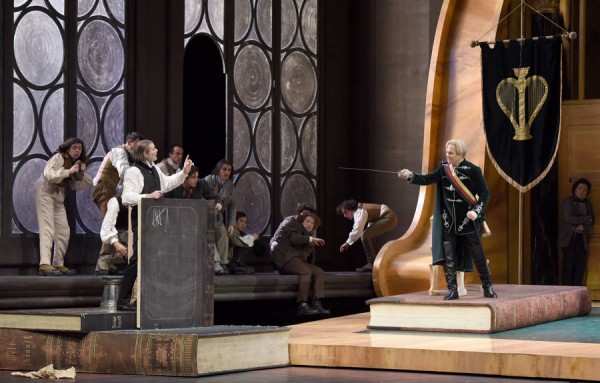 Walther von Stolzing is in love with Eva,  sung by Julia Kleiter, and she loves hm. She is beautiful singing and looking on stage in Gesine Völlm´s beautyfull long dresses, the one more beautiful after the other, she is from a wealthy family, daughter of the local goldsmith Veit Pogner sung by the bass Günther Groissböck. 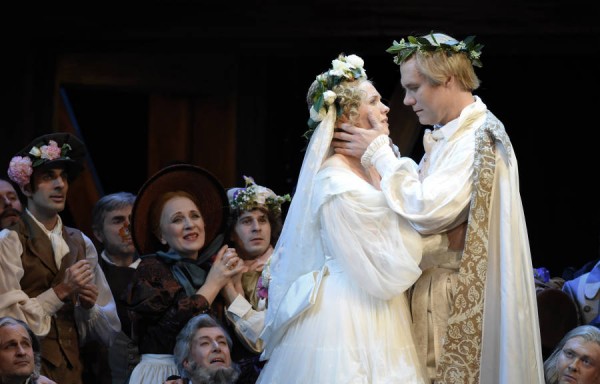 Bo Skovhus. Sixtus Bessmesser is the Town Clerk and member of the guild of Mastersingers, he is also more or less secretly loving Eva, and since her father has promised hers hand to the winner of the Mastersingers competition hold the next day, which is Midsommer day, this is giving problems for the young couple in love, as Walther is not (yet) a Mastersinger. 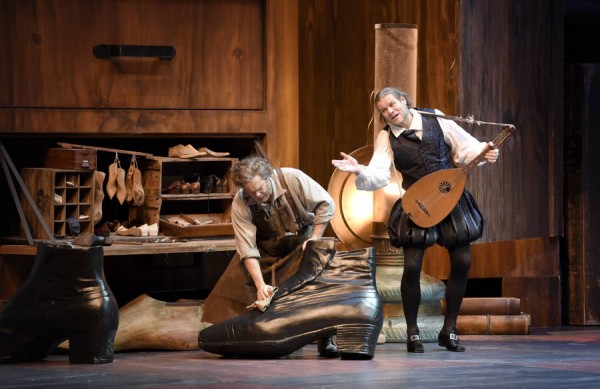 Bo Skovhus, that I have had the pleasure of seeing on stage and in concerts several times, and up to now mostly has liked his very charming version of being Count Danilo in the Merry Widow. He is in this role showing how big a stage capacity he is. Well I do know that the has made a lot of wonderful roles, and already some 20 years ago became Kammersänger at Staatsoper in Vienna. As Bechmesser he is some thing extraordinary, this is really a “Masterwork”. Bravo. 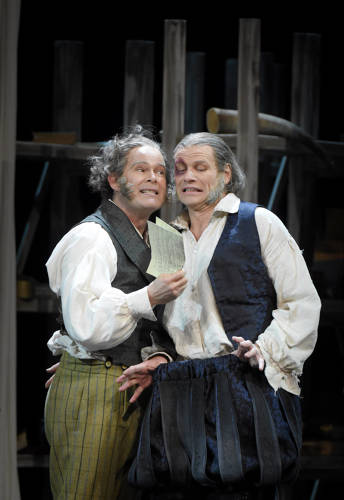 Toby Spence. As the young David we enjoy the young very good tenor Toby Spence. It was a pleasure to listen to his beautiful voice, and enjoy his good playful acting in this production.

I had the pleasant feeling that each of the cast, and in fact also many members of the choir was feeling that they had got created a special role only for each of them, and underlining their natural behavior. Still that the production time, of course, is limited, it seems to me that they all have got a lot out of the rehearsing time. 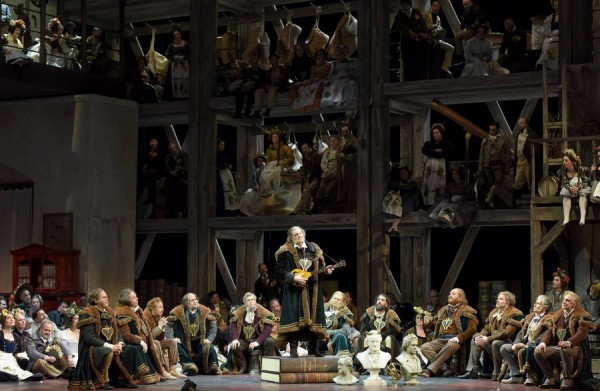 Sixtus Besmesser ) Bo Skovhus= Sings his song, that he hope to win the title, and through that also to win Evas heart. Foto Vincent Pontet.

Musically, Richard Wagners works are demanding, and in the earlier works, like Meistersingers, with so much texts, which goes like fast running dialogues, only a splendid conductor can manage. Why Philippe Jordan is having so much success in Die Meistersinger, is because he has all these talents, musicality, he has the big lines, and is present in every little detail
. 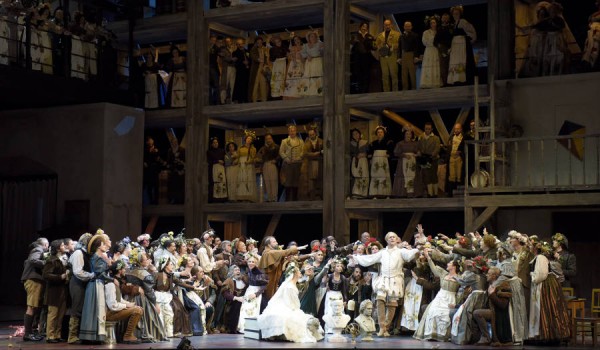 Furthermore with such a great orchestra and very well singing choire, who has done a very good preparation work,  led by its master José Luis Basso. The production deserves the many bravo and extraordinary long applause.

Please enjoy our applause video at You tube: