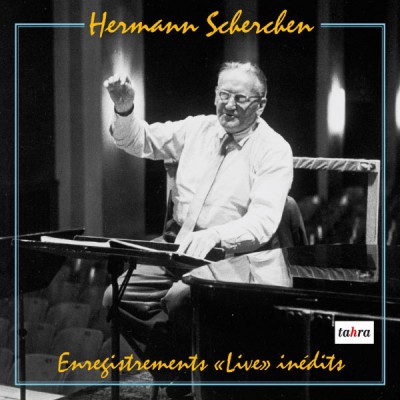 FLORENCE: This Tahra 2 CDs box splendidly portrays the great multiform personality of conductor Hermann Scherchen. It contains music composed in different eras, from Haendel to the 20th Century, and is extremely interesting, first because some of the recordings are previously unpublished, then because others are by authors not usual in his repertoire.

Certainly, Scherchen’s Haendel seems now old-fashioned and rather strange, and not only because today philology is sometimes exasperated, anyway it gives us an idea how Haendel was performed in the Fifthies, and has still a certain old-fashioned charm.

The most interesting track on first CD is A Survivor from Warsaw, a short extraordinary dense page by Schoenberg, inspired by the horror of War and Holocaust. Scherchen’s execution is moving and sharp, very involving, admirable also for the acting of German bass Hans Olaf Hudemann, very professional and sensitive.

In the same first CD we find also a good rendition of Schubert‘s Rondo for violin and Orchestra (solo violin Lore Spoerri) and Ravel‘s Ma mère l’Oye, naive and disturbing, well rendered by Scherchen in its timbric and musical ambiguity.

The opening page of the second CD is really curious: a Scherchen’s re-elaboration of Beethoven‘s Cantata Der glorreiche Augenblick, Op.136. There we find Scherchen’s heroic and modern Beethoven, with a great symphonic breath. Great singers of that time collaborate with him in this occasion, among them Dietrich Fischer-Dieskau.

Don Giovanni’s final scene was recorded in 1957 and is sung in German. Scherchen’s tempi strike us, as they are so large and solemn, so different from Mozart’s rapidity that we often can hear today. The excerpt is so short that it’s impossible to say anything about the singers.

On the same CD there is a very bright rendition of Jeux by Debussy, timbrically refined, and only a part of Bruckner’s Symphony nr 2, whose music wasn’t probably very congenial to the conductor.

The Orchestras collaborating with Scherchen in these CD play really very well, following exactly the intentions of the conductor, confirming the old saying “there are no bad orchestras, only bad conductors”.

Very good the mastering of the CD, average the booklet.

– SCHOENBERG: A Survivor from Warsaw, op

21EVALUATION AND cialis Modified sex therapy may serve as an adjunct to the other.