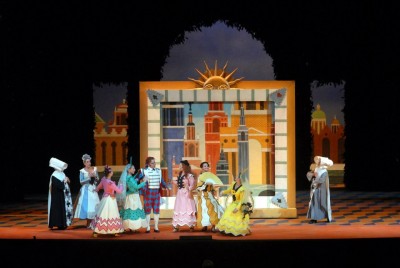 The colourful and surrealistic staging (even too surrealistic for part of the audience) by Josè Carlos Plaza comes back to Florence’s Teatro Comunale where it has been on stage many times in previous years, and it’s like a wave of joyousness, underlined by Rossini’s sparkling music
. The scene’s and costume’s design is purposely almost grotesque, all the scenic elements are deliberately distorted and “excessive”, but in an opera as Rossini‘s masterwork, this can turn out to be one way to see it.

All the characters come in and out of stage continuously, in a whirling of scenic ideas, of gaudy conflicting colours, according to what producer Josè Carlos Plaza and stage designer Sigfrido Martin-Begué wanted, with a lot of Spanish fans and mantillas
. The staging is a classical on Florence’s stage, many singers have acted in this production in past years.

All was sparkling like a glass of champagne, and after having praised the phantasy of Plaza and Martin-Begué, we have to point out the general very satisfying level of the performance, with some excellence. A very good company of young singers, with fresh and well harmonized voices. In the whole, an almost perfect “team play”
.

The singers were to be appreciated more than the conductor Antonio Pirolli, who was mainly interested in keeping a sharp tempo, looking rather extraneous to Rossini’s spirit, which can be wild but must have a lightness in itself, that Pirolli didn’t hold
. So, he was decent in accompanying the singers but was disappointing in the orchestral pages, like the Symphony and the Storm.

Borja Quiza was Figaro. The young Spanish baritone is only 29, his voice is naturally very firm, youthful and clear, even if he has a little experience in sketching his character. That is a quite normal thing for a singer with a short career, but he’s really a very promising artist.
Antonino Siragusa as Conte di Almaviva showed his flexible and well pitched tenor voice. He was also temerarious, singing the very difficult final rondò Cessa di più resistere, what not every tenor does. His voice is very easy, occasionally not well sustained, but as a skilled artist, he takes it as a vocal characterization. In the whole he is a romantic Almaviva, a little sighing one, in the old italian tradition.
Marina Comparato was Rosina. Having heard this singer in the past, her vocal instrument is more and more mature and surprising, with an absolutely impeccable style for Rossini. “Coloratura” is her natural element. She’s also an excellent actress, with a natural verve. Comparato is a quite mature artist, and certainly the catalyzing element of the cast, taking also the difficulties of Rosina’s with the elegance of her way to sing. Not only her capabilities on display, she has been always very expressive and stilistically perfect.

Giachino Rossini. Composer of The Barber of Sevilla.

Nicola Ulivieri was Don Basilio, and the character was wonderfully and quite traditionally sung

. His voice is firm, and his way of singing is rather clean, without too much excesses as sometimes it happens in the italian “basso buffo” tradition.

The Orchestra and the Chorus weren’t perfect, but in the whole  the performance was good, with a good “sense of theater”. The audience was very numerous and satisfied. At the end a long applause.