IL VIAGGIO A REIMS in Florence 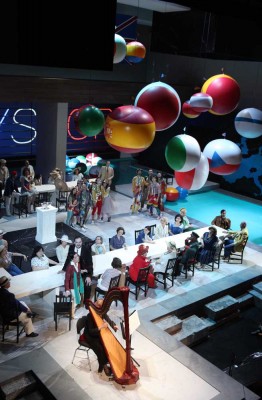 FLORENCE: Rossini composed his scenic cantata “Il viaggio a Reims” for the crowning of Charles X, King of France, and it was performed for the first time in Paris in 19th june 1825
. It was a great success, especially because on stage there were all the greatest opera singers of that time: Giuditta Pasta, Domenico Donzelli, Laure Cinti-Damoreau and many others.

The cantata had mixed fortunes and was later revised by Rossini himself and finally part of the score was used for “Le Comte Ory”. Given the character strictly ceremonial, that work never became a permanent part of a repertoire (except for occasional revivals), so much so that for long time it was even considered  lost.

In the 1980s after a painstakingly search in dusty libraries, looking for those parts not used in  “Le Comte Ory”, the Cantata was brought to light again,  thanks to Rossini Foundation in Pesaro.

Musicologist Janet Johnson, together with Philip Gossett, reviewed the work which was performed at Rossini Opera Festival in 1984, under the conduction of Claudio Abbado and with the staging by Luca Ronconi, one of Italy’s most famous opera director. 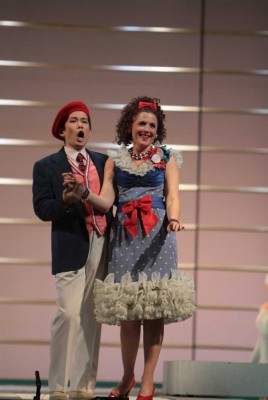 I was among the audience that special evening, and I remember very well the excitement and the feeling to witness  the unveiling of something considered lost.

The event was special thanks to the prestigious presence of Abbado and an incredible group of opera singers, nothing less that the best of opera world in those days, in Pesaro’s Auditorium Pedrotti.

As  in any ceremonial work, the plot is almost unexisting. It’s important the solos and ensemble’s performances executed in an indescribable succession of vocal agilities and pure “belcanto” second only to a very few performances in the entire repertoire of XIX century.  In addition we are also presented with a “quattordicino”, a concertant piece for fourteen voices , an example of Rossini’s extraordinary mastery. 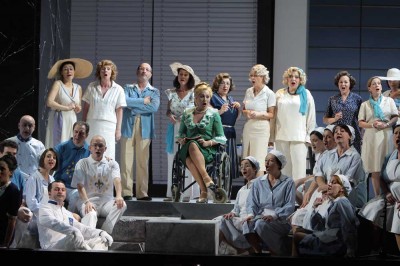 All the characters come to Plombières from many different european countries to honour Charles X. Then it happens that they can’t reach Paris for the crowning of the King
. This group of extravagant people are wonderfully depicted each of them with his little obsessions and peculiarities, coming from their national identities.

“Il viaggio a Reims” needs first quality opera singers with a great personality. In this performance in Florence the artists are of average quality, with some good exceptions, such as young China tenor Yijie Shi as Cavalier Belfiore. He has a small light voice, but well prepared technically.

Michele Pertusi as Lord Sidney sang beautifully his difficult aria, and thanks to his stage presence he was very effective in his acting. Lawrence Brownlee was Conte di Libenskof: he is a well prepared singer, but his small voice shows sometimes too much vibrato.

Marco Camastra’s Don Profondo was correct but his voice is maybe too clear for the part.

Vincenzo Taormina, as Don Alvaro, has no refined voice  but effective. Veteran Bruno Praticò,as Trombonok, is now in poor vocal condition, but the energy he shows on stage wins over the audience. 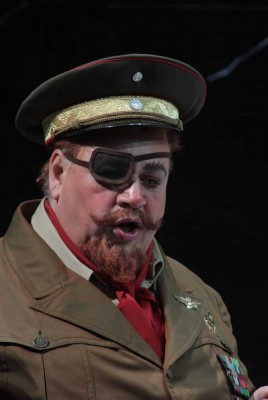 . The remaining singers were all rather correct.

The young conductor Daniele Rustioni was able to keep the orchestra under control.  In the first performance we had the feeling that some more rehearsal could have been useful, especially for a better concertation in the ensemble numbers.

Sometimes he seemed to take care of the orchestra more than the singers, who were left to themselves, free to do and act as they wanted. It’s a pity, because Rustioni  offers us some beautiful and refined moments, as in the dances, and he’s indeed a conductor to take into consideration.

Staging was by Marco Gandini, scenes by Italo Grassi, costumes by Maurizio MIllenotti. Unfortunately for them, people involved in a new production of “Il Viaggio a Reims” have to compete with the ghosts of the unforgotten Pesaro 1984, a production that we talked above, unavoidable term of paragon.

Gandini stages the opera in the colourful modernity of a spa or beauty centre in Plombières, with a pool with a real water on scene, where some opera singers must dive in, risking a bronchial pneumonia… 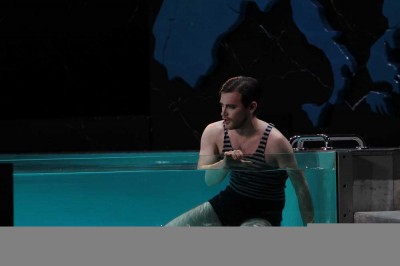 Unfortunately, we see no more ideas on scene, the singers act plainly without a real idea or coup de theatre, which would excite the audience. Any action is foreseen and a dose of finesse and irony are not enough to make a performance effective and enjoyable. In addition to that , the presence on stage of the doctor Don Prudenzio and of some nurses could make us believe that the characters are crazy people in a psychiatric hospital. But that is a my own personal assessment.

On the whole, the audience enjoyed and applauded enthusiastically the entire cast, with some dissent for the stage director.
Review by Fabio Bardelli